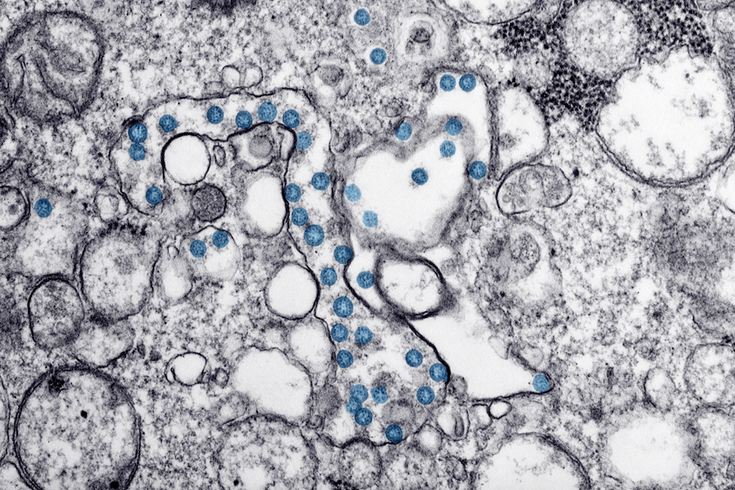 A patient in Philadelphia has been diagnosed with coronavirus, marking the city's first COVID-19 case. Above, a microscopic image of an isolate from the first U.S. coronavirus case. The spherical viral particles, colorized blue, contain cross-sections through the viral genome, seen as black dots.

By the end of the night, the city's annual St. Patrick's Day parade – set to celebrate its 250th anniversary – had been called off.

The case comes as the deadly virus gains a stronger foothold in the United States. Pennsylvania and New Jersey both recently announced several coronavirus cases, which included cases in the Philly region.

"We expected this, but this does mean that the pandemic has arrived to the city of Philadelphia," Health Commissioner Dr. Thomas Farley said at a press conference.

The patient is a man who was exposed to a known coronavirus case. He is being treated in self-isolation at his home. Health officials are contacting anyone who may have been exposed to the patient, directing them to self-quarantine for 14 days.

Officials did not release any additional information about the case, citing patient privacy. The case still must be confirmed by the U.S. Centers for Disease Control and Prevention.

City officials are advising people to avoid gatherings of more than 5,000 people – including sporting events. But they are not recommending the closure of public schools or universities. Some colleges are preparing to shift to online classes.

"If this gets worse, we may be changing those recommendations and lowering the threshold for the size of events," Farley said.

Farley initially urged residents to watch Sunday's St. Patrick's Day parade on television. He said it was safe for participants to take part because the distance between them would mitigate the likelihood of coronavirus transmission. But the respiratory illness could spread more easily among the crowds.

Parade organizers called off the parade late Tuesday night. In a statement posted to Facebook, the St. Patrick's Day Observance Association said the decision was made after "heartfelt consideration and serious conversation with city officials.

"This decision was made with significant input from civic and parade participants," the statement read. "While this decision is disappointing, we acted with a general concern for the well-being of everyone."

Philadelphia infamously went ahead with a Liberty Loan parade in 1918 – when a deadly influenza pandemic threatened the city. Days later, much of the city fell ill. Thousands eventually died.

But city officials did not see it necessary to cancel sporting events – measures that have been taken elsewhere in the world.

Across the country, there are at least 729 coronavirus cases, including 26 deaths, in 36 states, plus Washington, D.C. There are now 12 cases in Pennsylvania and 11 in New Jersey, including one death.

Several other Philly patients have undergone testing for coronavirus in recent weeks, but their test results all came back negative.

You can watch the city's press conference below:

As Pennsylvania health officials announced the state's first two cases, including one in Delaware County, on Friday, Philly officials acknowledged that they anticipate cases in the city. But they said a containment strategy, if implemented effectively, would limit spread of the coronavirus.

"The two most common symptoms of coronavirus infection are fever and dry cough," Farley said. "If you have those, stay away from other people."

Residents with coronavirus symptoms should seek treatment wherever they typically would go for treatment, Farley said.

Any city doctor has the capability to order a test for a patient displaying symptoms. In addition to state labs, LabCorp and Quest Diagnostics also can test for coronavirus.

Symptoms include fever, cough and shortness of breath. Most illness are mild, but a serious illness occurs in about 16% of cases, according to initial data from China.

Older people and those with underlying health conditions, including heart disease, lung disease and diabetes, appear to be at greater risk for developing a serious illness, according to the CDC.

SEPTA has dispatched sanitation crews to clean high-touch areas within its stations and vehicles throughout the day – in addition to maintaining its normal cleaning schedules. And the Philadelphia International Airport is using Envirox Critical Care to disinfect high-touch surfaces, including handrails, elevator buttons and restrooms.

Facial masks provide little benefit to healthy people. They only should be worn by sick individuals and health care workers, the CDC says.

The disease is more deadly than seasonal influenza, but it does not transmit as easily, World Health Organization officials say. There is no known treatment and a vaccine could take at least a year to develop.

Since originating in Wuhan, China late last year, the coronavirus has infected nearly 113,000 people worldwide, killing about 4,000. The virus has spread to dozens of countries.