Both people's diseases are linked to travel, officials say. The other person infected with the virus is in Wayne County 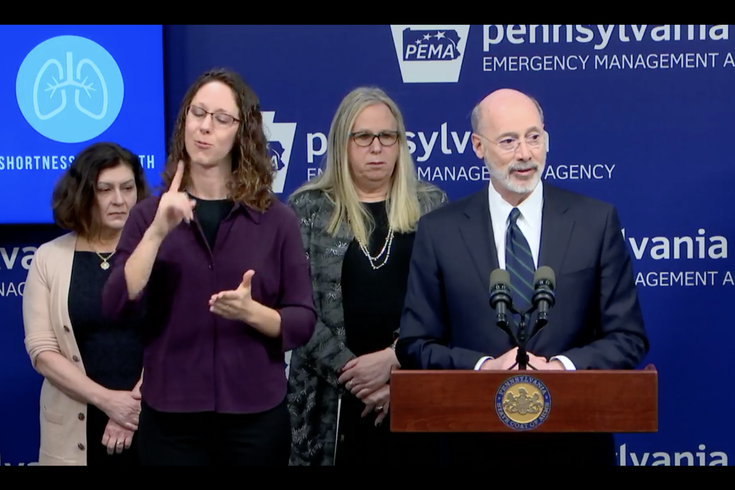 A Delaware County patient is among the first two presumed coronavirus cases in Pennsylvania, Gov. Tom Wolf announced Friday, March 6, 2020. The other person lives in Wayne County. Both are being quarantined at their homes.

Pennsylvania's first two coronavirus cases prompted public officials in Delaware County, where one of the cases is located, and Philadelphia to address plans to contain the virus.

The Friday afternoon news conferences came several hours after Gov. Tom Wolf announced that the coronavirus had spread to Pennsylvania. The second case is in Wayne County.

The patients have both tested positive for the virus, but the results must be confirmed by the U.S. Centers for Disease Control and Prevention.

RELATED: Is Philly prepared for a coronavirus outbreak? City Council to examine emergency plans at hearing

The patients have voluntarily quarantined themselves at home, health officials said, but should that change as Pennsylvania can legally enforce their quarantines. In the meantime, state Health Secretary Dr. Rachel Levine said their conditions are being monitored by phone.

The state also has begun determining the people who have come into close contact with the coronavirus patients.

"Our staff at the incident command center are working through those contact lists as we speak," Levine said.

The people's families are practicing "social distancing," which includes keeping their distance – Levine described it as a "certain number of feet" – from the infected family members while within their homes. The health secretary said those family members will need to be quarantined, too.

Watch the press briefing with Wolf and Pennsylvania health officials below:

Delaware County officials did not provide more detailed information about the patient, including the woman's home town or where she sought treatment, saying that information was being withheld by the Pennsylvania Department of Health.

"They have their reasons for holding back the information," Delco Senior Medical Advisor Dr. George Avetian said. "I don't know exactly what they are. If they feel certain that an individual or group is at risk, they will reach out to them."

News of the two Pennsylvania cases came as Central Bucks School District closed five schools after several students and staffers attended the same private gathering as a person who later tested positive for coronavirus in another state.

Mayor Jim Kenney stressed and city officials stressed that risk of infection remains low to most city residents. But health officials don't expect the city to be immune from the spreading virus.

"It is our expectation that we will likely have cases at some point," Health Commissioner Dr. Thomas Farley said. "If this infection were to spread widely, there is a risk that more people will become sick and there is a risk of social disruption from the disease and from our response."

But Farley stressed that broader efforts – like limiting public gatherings and other social distancing strategies – are not necessary right now.

Instead, he said city officials seek to contain the virus by rapidly identifying cases, isolating victims, identifying close contacts and quarantining those people for 14 days. That strategy has proved effective in China and South Korea, where daily case counts have dropped significantly, he said.

"If we can execute on this strategy, then we can contain this virus," Farley said.

Watch the city's press conference below.

Any city doctor has the capability to order a test for a patient displaying symptoms. In addition to state labs, LabCorp and Quest Diagnostics also can test for coronavirus.

But Farley encouraged doctors to only order test for patients who have coronavirus symptoms and have either traveled to affected areas or come in contact with someone believed to have coronavirus.

"This is not a cold –  this is an infection of the lung that causes a fever and dry cough," Farley said. "If you get these symptoms, stay away from others."

SEPTA is dispatching sanitation crews to clean high-touch areas within its stations and vehicles throughout the day – in addition to maintaining its normal cleaning schedules, Assistant General Manager Jim Fox said.

RELATED: What is a pandemic – and will the coronavirus outbreak become one? Health experts weigh in

Delco officials said they had been preparing for potential coronavirus cases for several weeks. Sanitation upgrades have been made in county buildings and they are planning to stream a public information session for residents.

But the county lacks a formal health department – and that has made the its response more challenging, officials said.

After the state's press conference, Levine tweeted a state graphic containing tips for residents to create their own home emergency kits.

We are urging all Pennsylvanians to be prepared for potential life disruptions. NOW is the time to restock your emergency kit. If you don't have a kit, build one and include these basic items ⤵️ #COVID19 pic.twitter.com/0ur3lP8SYA

Across the country, The CDC had confirmed 164 cases, including 11 deaths, in 19 states through Thursday afternoon. Another 49 repatriated Americans, most of them former passengers of the Diamond Princess cruise ship, also contracted the virus.

Coronavirus symptoms include fever, cough and shortness of breath. Most illness are mild, but a serious illness occurs in about 16% of cases, according to initial data from China. The incubation period is believed to be 2-14 days.

Older people and those with underlying health conditions, including heart disease, lung disease and diabetes, appear to be at greater risk for developing a serious illness, according to the CDC.

RELATED: Health officials should begin preparing for the next viral outbreak now – even as coronavirus keeps spreading

There is no known treatment for COVID-19 and a vaccine is expected to take at least a year to develop.

Face masks provide little benefit to healthy people. They only should be worn by sick individuals and health care workers, the CDC says.

The disease is more deadly than seasonal influenza, but it does not transmit as easily, World Health Organization officials say.