The coronavirus outbreak has people rushing to buy face masks – but do they work? 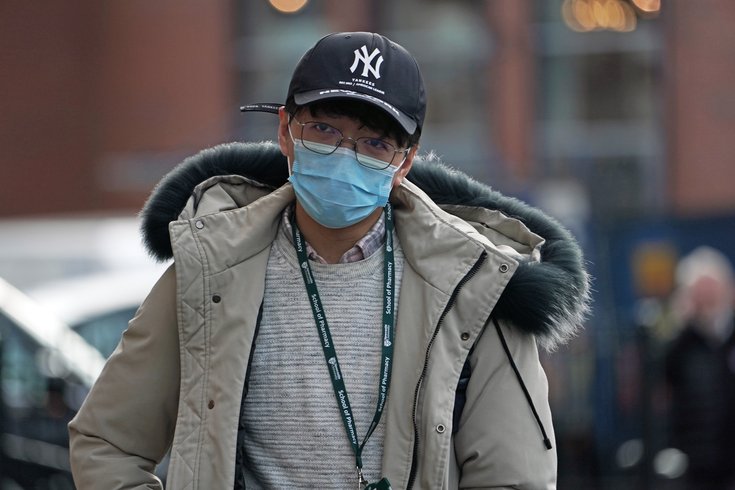 As the novel coronavirus spreads, demand for surgical face masks has surged in both China and the United States. But health experts say they likely do little to prevent coronavirus infection.

The novel coronavirus outbreak in China has prompted a rush to buy face masks as people search for protection against the deadly disease, which has stoked fears reminiscent of the SARS epidemic two decades ago.

Most masks do little to prevent a healthy person from becoming infected, experts say. And the ones that provide substantial benefits – like the N95 mask worn by medical professionals – really aren't necessary for the general American public.

"Your risk of picking this up is really small unless you are in close contact with somebody who is either a confirmed case or somebody who is sick and had recent travel to China or recent exposure," said Dr. Ebbing Lautenbach, chief of Penn Medicine's division of infectious disease. "Then your chances are higher."

Of course, masks are not new to the coronavirus outbreak. Philadelphians wore masks during the 1918 influenza pandemic. They became the defining image of the SARS outbreak in 2003. And it's not unusual to see someone wearing one in an airport or while on public transportation.

Masks do provide protection to people in the same room as a sick individual – like caretakers, experts say. But wearing them out in public, where airflow generally is far more bountiful, provides few benefits.

Many respiratory illnesses, like influenza, produce large, heavy droplets that do not linger in the air very long. They instead fall and contaminate nearby surfaces. But other pathogens, like tuberculosis, produce much smaller particles – known as aerosols – that hang in the air for lengthy periods of time.

The disposable surgical masks commonly found at drugstores can prevent exposure to large respiratory droplets – if their wearers avoid touching the mask's exterior. But because they are not form-fitting, smaller airborne particles can get by.

"It will prevent you from getting any large droplets in the mouth and nose, but any smaller droplets can sneak in between the gaps in the surgical mask," Lautenbach said.

Previously discovered coronaviruses have been found to spread via large droplets. But because there is much to learn about the novel coronavirus, doctors are responding as if it is transmitted via aerosols. That means they must wear form-fitted N95 respirators, as well as eye protection, when treating coronavirus patients.

Doctors took the same precaution during the SARS and MERS outbreaks.

"They're all coronaviruses," said Dr. John Zurlo, division director of infectious disease at Jefferson Health. "Theoretically, they would all behave the same way. But in the early part of these epidemics, we're just taking it up a level."

The N95 respirators, known for being uncomfortable, protect against 95% of particles – both large and small. But health experts say there's no reason for the general public to wear masks of any kind.

"It is unnecessary," U.S. Health and Human Services Secretary Alex Azar said on Tuesday. "In the United States, the risk to any individual is extremely low."

Dozens of other potential cases, including one in Philadelphia, remain under investigation.

Additionally, infectious disease experts continue to note that the flu poses a far more serious risk than the novel coronavirus. At least 8,200 people have died this flu season, according to the CDC.

Yet, surgical masks are mostly an unnecessary precaution against that, too. That's because people generally need to be in close proximity to a sick individual to become infected.

"When people cough or sneeze, we know that the germs live on these droplets," Zurlo said. "They're rather large, heavy particles. The whole premise is that when we cough, there's a trajectory to them.

"The reality is when (doctors) walk into rooms ... we put on one of these masks. But frankly, if you don't go within three feet of the patient, you don't need to wear one."

Because flu viruses survive much longer on hard surfaces, health officials say the best way to prevent illness is to practice good hand hygiene. That means washing your hands with soap and water for about 20 seconds. Hand sanitizer also provides some benefits. And when possible, avoid people who are sick.

But surgical masks are particularly effective in one regard – when they're worn by people who are already sick. Doing so reduces the amount of germs being spread by the infected person, preventing others from falling ill. That's why doctors request patients with flu-like symptoms wear them upon arriving at emergency departments and primary care offices.

If a patient with a potential coronavirus case came to Cooper, medical personnel would have the patient wear a face mask and place them in isolation. Such steps are "highly effective" at preventing spread of disease, Fraimow said.

Additionally, some people with weakened immune systems might benefit from wearing surgical masks, particularly when traveling or passing through crowded spaces. There are various respiratory illnesses spreading at this time of year.

"There might be a reason for those individuals to wear a mask," Fraimow said. "For otherwise normal, healthy individuals, there wouldn't be a reason to go out and stockpile masks right now."