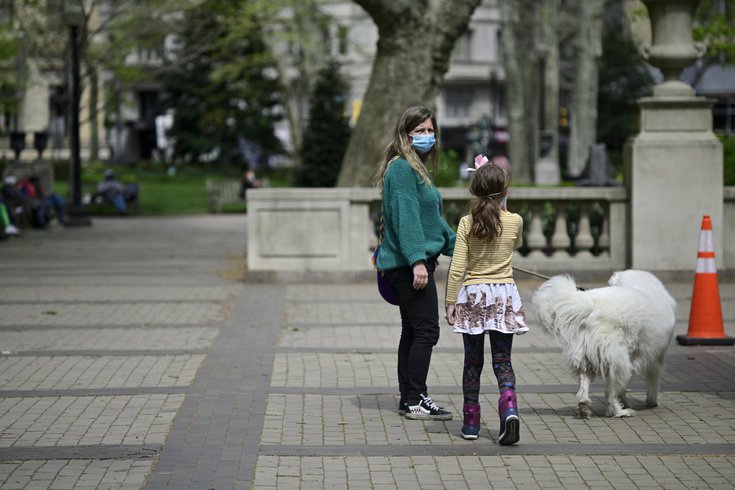 It will be critical for residents to wear face masks when Philadelphia advances to the yellow phase of Pennsylvania's reopening plan, Health Commissioner Dr. Thomas Farley says.

As Philadelphia gradually moves toward the yellow phase of Pennsylvania's reopening plan, city officials are preparing guidance for residents.

"Wearing a mask is going have to become normal, expected behavior," Farley said. "This is what we do when we're around other people. In the future, it's going to have be that going into a store without wearing a mask is like it is now to go into a store without wearing a shirt. It's just something that people don't do. If you haven't done it yet, get a mask and get used to wearing it."

Philadelphia still remains well above the state's threshold for entering the yellow phase, but as daily case counts begin to drop more rapidly, that stage now appears within striking distance.

The city reported an additional 227 confirmed cases of COVID-19 on Wednesday, bringing the city's total to 20,359. Hospitalizations in the city and the region remain lower than where they were in recent weeks.

"We are getting closer to reopening," Farley said. "We clearly don't have a date yet where we can move to the yellow phase. Everyone wants to know when that date is. Even I want to know. We can't give you a date now. I want to focus less on when we reopen and really start thinking about how we reopen."

Philadelphia officials have urged better compliance with the request to wear face masks in recent weeks. Pennsylvania requires that customers and employees wear them in life-sustaining businesses, but people also are encouraged to wear them when going out in public, whenever possible.

The issue of wearing masks has become a source of tension in some settings. From a viral video at a Costco store in Las Vegas to an argument between two Montgomery County commissioners earlier this week, the strong guidance on masks has led to disagreements.

Some of this can be attributed to the U.S. Center for Disease Control and Prevention's early reluctance to advocate that the public wear face masks, which was partially due to a severe shortage of medical-grade personal protective equipment.

Wider availability of cloth masks, as well as guidance on making at-home face coverings, later resulted in the CDC encouraging people to wear them as a means of preventing people from spreading the coronavirus.

More evidence in support of wearing masks emerged this week from Hong Kong, where a study using hamsters demonstrated significantly reduced transmission of SARS-CoV-2 in several experiments. Hamsters have similar enzyme receptors to humans, which is why they were chosen as the test animals for the first-of-its-kind study.

While there are psychological barriers associated with putting on face masks, Farley believes they are an essential part of safely reopening Philadelphia.

"Whenever we do reopen, we know that if we don't reopen in a safe way, the epidemic will return and then we'll have to have another shutdown," Farley said. "Nobody wants to have that happen."

Philadelphia officials announced 103 additional fatalities on Wednesday. Many of them are the result of a reporting backlog.

The delayed reporting is due to an occasional a lag between the time a COVID-19 case is reported and when a death certificate is received by the health department to match database records. In some cases, the city receives news of a person's death directly from a hospital. Other times, that confirmation comes from a medical examiner or a coroner.

But in certain cases, the city only learns of a death weeks after it occurs. Then, the information on the death certificate can be matched with a prior reported case of COVID-19.

With the additional fatalities, the city's death toll rose to 1,152, including 622 nursing home residents.

Earlier this week, Pennsylvania released a complete list of nursing home data, including the number of COVID-19 cases and deaths each facility has recorded. More than 2,800 nursing home residents have died in Pennsylvania, representing more than 60% of the state's fatalities from COVID-19. Southeastern Pennsylvania nursing homes are among the hardest-hit in the state.

In Philadelphia, Immaculate Mary Center For Rehab & Healthcare (91 cases, 32 deaths) and Oakwood Healthcare & Rehab Center (91 cases, 30 deaths) were among the 20 nursing homes with the most fatalities in the state.

Though the city has made progress reducing infections in congregate care settings, such as nursing homes, Farley said the crisis demonstrates that operational changes may be necessary.

"We do need to think about how we restructure or change the way we operate those institutions in order to be more protective in the future," Farley said. "They don't have the kind of resources that a hospital does to prevent infections spreading from one resident to another. Reform may not be too strong of a term to talk about the changes we need to make in order to solve this problem."

"I would say that (in Philadelphia), we feel like more progress has been made when hospitals work with nursing homes to provide the kind of expertise and additional resources that a hospital has to help them with infection control in that facility. We're encouraging hospitals to step in and work with nursing homes in a supportive way. There may be some role to formalize that, to have hospitals and nursing homes have affiliation agreements where they can provide support on an ongoing basis in the future."