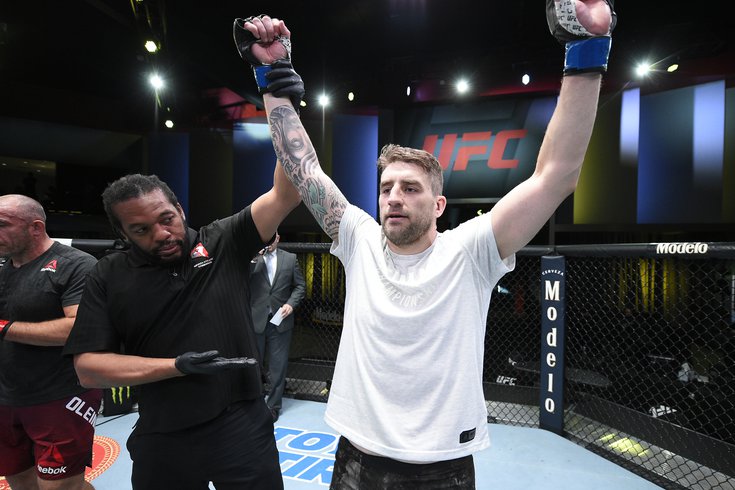 Chris Daukaus reacts after his TKO victory over Aleksei Oleinik of Russia back on February 20, 2021.

Chris Daukaus was on that life track to nowhere. The kind that you’re supposed to follow. You play sports in high school, graduate, then go to college, get your degree and find a job that pays with benefits. Only each time his 1996 dark green rusty Chief Cherokee Sport huffed and puffed its way down Oxford Avenue, this small, redbrick building with the flags in front kept drawing his attention out of the corner of the passenger’s side window.

The Semper Fi Mixed Martial Arts Academy continued pulling his eyes in that direction on his way to Penn State Abington. A 2007 graduate of now-defunct North Catholic, Daukaus began imagining himself in a mixed martial arts fight—just one. For two years, it remained a thought, as Daukaus passed by Semper Fi and always found an excuse not to walk in—until one summer day in 2009 he decided to put his foot down inside.

He didn’t want to be plagued by the question of “What if?” He bought grappling Sprawl shorts, a compression shirt, a nasty pair of MMA gloves and boxing gloves. If he tried it and didn’t like it, he would have peace of mind. He would have the satisfaction of one MMA fight.

Over the last 12 years, Daukaus answered “What if?”

On Saturday, Daukaus, 31, a 10-year Philadelphia police officer, will be fighting on national TV on ESPN’s UFC 266, as part of the featherweight championship (Alexander Volkanowski-Brian Ortega) undercard. The fight goes down at 10 p.m. at the T-Mobile Arena in Las Vegas.

Daukaus is the UFC’s No. 10-ranked heavyweight contender in the world. He’s 6-foot-2, 235 pounds and is 11-3 as a professional and about to have a career-defining fight against 39-year-old veteran Shamil Abdurakhimov. The 6-foot-3, 261-pound Russian is the UFC’s No. 7 heavyweight who’s been an MMA fighter for 13 years and has a 20-5 record.

If Daukaus wins, it could thrust him into the UFC’s top five, placing him two fights away from being in the conversation of a world championship shot.

He’s managed an incredible, careful balance of being a fulltime policer officer with being a world class MMA fighter.

In 2009, Daukaus walked into Semper Fi in his MMA gear and told the first person he saw, Semper Fi owner Julio Rosario, that he was there to train.

Daukaus was always large for his age and graduated North Catholic, where he played lacrosse and football, at close to 300 pounds. Daukaus was able to handle himself well, but found this was a new world he was entering.

He was being tossed around like a ragdoll by men half of his size. Daukaus doesn’t recall much specifics from those early days, just one giant blur getting his ass kicked.

“That was the hardest thing I had to get used to. What made me stay with it was training with guys who fight professionally at 145 pounds, 155 pounds, or 185 pounds,” Daukaus said. “These guys were absolutely kicking my ass and it was something I thoroughly enjoyed, because I was able to learn.

“Obviously, nobody likes getting their ass kicked. But to learn the things these guys were teaching me, then to apply them to guys my size or bigger hooked me in. I was done. I was in. I loved it. I remember facing this smaller guy my first time, and I was thinking to myself that I didn’t want to break them, and after the first minute, I began thinking ‘Don’t let this guy break me.’

“There is ego involved. But I learned everyone gets their ass kicked—everyone. A lot of people can’t face that reality and that’s the biggest problem with a lot of people and MMA.”

Will and Jose Martinez, who both train Daukaus, were among his early tutors, with Sammy Oropeza, Rosario and Stephen Haigh, one of the founders of the “Fight Factory.”

Around the same time Daukaus was being introduced to the bad-ass ecosphere of MMA, another aspect of Daukaus’ life began to surface. He was in college, but he didn’t know what he wanted to do. There was no pressure to finish. He would figure it out after graduating. In the meantime, Chris’ father, Chris Daukaus Sr., would remind him about taking the police exam.

A year later, in July 2011, Daukaus entered the Philadelphia police academy and graduated in March 2012. He would wake up early in the morning, attend the academy, come home for dinner and train at night. It was nine months of hell—and Daukaus wouldn’t change a second of it, while still driving the dark green blotched Chief Cherokee Sport.

Probably the toughest part was telling Chris Sr. that he was thinking about pursuing a career in MMA. Chris Sr. was a decorated Philadelphia police sergeant in the SWAT unit. He was proud Chris was following his path. He didn’t want anything to deter that journey.

“Dad definitely didn’t like it at first. We definitely had words about it and were at each other’s throat,” Chris Jr. says laughing now. “I was about to take my first amateur MMA fight before I entered the police academy. Fighting MMA is a lifestyle and my dad didn’t want me to ruin my chances of being a police officer by being hurt fighting.

“My dad didn’t begin coming around until a few fights into my pro career. He would always come to the fights, but never really thought of it as a career path. It’s funny that today, I don’t have a bigger fan than my dad, other than probably my wife.”

Four fights into his pro career, Daukaus encountered a touchstone moment. He lost by second-round submission on Dec. 4, 2015, to a fighter named Shawn Teed — someone he was supposed to beat. Daukaus was 2-2 and looking at a career crossroads, either being a “gatekeeper,” wearing the tag of being a tough out, but a B-side fighter expected to lose, or make a personal inventory on what it would take to become a contender.

“I destroyed myself in every possible way,” Daukaus recalled. “My wife (Kelly) and brother Kyle drove home the adjustments that I needed to make. She saw how I was training, and my brother saw what I was doing. I was only going to the gym when I could. I wasn’t making the gym a priority. I was only taking fights to fight, because during my amateur days the fights came easy, and I thought they would always be easy.

“The pros were different. At that moment, I made the realization I had to make a commitment to this, or get out.”

Will Martinez, Daukaus’ primary trainer and the owner of Martinez BJJ on Cottman Avenue, remembers when Daukaus came back to the gym after the Teed defeat. Daukaus entered the gym that day with his head bowed, his eyes following his toes.

Martinez pulled him aside and they had a talk. He basically told Daukaus to get his head out of his ass — and Daukaus agreed.

“Fighting is 90 percent mental and 10 physical and we sat and talked on the mat,” Martinez said. “Chris has all of the ability in the world, he works extremely hard, and everyone knew what the problem was. Chris had to commit more to the sport. I’m a blunt and up-front guy.

“Chris had that fight won and he knew it. He mentally wasn’t there. That was the moment when Chris realized he could be No. 1 in the world and he’s doing it. Chris looked at me, and I looked at him and we both said, “Let’s get right back at it.’”

Daukaus is 3-0, all first-round finishes, as a UFC fighter with Abdurakhimov next.

“I see Chris showing his total skill set, but this guy Abdurakhimov is no joke and Chris will get a chance to show everything he’s able to do,” Martinez said. “Ideally, we want Chris to land some big shots and the guy goes night-night. But no one has seen what Chris can do on the ground, in the cage, they haven’t seen it at the UFC level.

“It’s been a long road. I remember Chris and Kyle when they first came to the gym and you see how they’ve developed. Over time, Chris and Kyle got physically strong. Everyone that walks into the gym for the first time gets a rude awakening. Chris was able to accept that and kept coming back.”

Daukaus didn’t start making real money until he joined the UFC. Proceeds from his early fights were based on ticket sales, and sometimes, he wasn’t paid at all. Now he’s demanding six-figure paydays.

“Everything is coming together right now,” said Daukaus, who’s received numerus accommodations for bravery and life-saving acts. “I’m committed three hours a day in the gym and the police department has treated me very well. They’ve given me the freedom to pursue my dream. A lot of credit has to go to Kelly, my wife, who puts up with a lot and us being together before I began being both a police officer and my MMA career is a huge plus.

“She had unwavering dedication, especially during the tougher times early in my career, and I couldn’t be in the place I am right now without her. I’m also very proud to be a Philadelphia police officer. I took the career path of being a police officer because I love helping people. My MMA experience has helped me become a better police officer.