Philly's million-dollar battle against graffiti is a game of tag 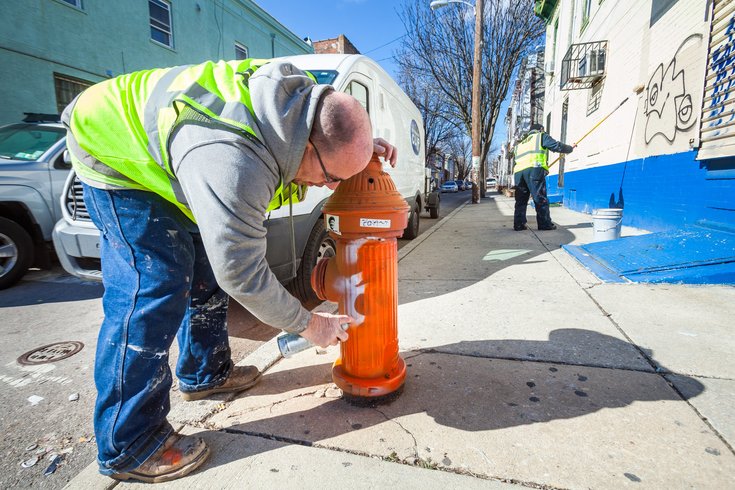 Tim Farnon, left and Jonathan Heard clean graffiti at the corner of Fifth and Dudley streets in South Philadelphia.

Tim Farnon and Jonathan Heard were clearing graffiti from a vandalized South Philadelphia building when they were acutely reminded that their hard work and persistence is matched by their counterparts.

"They're just going to spray paint it again," hollered a woman who was parking a minivan alongside the graffiti-covered wall of a nearby corner store.

Indeed, the buildings at Fifth and Mifflin streets have been tagged repeatedly by graffiti writers. But no matter how many times they are vandalized, Heard and Farnon – or other crews in the city's Graffiti Abatement Team – will return to clear it.

It's all part of a decades-long tug-of-war between the city's Anti-Graffiti Network and those who use the city's walls as their canvas.

"Wherever graffiti is," Farnon said, "we take it off."

But without the removal crews, Deputy Managing Director Thomas Conway said Philadelphia would be inundated with graffiti.

"Our position is they're the victim of a crime," Conway said of the private property owners so often targeted by graffiti writers. "No one wants graffiti on their property. We'll clean it up free of charge."

More than 9,100 graffiti removal requests were made to Philly311 last year, a decline from 11,563 in 2014. To meet those requests, the city employs 11 graffiti removal crews and an abundance of tools. 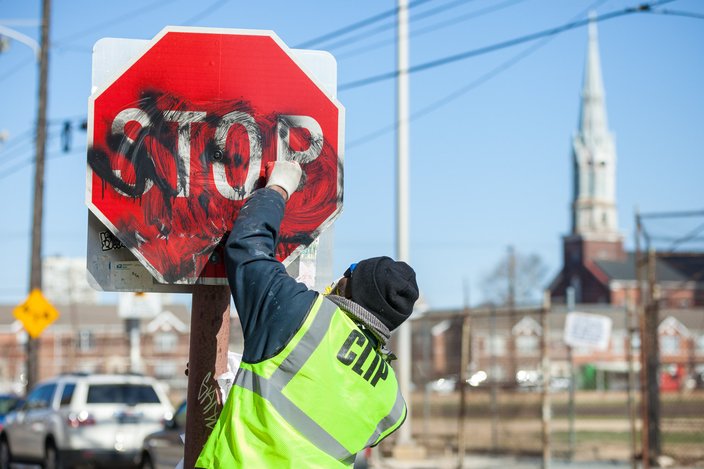 Jonathan Heard cleans a stop sign that was tagged near Fifth and Washington streets.

On a morning earlier this month, Farnon and Heard zipped around South Philly, working through a list of 13 vandalized locations that included corner stores, abandoned buildings, mailboxes, road signs and curbs. They seemed unbothered by a biting wind and temperatures in the low 30s.

"We're out here when it's 17 out here," Farnon said, noting the previous week they worked through a steady rain.

"We've experienced it more than 1,000 times – that we've done something and it's been hit less than 24 hours after we removed it. They'll hit it harder the second time, just to let us know they're here." – Jonathan Heard, Graffiti Abatement Team member

Farnon and Heard drive a van equipped with more than a dozen 5-gallon buckets of paint, numerous spray cans, several rollers and an industrial powerwasher. If necessary, they retrieve ladders or use a bucket lift to reach graffiti painted in higher locations.

Graffiti found on unpainted surfaces is powerwashed after being coated with acetone. Vandalized, painted surfaces get repainted the same color. Other surfaces, like road signs, are sprayed with paint remover and scrubbed until the graffiti disappears.

It is a straightforward, often simple task. But it is also an endless one, with many sites repeatedly hit.

"I don't get frustrated," Heard said. "We've experienced it more than 1,000 times – that we've done something and it's been hit less than 24 hours after we removed it. They'll hit it harder the second time, just to let us know they're here."

Heard and Farnon laughed as they recalled a message they found earlier this year. Someone had written "buff this but don't buff that" underneath a pair of graffiti tags, using the lingo for graffiti removal.

"We frustrate them," Heard said. "They feel our presence." 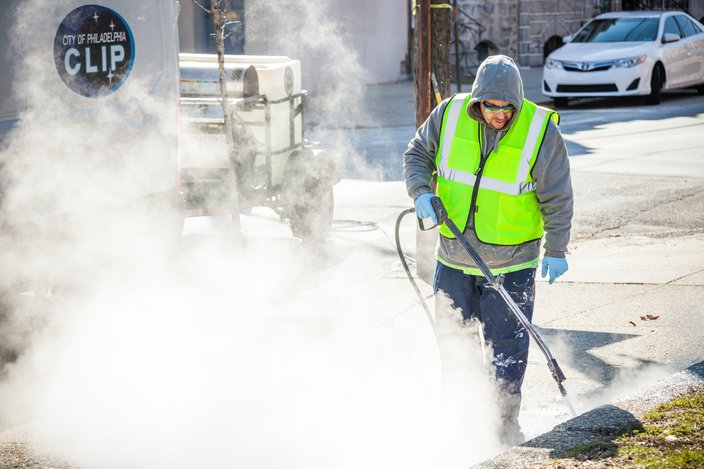 After applying acetone to the graffiti, Tim Farnon pressure sprays and cleans a curb at Fifth and Ritner streets in South Philadelphia.

Most graffiti removal crews operate within a specific zip code, enabling them to become familiar with their coverage area. But Farnon and Heard work citywide, often tasked with removing larger graffiti tags in South Philly and Center City. They've taken paint sprayers up hills and climbed on ledges on their seemingly-Sisyphean sweeps.

"Anything higher than the second story, we use a bucket (truck)," Farnon said. "Sometimes, we'll go to the back of the building and use the fire escape."

Farnon was working on a just few hours of sleep, having completed an overnight shift clearing graffiti along I-95, where a bucket truck is needed to vanquish graffiti from neighboring houses. Work along the interstates often happens overnight so PennDOT can close a lane to help protect the workers.

Similarly, Amtrak closes its rail lines so crews can clear the vast graffiti from the train tracks near 30th Street Station. Farnon described the process, which only happens a few times a year, as an entire night of powerwashing.

The job is done knowing the areas along the rail lines are likely to be hit by graffiti writers again.

But despite that reality, Heard says the crews receive a lot of positive feedback.

"I think more people are focused on the damage that it's doing," Heard said. "We get more compliments than we get complaints."

Philadelphia residents and business owners can request graffiti removal by calling 311 or (215) 686-8686, or by reporting graffiti online.