Months-long debate pitting pre-K (and the fund balance) vs. jobs (and tax foes) ends (for now) with Council’s 13-4 vote

For the circus sideshow that City Council’s soda tax had become in recent months, it was only fitting that Thursday’s meeting in the jam-packed chambers would feature a mariachi band playing “Cielito Lindo.”

Sure, the band was at City Hall to honor Mexican Consul Carlos Giralt Cabrales, but was a cheerful way to mark the near-end of a heated debate that saw Mayor Jim Kenney get a major victory in his first six months while exposing fault lines within the legislative body’s power structure.

They would be gone after about 10 minutes, ceding the stage to discussions of the Juneteenth Event in Germantown, the Business Journal’s 40 Under 40 folks and the introduction of bills and resolutions at Council’s last session before summer break.

The room wasn’t standing-room only for the next few hours because of any of that, though.

What filled the room and fifth-floor balconies with sign-toting partisans – some read “Thanks For Investing In Our Kids” while others went the “Money Grab” and “Sales Tax in Disguise” route – was Bill 160176, tucked away on the eighth page of a 25-sheet agenda.

The 10 a.m. meeting didn’t get underway until 11:25 p.m., a delay Clarke chalked up to “administrative functions we had to take care of.”

The agenda itself was as packed as the room, leading Council to lump a slew of votes into a “consent agenda” which enables councilmembers to dispatch with easy votes collectively and quickly. 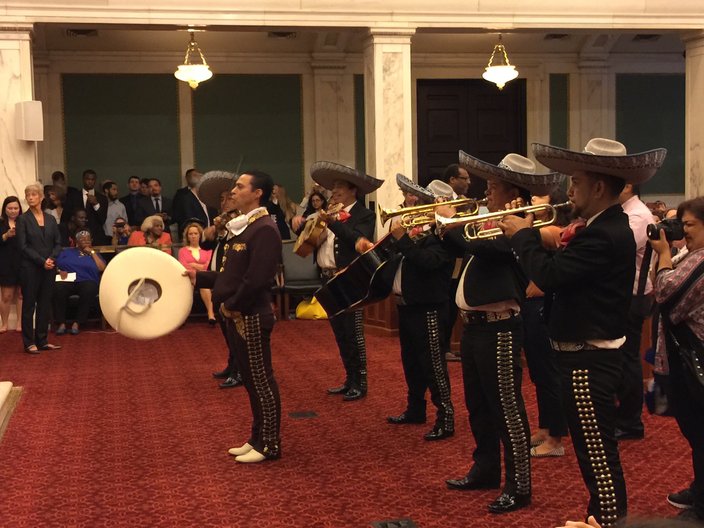 Keeping true to the circus-like atmosphere of Philadelphia City Council's recent months, a mariachi band played in City Hall early on in a long last session.

But it being a public meeting led by a public body, the public-comment segment of the proceedings started at 12:42 p.m. with Clarke noting that they’d hear from people who wanted to talk about matters not tied to the “beverage, soda, whatever we’re calling it today” tax.

“Good afternoon," responded Clarke, who once referred to the matter that everybody was waiting for a vote on as “ridiculous.”

Soon, there would be a man chanting “Stop Trump Now” into the microphone while others railed against the city’s apparent inability to recoup delinquent taxes. The next speaker would violate the No “Beverage, Soda, Whatever We’re Calling It Today” edict, but Clarke wasn’t there to see it (Councilwoman Blondell “Absurd Container Tax” Reynolds Brown was sitting sentry at the council president’s chair). Other hot-button topics for those speakers: A pending real-estate tax and the need for an audit of the Philadelphia Parking Authority in the age of Uber and Lyft.

At 1:22p.m., the public-comment portion finally shifted to 10 folks – including a "lifelong friend of libraries" – who’d signed up to talk about the Beverage, Soda, Whatever We’re Calling It Today tax.

The catcalling from the peanut gallery started when a “citizen” spoke in support of the tax framed as being a good counterbalance to diabetes and obesity.

Those same hecklers (including the loudest voice at the June 9 meeting) cheered when another speaker mentioned that he might have to move out of the city because of the BSWWCIT tax, though. (He also mentioned concerns that this could create a “black market” for soda sales over which the city has no hold.)

At 1:43 p.m., Danny Grace from the Teamsters took the mic in a last-ditch effort to turn a tide that’s already gone out.

Kenney “snookered” the whole city, he said, reading from prepared remarks that echoed last week’s rally and the last-minute $700,000 ad push. He then asked them to delay the vote (to no avail other than receiving more loud cheers from loud anti-tax bros).

Closing it out was a woman who works at the Northeast Philly Coca-Cola plant who chided the “bait and switch” aspect of the process, and how people will drive out of town to buy soda (which is just silly rhetoric). 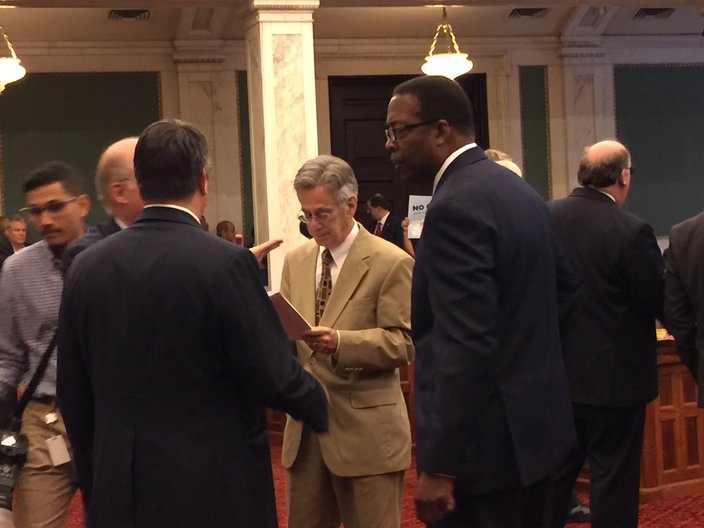 Before the last speaker, Clarke cited some bylaws or rules of order regarding the repetition of public comment. It was 35 minutes after public-comment session started.

By 2:15 p.m., some folks (both elected and not) struggled to not drift off to sleep and/or visit imagination land. The balcony crowd had cleared out to a certain extent.

At 2:30 p.m., Council passed a resolution chiding Republican Presidential Candidate Donald Trump for “racist, sexist, xenophobic and anti-American values” (after Republican Councilmen Brian O’Neill, David Oh and Al Taubenberger went on the record questioning why they’d entertain such a measure). It passed along partisan lines. (We should fully expect Trump to tweet mean things about Councilwoman Helen Gym by nightfall).

As the clock struck 2:53 p.m., the gallery woke from its anticipatory hush. Camera shutters sounded out. The council roll was read, with the three Republicans and Sanchez dissenting.

And just like that, it was over (but for likely legal challenges, of course!).

There was the press streaming downstairs to the second floor, where Mayor Jim Kenney had announced he’d field questions (and/or spike the football on the first landmark victory of his tenure).

It didn't even take 10 minutes for the Philadelphia Republican Party to send out an email blast titled, "Shame: Philadelphia becomes first major city to tax beverages." ("It's shameful how little the Democrats on Council listen to their constituents," wrote Philly GOP chair Joe DeFelice.)

What was once a full room was essentially empty, but Council had to finish up its agenda. Everybody was drained. It's been a long few months of bickering and horse-trading.

"Hallejuah," said Clarke when he learned they'd reached the last vote of the day and session at 3:19 p.m.

Barring any legal challenge, it will soon cost 1.5 cents more per ounce of soda (and other drinks!) in a city sorely lacking pre-K offerings for all.

I've made no bones about my position on it from the get-go, noting in print on Feb. 29 that I hoped Kenney outpointed his monied foes. (You can read that here.) But it's like a lobbying emailer pointed out early in the day: Don't gloat about this. So, I won't.

I'll do the opposite and let Sanchez, one-quarter of the opposing-vote bloc who was a Democratic Party outlier, have the last say when the meeting mercifully ended just before 3:30 p.m. (when Kenney was slated to start speaking).

She spoke about a need to pursue performance-based budgeting and take a good look at the $2.7 billion part of the city budget that goes toward "safety net" initiatives. By doing that, City Council could avoid getting entangled in these sorts of messy tax battles.

Asked if she was frustrated to be the lone Democrat voting against it, she said absolutely not. But something else stuck on her craw: "When we agree on what our priorities are, but then face all this discontent about how to fund it."