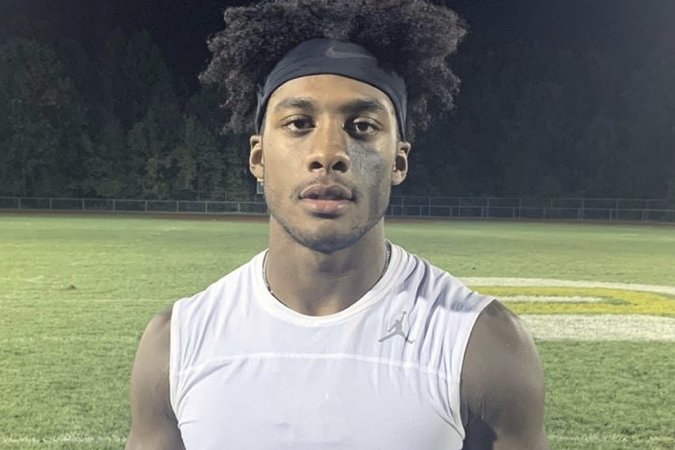 Moten, who’s headed to Michigan on a football scholarship where he is projected to be a defensive back, could go in the top-five rounds in the June 2020 Major League Baseball draft as a centerfielder for the Delran baseball team.

Thanks to Moten, the Bears are 4-1 this season, entering their game tonight at 0-5 Ewing.

“This is an important time for me,” said Moten, who carries a 3.8 GPA and has 25 tackles, two interceptions and a forced fumble. “I get to play one last time with the guys I played with my whole life, and I realize how important this time is. That’s very important to me. I also like the attention Delran is getting, and we have some phenomenal players on our team, like our running back, Eren Ibas.”

Moten’s high school stay will be very short. He’ll take a week off after the season and play in the All-American Bowl and will leave for Michigan in mid-May, for early admission.

“Basically, I had the option to graduate early in January, and my parents and I decided to play baseball this spring and play as many games as I can,” said Moten, who’s the son of Ron Moten, who played football at Florida and was a sixth-round draft pick of the Philadelphia Eagles in 1987. “I’ll fly back for three days for graduation, then fly back.

“(Michigan) Coach (Jim) Harbaugh have a special bound, because he says he’s going to allow me to play both football and baseball at Michigan. Coach Harbaugh encourages his players to play other sports.”

Delran coach Garrett Lucas said he’ll begin using Moten on offense in the coming weeks. Most opposing defenses are geared toward stopping Moten, which Lucas opted to get Moten out in space as a slot receiver. They know where he is, yelling “There’s No. 4, there’s No. 4.”

“RJ is a great kid and he knows this is the last of a lot of things for him, and his opportunities with his football brothers are dwindling,” Lucas said. “We have him down a little more in the box on defense, closer to the ball, which is where he’ll be playing a little bit at Michigan.

“He is a game-changer in both sports. There was one game I remember last year where the Virginia, Kent State and Kentucky coaches were here and they stuck around for his baseball coach. RJ struck out the first time. The second time he crushed the ball.

“The scary thing is RJ hasn’t fully devoted his attention to baseball. Once a college coach gets a hold of him, forget it. RJ can explode. RJ is a big kid who has quads like Saquon Barkley. He’s violent, aggressive runner who you can say he very much like a high school Bo Jackson.

“Bo Jackson was special and I have no problem saying RJ is very special.”

This will be Shawnee’s second big test in the last three weeks. The Renegades got by a very good St. Augustine team, 14-7, in overtime two weeks ago. The Shawnee defense will have its hands full trying to stop Wilson senior tailback Muheem McCargo, who rushed for 198 yards and scored three touchdowns in Wilson’s 53-34 victory last week.

The winner of this Inter-Academic League opener puts in a strong claim to be the Inter-Ac champion. Both are undefeated with good victories over solid programs.

“We knew we would have our hands full against Lansdale Catholic, and we knew Conwell-Egan was going to be a competitive game, and Upper Dublin is always good, but we had no idea how good we would be after five games,” Penn Charter Tom Coyle said. “I think we’re turning people over on defense, which has been a good thing for us.

“As a whole, the quarterback play is so important and we’re getting good play from Kyle Jones.”

The Quakers have scored 41, 44, 44, 56 and 34 in their five victories. Penn Charter has done it with the big play, while preventing the big play from happening.

“Episcopal is a good football team on both sides of the ball and they play with a little bit of emotion,” Coyle said. “They make plays inside the Red Zone. They’re very good and well coached.”