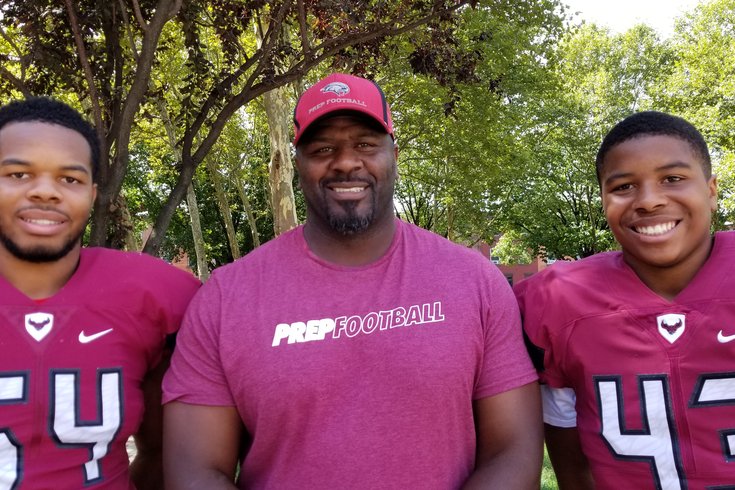 There is a difference between the two. The older one is more apt to enter a room, stand off on the side until his comfort level builds, then slowly integrate himself to his surroundings. The other, a few years younger, will just walk right in and announce his presence.

Josiah has started the last six games for the No. 1-rated Hawks at middle linebacker, while Jeremiah Jr. recovers from a broken right arm he injured in the Hawks’ Oct. 4 victory over Roman Catholic.

Josiah is 6-foot, and weighs 200—and he’s going to get bigger. He’s getting accustomed to the speed of the high varsity level.

“I thank God for giving me the opportunity and allowing me to do the things I need to do,” Josiah said. “It didn’t take too long to get used to the speed of the varsity level. I think the biggest adjustment to staying focused on what I see. I learned a lot from watching Jeremiah.

“Jeremiah’s been really supportive. As soon as I come off the field, he’ll be the first one to come over and give me advice. I was pretty young when my dad played, but as I got older, it’s when I started to realize who my dad was and what he did.”

Josiah is very much into football, watching the game and learning the history of the game.

“It’s going to require an intense, mistake-free effort Friday night. I learn something every time we play. I like my team. We’re getting back (6-foot-6, 195-pound senior tight end) Jackson Luneburg, who’s been out all year (due to an ankle injury). We’re excited about that. We’re playing for history and the kids know it.”

“I like watching the pros and learning from what they do,” said Josiah, 14, the youngest of Jeremiah Trotter’s three children. “Moving forward, I want to focus better on what I’m doing and helping the team. I’m getting more used to this, but I like it. I can’t wait to play with my brother, which happened for a short time when we played Roman.”

St. Joe’s Prep will play Nazareth tonight at 7 p.m. in the PIAA 6A quarterfinals at Bethlehem Area School District Stadium.

“It’s always been that way with the boys,” Jeremiah Trotter said. “Jeremiah would barely talk, and Josiah was always talking and get guys fired up and making the calls. Once he’s on the field, Josiah understands when it’s time to snap into that zone.

“Physically, Josiah is holding his own. I’m proud of him. He’s always been good with watching film and be a little more advanced than his brother, because Josiah watches football. Don’t get me wrong, Jeremiah watches film, and breaks things done. But Josiah will watch anything football related. He loves learning about the history of the game, and games, and players. Jeremiah could care less.

“It’s just different personalities. As long as you’re ready on game day, it doesn’t matter if you’re watching the game or not. When it’s game day, Josiah and Jeremiah are ready.”

Since Downingtown High School split into two separate schools in 2003, East and West, neither powerhouse program has ever won a PIAA District 1 6A (once 4A) championship in football. The last time Downingtown won the district championship was back in 1996, when Downingtown was one school, led by Virginia-bound Dan Ellis (now Great Valley’s head coach), who led the Whippets to the PIAA 4A state championship.

Friday at 7 p.m., at Downingtown’s Kottmeyer Stadium, the Whippets (12-1) will try and make more history by becoming the first Downingtown program, post-split, to capture a district crown when they take on two-time defending District 1 champion Coatesville (10-2), and Villanova-bound star quarterback Ricky Ortega.

Back on Oct. 4, it looked as if the only team that could challenge mighty St. Joe’s Prep was West, after the Whippets beat a very good East squad in a shootout, 63-35. But something happened since that night, the Whippets struggled two weeks later in a 29-21 loss to Coatesville at Downingtown.

“The point we preached to the kids that Coatesville wanted it more, and they came out here and punched us in the face. It took us 12 minutes to recover, we responded and we played well,” West coach Mike Milano said. “We learned the intensity that’s required. We had it in the Downingtown East game, that’s a huge rivalry game, and to be honest, we haven’t had the same juice since.