Playoff positives: Four reasons why the Union stand a chance in Toronto 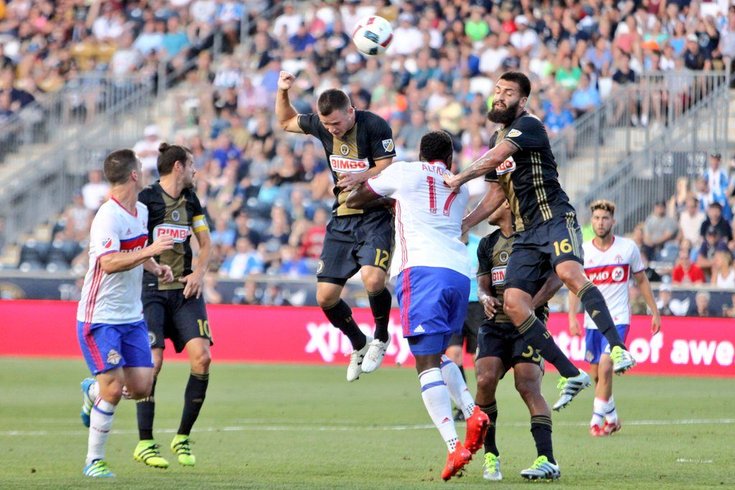 On Wednesday night, Toronto FC will host its first playoff game in 10 years of existence.

By now, we've talked at length about how bad the Philadelphia Union has been in September and October.

Amid the doom and gloom of a late-season collapse, here are four reasons why the Union might be able to pull off the improbable upset on Wednesday night in Toronto.

Toronto FC played one playoff game in its first nine seasons of existence. The team's first foray into the postseason was a 3-0 loss in Montreal last season in an Eastern Conference wild card game.

With the playoff curse finally broken, expectations were high entering 2016. This was a loaded squad featuring three highly-paid designated players, a handful of newly-signed veteran reinforcements, and a good corps of young players.

The addition of those veterans brings playoff experience to a club that otherwise lacks in that area, just like the Union.

Summarily, anything less than a playoff win for Toronto would be considered a failure, not just from a local perspective, but from a national perspective as well.

"I'd say the pressure is on them," Union manager Jim Curtin said on Monday. "They're the home team, they have great players, and their role players are very good, too. I don't think they get enough credit. They're a very good team. They played out of a 3-5-2 in the last game against Chicago and had success, so that's something we have to prepare for and be ready for. But I agree 100% that the pressure is on them.

"My guys should be loose. There's nothing to lose. We're going on the road on quick turnaround, short rest for both teams. We're doing the little things that are actually big things, in terms of getting there on a charter in the right way, to set ourselves up for the best positive way to get a result."

Johnson, Moor, Beitashour and Irwin have a combined 39 playoff appearances — more than TFC’s entire post-season lineup from a year ago.

Here's how Toronto finished down the stretch:

With six of eight games at BMO Field, they put together a record of two wins, two losses, and four draws. The two wins came against bottom-dwelling Chicago.

That four-game home stand was rather disappointing, with TFC only claiming three of 12 possible points. Greg Vanney's team was the favorite in each of those games.

However, they did play the bulk of that stretch without Sebastian Giovinco, and they have improved in these last two games. A 2-2 draw in Montreal is a decent result, and a 3-2 win at home to finish the year is a good momentum builder for the playoffs.

Still, TFC hasn't been firing on all cylinders down the stretch, and that's a positive for Philly.

Toronto's defense was the best in the league over the first two months of the season.

Because of renovations to BMO Field, TFC started with eight games on the road, but spectacularly conceded just seven goals in that stretch. That run included three shutout wins, two 1-0 losses, a 2-2 draw at New York City, and three one-goal losses.

There was another excellent patch of play from July 23rd to August 24th, a run of form that sent TFC to the top of the table.

Toronto went 6-0-1 in that stretch, scoring 18 goals and conceding just five. They thrashed D.C., Columbus, and New England by three goals each. They also put together a four-game winning streak at BMO Field.

From August 27th to the end of the season, the form dipped again, which is reasonable. It was always going to be impossible to sustain that level of play.

In that stretch of games I highlighted in the last section, Toronto conceded 12 goals in eight, for a goals against average of 1.5 per game. It's not bad, but they've been better this year.

Toronto has conceded six goals in their last three games going into this wild card matchup, and they look a bit vulnerable on the counter. They aren't conceding much from regular run of play scenarios. Either way, it's something that Philly should look to exploit.

Whereas Jim Curtin has stuck with the same formation for 34 straight games, Greg Vanney has continually tweaked things in Toronto.

Here's how they came out against Chicago in the season finale: 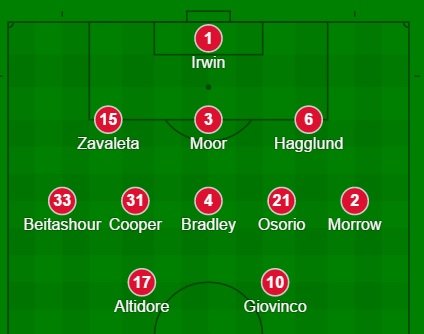 This was a 3-5-2 that basically used Steven Beitashour and Justin Morrow in wingback roles. There's a lot of firepower in this shape, but it's a tough formation to play effectively. Will Johnson, Marco Delgado, Benoit Cheyrou, and Tosaint Ricketts started on the bench.

For comparison, this was the shape they used on the road in Montreal: 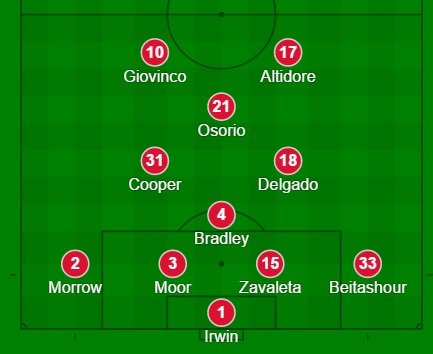 It's a narrow 4-4-2 diamond that still pairs Sebastian Giovinco with Jozy Altidore at the top of the formation. In this one, you drop a center back, pull your wing backs into traditional fullback roles, and keep a bit more of a defensive shape.

In the last game against Philly, Toronto used the 4-4-2 diamond with some changes in personnel. In the first game at Talen Energy Stadium, it was more of a flat 4-4-2 with Michael Bradley and Will Johnson playing in the central midfield.