The actress, who stars in 'iCarly' is an advocate for STEM education. She has partnered with USAA to promote Fort Innovate, which comes to Philly on Aug. 3-4 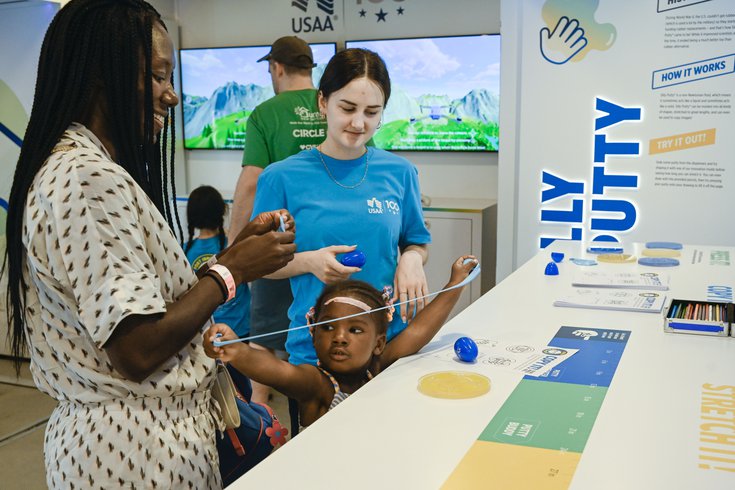 "Fort Innovate," a free family-friendly innovation lab, will be at the Please Touch Museum on Wednesday, August 3 and Thursday, August 4. Actress, singer and STEM advocate Miranda Cosgrove has partnered with USAA to spread the word of this traveling exhibit.

A free children's innovation lab is traveling to Philadelphia next week, and actress, singer and STEM advocate Miranda Cosgrove has partnered with USAA to spread the word.

Fort Innovate will be at the Please Touch Museum on Wednesday, Aug. 3 and Thursday, Aug. 4. In honor of its 100th anniversary, USAA is bringing the exhibit to science museums across the country to inspire children to become the next generation of big thinkers.

Philly is the last stop on the Fort Innovate tour, which has traveled to Arizona, Texas, Florida, North Carolina, Missouri, Illinois and New York throughout the summer.

Cosgrove, who rose to prominence through starring roles in the movie "School of Rock" and TV shows "Drake and Josh" and "iCarly," partnered with USAA on the exhibit due to her own personal connection to the military, as well as her love for science.

"My grandfather was a vet," Cosgrove said. "Also, when I was young and was filming iCarly, we did an episode of iCarly with Michelle Obama, and after that episode came out I got to go on a little tour to a bunch of different military bases with Michelle Obama. That was just a really awesome experience that I'll never forget, so I was really excited to be a part of this."

USAA, which was founded in 1922 by a group of soldiers who were deemed too high risk to obtain car insurance, is among the leading providers of insurance, banking, investment and retirement solutions to more than 13 million members of the U.S. military and veterans.

During the exhibit's two-day stay in Philly, visitors can learn about military innovations that have impacted society, such as silly putty, night vision, virtual reality, walkie talkies and drones.

"One of the most fun ones is the virtual reality, or the night vision," Cosgrove said. "When I was younger I really wanted night vision goggles, and I remember I got some and I just had a really good time with that. So, I hope it makes good memories for kids, and you never know, maybe it'll leave such an impression that they'll end up going into science."

Cosgrove first became interested in science when she was young and enjoyed working on science projects. She took a break from acting to attend USC, where she majored in Psychology, which she notes is STEM adjacent.

"I feel like there's an interest for everybody within STEM once you realize how many different jobs you can have," Cosgrove said.

What's next for Cosgrove? Along with hosting "Mission Unstoppable," a CBS show on which she showcases the inspiring stories of women changing the world through STEM, the iCarly reboot has recently been renewed for a third season on Paramount+.

"I'm really excited to get back with everybody and see what stories the writers come up with," Cosgrove said.

The Fort Innovate exhibit is free, with reservations to Please Touch Museum required in advance.

"For me, I think one of the coolest things about it is it's totally free and it's just meant to be fun and inspire kids to get into STEM, and have a fun hands-on experience and get to see all the different exhibits," Cosgrove said.