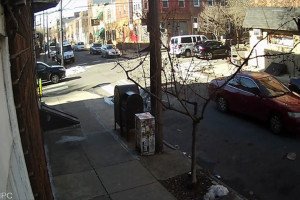 The Philadelphia Police have released this image that, law enforcement officials said, shows the red Honda believed to have been involved in a hit and run that occurred in Point Breeze on Feb. 2, that injured a mother and her two young daughters.

Philadelphia police on Wednesday released an image of a car believed to have struck and injured three people – a mother and her two young children – in Point Breeze.

A red Honda was captured about 12:51 p.m. on Tuesday at Broad and Dickinson streets, where a 30-year-old woman and her two children – a five-year-old girl and a five-month-old girl – were struck in a hit-and-run, police said.

The vehicle, believed to be driven by a woman, had a sun roof, is missing the passenger side mirror frame and may also have damage to the hood, police said.

Anyone with information about the car or the identity of the driver should contact the the Accident Investigation District at 215-685-3180/81 or call 911.