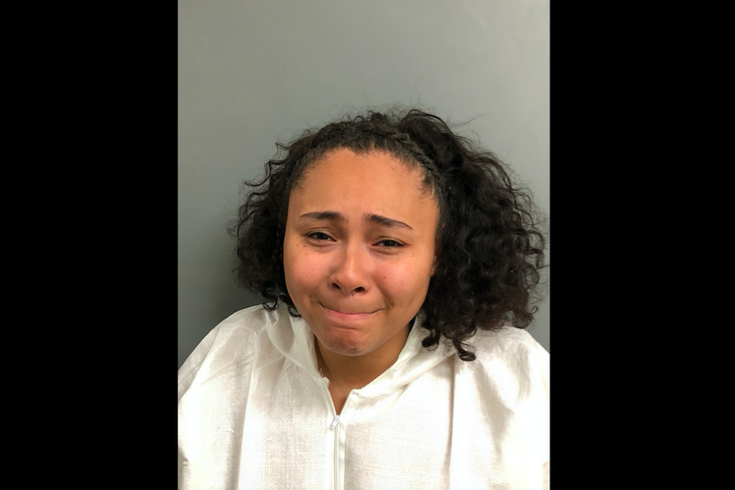 Caitlin Maurus, 21, allegedly stabbed 25-year-old Jaylin Matthew Thomas during a domestic dispute at their shared apartment in Pottstown on April 16, 2020.

The incident occurred around 10 p.m. at 351 N. Charlotte St., and Pottstown police responded to the scene. Inside the property, investigators found 21-year-old Caitlin Mauras and 24-year-old victim Jaylin Matthew Thomas, who had a stab wound to the upper torso.

Thomas was pronounced dead at the scene, police said.

Pottstown police and Montgomery County Detectives determined the alleged stabbing resulted from a disagreement between the couple earlier in the evening.

When authorities first arrived at the apartment, Mauras told investigators, "I thought it was the spatula," according to a criminal complaint.

A witness in another apartment told investigators they called 911 after hearing Mauras' scream in the hallway. When the witness encountered Mauras, she allegedly said, "I didn't mean to do it. I was just trying to scare him."

Detectives said that while being questioned Friday, Mauras told police she and Thomas had argued earlier in the evening about the television show "Family Guy." Mauras also said she looked at Thomas' phone and saw he had been viewing the Twitter account of his ex-girlfriend, according to prosecutors.

Mauras claimed Thomas had pushed her against the wall of the apartment in an attempt to get her cell phone, police said. When the two fell to the ground, Thomas remained in the living room and Mauras went to the kitchen, where she grabbed what she thought was a spatula from the dish rack.

When Mauras returned to the living room, she allegedly raised her hand and took a "whack" at Thomas, who began to bleed and held his neck, according to the criminal complaint. Thomas remained silent and fell to the floor.

Mauras further told investigators Thomas had not threatened her prior to the stabbing and he was unarmed. Detectives observed a minor lip injury on Mauras, officials said.

An autopsy showed Thomas died of a stab wound to the neck and his death has been ruled a homicide.

Mauras is charged with first-degree murder and related offenses. She remains held at the Montgomery County Correctional Facility ahead of a preliminary hearing on April 27.

The incident is the second deadly instance of domestic violence in Pottstown this month. Last week, prosecutors charged 69-year-old Michael Hatfield with allegedly strangling and killing his wife.

On Thursday, Montgomery County detectives published an analysis that showed the number of 911 calls and police reports for domestic violence have increased by nearly 9% since restrictions were put in place to prevent the spread of the coronavirus.

"This is the second tragic domestic violence death in a week in Pottstown. Both murders occurred after arguments by two people who lived together," Montgomery County District Attorney Kevin Steele said. "Staying at home together, as we all are now doing, comes with stresses that may trigger domestic violence. People living in these situations, male or female, need to know that there is help available. Call the hotlines. Talk to someone about getting help."

Residents who are in danger are urged to call Laurel House's 24/7 domestic violence hotline is (800) 642-3150. The Women's Center of Montgomery County's hotline is (800) 773-2424. Both of these help lines are answered by trained volunteers who can listen, offer advice on services available, provide safety planning and get immediate safe shelter for victims and children.