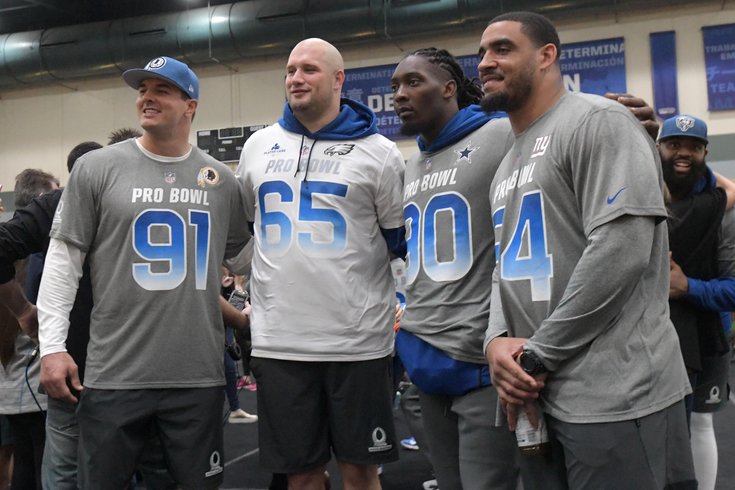 A group of very good NFC East pass rushers hanging out with a rare player who has shut them down.

In case you missed the offense edition, it was dominated by Eagles players. Here we'll cover the defensive side of the ball. Oh, and since the two good teams in the division run 4-3 defenses, we'll (sort of) use that format.

DeMarcus Lawrence is a no-brainer, as he is the most talented defensive end in the division, while Kerrigan is the most consistently productive. Without looking, name as many players as you can who have at least 60 sacks over the last five seasons. OK, now go look.

Fletcher Cox is by far and away the best interior defensive lineman in the division. At No. 2, I'd go with Jonathan Allen, who racked up 61 tackles (11 for loss), eight sacks, and 15 QB hits. He's primed to take off in his third season in the NFL.

The Cowboys clearly have the two best off-ball linebackers in the division in Leighton Vander Esch and Jaylon Smith, who can both make plays from sideline to sideline, and are the strength of their defense. As for the third linebacker here, I think Zach Brown could be better than Nigel Bradham.

Yeah, I already know what you're going to say. Josh Norman is wildly overpaid and overrated. And yes, I agree. But, uh, who else really deserves to be here instead?

Jenkins is just a great football player, as he can play safety, linebacker, slot corner, and outside corner. I considered Jabrill Peppers for the other spot, but two interceptions, no forced fumbles, and only eight pass breakups in two full seasons quickly ended that possibility.