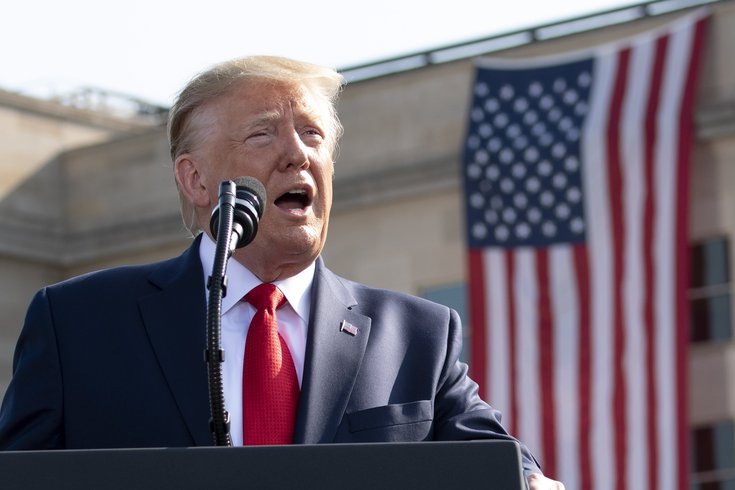 Trump will appear as part of a town hall hosted by ABC News at the National Constitution Center. Road closures will be expected between 4th and 9th streets and Market and Vine streets.

Motorists should expect traffic delays in parts of Philadelphia on Tuesday as a result of President Donald Trump's visit to the National Constitution Center.

The president in coming to Philly to participate in a town hall hosted by ABC News. The event will allow in-person and virtual attendees to ask the president questions on a variety of issues, including the coronavirus pandemic and racial injustice. George Stephanopoulos will host forum that will be broadcast at 9 p.m. on ABC.

For security purpose, road closures will begin between 1 p.m. and 2 p.m. around the National Constitution Center, 525 Arch Street. Roads between  Market and Vine streets and Fourth and Ninth streets will be closed to vehicles and will remain closed until after the event ends. Pedestrians also will have limited access in that area.

Commuters should expect delays on I-95 and I-676 between Philadelphia International Airport and Center City this evening. The highways will be cleared for Trump's motorcade between 4:30 p.m. and 7 p.m.

SEPTA's Market-Frankford line will bypass the Fifth Street Station from 3 p.m. until Wednesday morning, the transit authority said. Passengers can still board at the Second and Eighth street stations. And SEPTA Bus routes 17, 33, 38, 44, 47, and 61 will be detoured in Old City during this time.

The town hall can be streamed on ABC News Live, a digital service available at ABCNews.com, and various streaming platforms, including Hulu, YouTube TV and Apple TV.