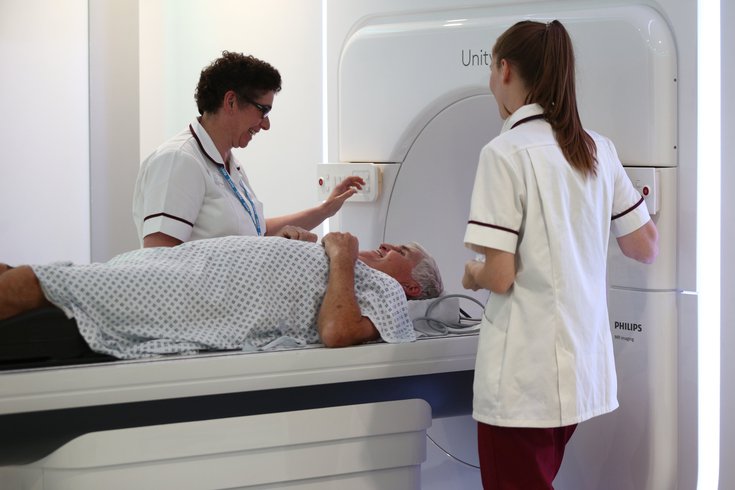 Radiation is frequently used as a bridging care in patients with multiple myeloma to relieve bone pain. Above, radiographers use a Magnetic Resonance Linear Accelerator machine to treat a prostrate cancer patient.

Multiple myeloma patients can safely receive radiation therapy while they wait for an infusion of CAR-T cells – a cancer treatment that trains a patient's immune cells to track down and kill cancerous cells.

A new University of Pennsylvania study found that receiving radiation within 35 days of CAR-T cell therapy did not increase the likelihood of two common side effects of cellular therapy or reduce overall chances of survival.

The study builds on similar research that found radiation didn't effect the effectiveness of CAR-T cell therapy in patients with non-Hodgkin lymphoma, another type of cancer. That research was conducted by Penn Medicine last year.

Multiple myeloma is a cancer of the plasma cells found in bone marrow. Plasma cells are an important part of the body's immune system defense, responsible for producing the antibodies needed to launch a strong attack against infection.

However, the plasma cells of patients with multiple myeloma produce an abnormal protein that weakens the immune system, leading to increased infections, and bone and calcium problems.

Radiation therapy is frequently used to help relieve bone pain in these patients, but the way it may affect CAR-T therapy isn't totally understood.

CAR-T, an investigational cancer treatment discovered by Penn Medicine, collects and reprograms a patient's immune cells before infusing them back in the patient. In the case of multiple myeloma patients, the cells infused are B cell maturation antigen, known simply as BCMA cells.

Cytokine release syndrome is an inflammatory response that causes flu-like symptoms and high fevers, nausea and muscle pain. It often requires a patient be admitted into intensive care.

The radiation didn't appear to reduce overall survival of the patients, either.

The findings will be presented Tuesday at the virtual American Society for Radiation Oncology Annual Meeting.