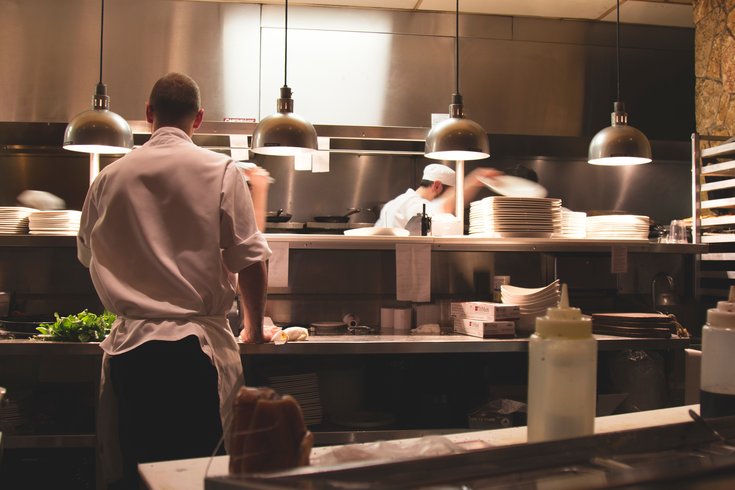 The show starts with Jersey chef David Viana reading a note left for the group at their "clean-butted" mansion. Apparently, someone thought it would be *fun* for all of them to plant their own garden – can't wait to see what this challenge is in a few weeks.

"I'm afraid I will literally kill everything," said Viana. But, uh, the best tomatoes I ever had were from the Garden State?

Gail Simmons shows up on the chefs' TV to explain (and show) how she's very pregnant, so that's why she can't be there this season. Apparently she's craving spicy foods, so for the Quickfire Challenge the chefs have 30 minutes to create something she (and baby) will love.

At this point in the show I haven't seen my Philly favs yet and I'm getting worried, but then a quick cut to Natalie Maronski and Eddie Konrad and everything's alright.

For the challenge, Jersey and another chef tie, so both dishes get boxed and sent to Simmons. Before the show ends, she'll taste both and choose one winner to receive immunity in the Elimination Challenge.

As chef Sara Bradley, Kentucky native, says. "It's great for brushing your teeth." So, skip the minty toothpaste already and use a bottle of the hard stuff.

On the way to the Maker's Mark distillery, the place where "every drop of Maker's Mark has been produced," Philly's Konrad shares some insight into his life under Nick Elmi's shadow.

"I guess I came on 'Top Chef' to find some confidence. I've already got into my head like, 'What the f*** are you doing?' I've seen 'Top Chef' change Nick Elmi's career. He went from not really being the biggest name in Philadelphia to having a really serious following."

"I'm definitely hoping that 'Top Chef' can help me open my own restaurant," he finished.

At the distillery, the chefs eat a Kentucky feast, including something called "burgoo," a spicy stew that I need now.

After the fun, it's time for the games. Host Padma Lakshmi tells the group they will have to make their own mark on Kentucky cuisine. Everyone draws a knife from a fancy box and are divided into two teams.

On the black team are our Philly favs, Maronski and Konrad. On red is our other local chef, Viana.

This is when things get complicated. After choosing who will reimagine which Kentucky dish, it's time to shop at Whole Foods.

Both teams are using lamb and Konrad gets to the counter second. His first pick is gone, so he chooses racks of lamb. Both teams are on a budget though and Konrad accidentally (?) spends $500 on lamb, leaving his teammates to struggle. Spices, fruits and more have to be put back on the shelf – including a bag of lemons for Maronski's dessert.

For the Elimination Challenge, the teams serve the judges family-style platters. Konrad's lamb appears to be a hit, and so does Viana's plate, but Maronski comes up short.

At the judging, Viana wins immunity, Nini Nguyen on the red team wins the Elimination Challenge and Maronski is sent to Cutthroat Kitchen.

It's time to pray to Gritty that she makes it through and gets a spot on the show again.