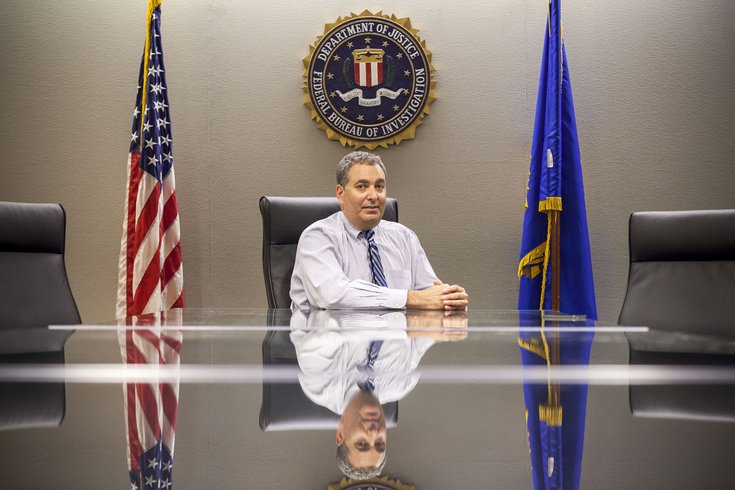 Klaver spent the last seven years serving as the public information officer for the bureau's Philadelphia office. He was, in effect, the public face of the local FBI.

As he gets ready to move into the private sector, he opened up to PhillyVoice last week about his career, which included serving the bureau eight years in Indiana before coming to Philadelphia in 1998. He spoke of the challenges facing the FBI, impactful cases and how he's managed to handle the media. Here are excerpts from our interview:

PhillyVoice: What got you interested in working for the FBI?

I worked for the city of New Orleans briefly as an EMT and as a police officer. Just the few agents I had met in that capacity — I thought this was something I wanted to do.

PV: You’ve worked for the FBI for nearly 26 years. What’s the biggest lesson you’ve gained over that time?

JJK: I don’t know that there’s one thing. … When I was in Northwest Indiana, I worked pretty much everything – all the types of cases – because I was in a small office covering a territory of seven counties. I worked a lot of bank robberies, a lot of civil rights.

Working civil rights really opened my eyes to the level of hatred that can happen. It’s hard not to work those kinds of cases and be affected by them. I worked a plane crash out there. You just see things. We tend to maybe compartmentalize our experiences so it doesn’t affect you personally. You don’t want to take the job home.

Obviously, 9-11 changed a lot. I was here then. Like a lot of agents in the northeast area, I was deployed up to New York. Now, I’m from New York and I remember, as a kid, it was a big deal when the World Trade Center buildings opened. That was a big moment for New York. Having grown up there, it really meant something to go up there and in a very, very small way, at least try to help.

PV: Has there ever been a case that you’ve worked on that has particularly rattled you?

JJK: No. (In Indiana), we had a murder case on the Dunes National Lakeshore — a young couple who was on the dunes at night. It’s a lakefront area beach and they were murdered. They were both shot point-blank, execution style. I was a young agent at the time. I feel good that I had a part in solving it and arresting the guy who was responsible for it, but those types of cases, they kind of stick with you.

The plane crash, I don’t think I’ll ever forget those images and the experience I had. It was a commuter flight with 68 people on board that crashed in a cornfield in Indiana. Those types of things, they kind of stay with you. You try to put them away, but I think they kind of inform a bit how you view the world.

PV: Is there a particular case that you’re most proud of being a part of or was memorable for you?

JJK: There’s probably a couple that might be memorable, but not for good reasons. The civil rights cases I worked in Indiana, some of the hate crime cases. Even back then I didn’t think that people were still burning crosses in this country, but they were. You see the effect that that has on the victim. Just the terror that people must live under, the fear for their own safety and their family’s safety, to be targeted because of your race for living in a certain area.

I started a program out in Indiana. We had a civil rights working group because there was some real issues in that part of Indiana. I just think it was good to be able to do something positive in that arena, help educate the public, help educate people to at least what’s out there. I think a lot of people don’t realize what kind of hate can be out there.

PV: Is there any case that stands out as being really bizarre, that was unusual even for law enforcement?

JJK: I don’t know that I saw anything that I would categorize as really bizarre. It always amazes me that you see people involved in criminal activity and you think, These are smart people. Especially when you’re talking about white collar crime and public corruption, these people are people who can make money legitimately if they wanted to.

Yet, they’re resorting to this — doctors and lawyers and people who are involved in schemes to defraud insurance companies and other corporate victims. They probably make enough money legitimately, but yet they’re committing these sometimes brazen frauds. I wonder how they think they’re not going to get caught.

PV: As the public information officer since 2008, what added responsibilities come with being a public face for the FBI?

JJK: It’s just being available and knowing what the FBI does. That’s why most of the people who handle media for the FBI are experienced, older seasoned agents who have a broad background. We know what it is that the bureau does and how to tell that story.

That can be a challenge for us because there is a lot we can’t talk about because of prosecution restrictions, because of privacy concerns. We don’t want to identify subjects of investigations who haven’t been charged with a crime, because it’s not fair to people to have information out that they were alleged to be involved with a crime without being charged or convicted.

PV: Was there ever a time where you knew you couldn’t provide more information but would have liked to have said more?

JJK: Oh yeah. All the time. As a law enforcement officer, we are seeing things in the investigations before the public is, but there’s a judicial process. There’s due process. There are times where it would be nice to be able to convict people faster, but that’s not how the system works, particularly when you’re talking about some of the worst cases – child pornography and child sexploitation.

PV: Is there a case that you can cite that has since reached a conviction or conclusion that you would have loved to have pushed out information earlier?

JJK: There was the Bonnie Sweeten case. She faked her own abduction and her daughter’s abduction. She’s since been convicted of various things involving theft of funds. Cases like that, we did a lot of media on that when the ‘quote’ abduction happened. We knew fairly early on that the story didn’t really make sense, that the abduction didn’t really happen the way it was initially alleged.

We couldn’t say that. We still hadn’t found them. You still have a nine-year-old girl. We were looking for a parent and that parent’s child — and the safety of the child was really paramount in everybody’s mind. We were working with a whole host of other local agencies. We just had to be real careful with what we said.

There have been other things more recently – the Shane Montgomery case – that we were working with Philly PD on. You work those types of cases and you want to get information out to the public, especially when you think it’s going to be helpful to the investigation. Sometimes, we know before the information is made public where things are going and it’s just difficult. You’re trying to resolve this thing. Everyone is hopeful that it’s going to have a good resolution. When it doesn’t, it’s tough, but there comes a time when either us or local police are going to make the announcement that no one wants to hear.

PV: Aside from being restricted from what you can and cannot say, what are some of the biggest challenges in dealing with media? Feel free to be critical.

JJK: It’s been a very positive experience. I do training for local law enforcement in dealing with the media. My take on it is we have a job to do and reporters have a job to do. Those two jobs sometimes are more aligned than others. Sometimes they’re in direct opposition.

The media wants all the information as quickly as possible. We have a criminal investigation that might be ongoing, that’s pending prosecution or someone hasn’t been charged yet. We really have to protect the integrity of that investigation. The media wants all the information now. Sometimes, pushy is not the right word. But they’re pushing to do their job.

I tell cops, when we do training, that ignoring them is not going to make them go away. They have a job to do and you have to respect that. There are things that you can explain, often off the record, where you’re not being directly quoted as to why there’s no information available right now or why information can’t be provided.

PV: Over the course of your career, what are some of the biggest changes you’ve seen in federal law enforcement?

JJK: I think the level of cooperation, the level of information sharing (among law enforcement agencies) has really changed. For the FBI, we’ve always been a law enforcement and an intelligence agency. I think, when I came in, those functions were very disparate. They did not necessary integrate well. Really, post-9-11, there’s been great effort in the FBI to really integrate intelligence in to everything we do.

It makes us more efficient and more effective. … We have limited resources. Where are the crime problems? Where do we need to be devoting our resources? The intelligence collection and analysis function really helps focus those resources and helps identify where the problems are. It helps makes the cases. So that’s been a big change.

Now, obviously, the cyber component is changing. We didn’t have computers when I came in. We didn’t really have them in the office. The public didn’t have access to computers like we do today. Just the digital revolution – the explosion of the Internet and digital information has changed a lot of what we do. There used to be cybercrimes and other crimes. Now, there’s cyber components to almost everything.

PV: What do you see as the biggest challenge facing the FBI?

One of the things that our director has talked about is the threat that we face in this country from what we refer to ‘going dark.’ That is our inability to conduct lawful searches and lawful intercepts of digital communications.

Your iPhone is encrypted end to end. If that iPhone has encrypted communications and we don’t have access to them because the service provider, even if we give them a court order, they can’t unencrypt the data stream. We can’t capture that information that we have a legal right to get. That ‘going dark’ issue, I think, is a major threat to national security.