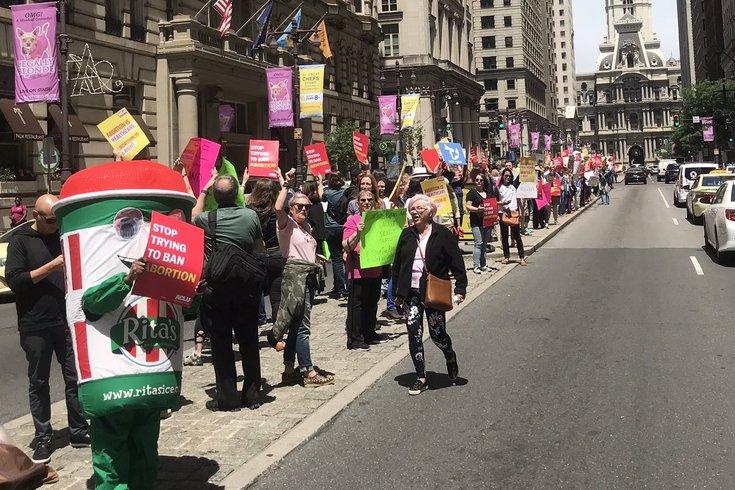 An abortion rights rally in Center City on Tuesday yielded a particularly memorable viral photo: a person, dressed as a heaping cup of red water ice, holding a sign that read “Stop trying to ban abortion."

MORE: Photos of hundreds rallying on Broad Street in support of women's rights

Philly-area quiz host Johnny Goodtimes snapped this flawless photo of the scene of Broad Street median, south of City Hall, with Billy Penn in the background and a conspicuous summertime treat in the foreground:

Only in #Philadelphia will you find a water ice mascot protesting for abortion rights. pic.twitter.com/9d1rFcHR3e

Really, if you had to pick a photo encapsulating the ethos of Philadelphia, this one has to be way up there.

Goodtimes told PhillyVoice he didn’t want to get anyone in trouble, in case an actual Rita’s employee was in the "Ice Guy" costume, but “it was just such a great Philly shot I couldn’t keep it to myself.”

When reached for comment, a spokesperson for Rita’s told PhillyVoice on Tuesday afternoon that the mascot's appearance "was absolutely not sanctioned by Rita’s Italian Ice."

Abortion has been shifted to center stage in the national conversation after the Alabama Senate approved a measure last week outlawing almost all abortions in the state.

Pennsylvania Gov. Tom Wolf said last week that he would veto any comparable bill in Pennsylvania.