As RSV cases in the U.S. surge, scientists get closer to a new vaccine 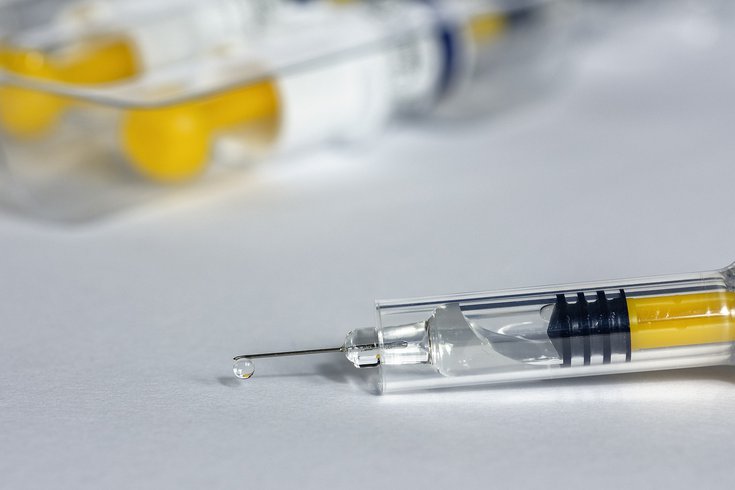 The first RSV vaccine candidates expected to be reviewed by the FDA are for seniors and pregnant women which will also protect infants in their few months of life. Vaccines for children are a little further behind in testing, the experts say.

Across the country and in the Philadelphia region, hospitals are being inundated by children suffering from respiratory illnesses, especially respiratory syncytial virus. There is currently no vaccine for RSV, but several potential candidates are in late stage trials, scientists say.

RSV generally causes cold-like symptoms, but it can lead to more serious illnesses, including bronchiolitis or pneumonia, among children under 12 months of age and seniors. Doctors are saying that this is the worst RSV season that they have seen in a while.

Both the Children's Hospital of Philadelphia and St. Christopher's Hospital in Philadelphia have reported a large number of cases of RSV coming into their emergency departments.

Dr. Ron Keren, chief medical officer for the Children's Hospital of Philadelphia, told reporters at a recent media briefing that RSV arrived this year in April, which is unusually early. The number of cases in September and October have been high, he continued, with many more infants with severe infections.

There is some good news on the horizon, though. Several new RSV vaccines are almost ready to be reviewed by the U.S. Food and Drug Administration, and there are many more in different phases of testing.

The White House COVID-19 Response Task Force's Dr. Ashish Jha told CNN that he's "hopeful" there will be an RSV vaccine by next fall.

There is also a long-acting injection developed by AstraZeneca in clinical trial that can protect infants from the virus for the first six months of life. Data from the trial shows that the antibody shot is 75% effective at reducing the risk of severe infection.

If a vaccine or the antibody shot is ready by next RSV season, it will be the first new therapy for RSV in more than 20 years. The last one approved was a monoclonal antibody, Synagis, which was approved in 1998 as a monthly shot during RSV season for premies and other high-risk babies.

RSV vaccine development has stalled since the 1960s, when two children died in a clinical trial.

That RSV vaccine was made with an RSV virus, chemically altered so it was inert, and a chemical compound called alum, which was meant to boost the immune system so it would respond better. At first, the children in the trial, conducted between 1966 and 1968, responded well to the vaccine, but when RSV season started, about 80% of the children who were vaccinated ended up with more severe infections that required hospitalization. Two of them died.

The tragic results of the trial led to a halt in the development of all RSV vaccines, and more safety measures being put into place in clinical trials. This included the creation of the Vaccine Adverse Events Reporting System, which allows sites to receive quick notifications when an adverse event is reported at another clinical trial site.

Scientists also learned that the process used to deactivate the virus in the failed vaccine flattened out its proteins, which meant that the antibodies the children's immune systems made in response to the virus essentially made the children sicker, instead of fighting off the virus. This phenomenon is referred to as antibody-dependent enhancement of disease.

Vaccines now in the pipeline

The RSV vaccines in development are using different processes to trigger an antibody response. One of them is a technique discovered about 10 years ago by National Institutes of Health researchers. They found that they could isolate and freeze the virus's F-protein so it doesn't keep changing shape. This allows the immune system to develop stronger antibodies against it.

The first RSV vaccine candidates expected for FDA review are seniors and pregnant women; vaccinating the latter group also will help protect infants in their first months of life. Vaccines for children are a little further behind in testing, experts say.

"We don't have an Operation Warp Speed for RSV," Dr. Céline Gounder, a senior fellow at KFF and infectious disease specialist, told NBC News. "Phase 3 clinical trials take time, lots of patients and money. You can speed up the clock with money."

The companies that have RSV vaccines for adults in late stage clinical trials are Pfizer, GlaxoSmithKline, Janssen, Moderna and Bavarian Nordic. The Pfizer and GlaxoSmithKLine vaccines are being tested for pregnant women and seniors. The Janssen, Moderna and Bavarian Nordic vaccines were designed just for seniors. Data reported from the companies so far show promising results.

Preliminary data on the GlaxoSmithKline vaccine for adults ages 60 and older shows that the vaccine is 83% effective in preventing disease, and 94% protective against severe disease in adults 70 and older.

Data from Pfizer's clinical trial on an RSV vaccine for pregnant women was published in the New England Journal of Medicine this year. It showed that the vaccinated mothers made antibodies that could be detected in the umbilical cord blood just after the birth of their babies.