Ruben Amaro Jr. will be back on ABC’s ‘The Goldbergs’ on Halloween

The former Phillies GM will portray his father once again 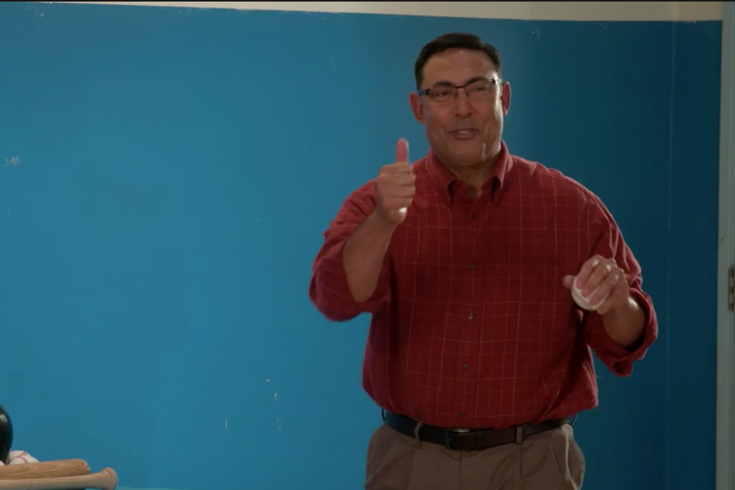 Ruben Amaro Jr., playing his father in an upcoming episode of "The Goldbergs."

Former Phillies general manager (and current Mets first base coach) Ruben Amaro Jr. will make another cameo appearance in ABC’s ode to Philadelphia, “The Goldbergs,” in an upcoming episode.

Adam Goldberg, the show’s creator, went to William Penn Charter High School with Amaro Jr. in the 1980s, and he’s put that connection to use in past episodes.

At first, Amaro Jr.was just portrayed by another actor. But Amaro Jr. reached out to Goldberg and said he enjoyed the show, so in January, Goldberg invited him to play his father, Ruben Amaro Sr., also a former Phillies player.

Here’s former Phillies GM Ruben Amaro Jr. (playing his father, Ruben Amaro Sr., on tonight’s episode of The Goldbergs) being told to sit down and shut up. pic.twitter.com/gvNjtbSduq

(Yes, it does get a little confusing with the Jr. and the Sr., but that’s part of the charm!)

Amaro Jr. was a hit, both with fans and with the folks in charge of the show.

“(Amaro Jr.) did such a fantastic job,” Goldberg said in a release, “we had to have him back.”

This time around, Amaro Jr. once again portrays his father in a quick cameo scene. He and actor Nick Guardad, who plays Amaro Jr. in the show, share an over-the-top moment of father-and-son love.

Amaro Sr. passed away in March 2017 after a battle with prostate cancer, and Amaro Jr. said he appreciates the opportunity to portray his father.

“My father was everything for me – a father, a role model, a hero, and my best friend,” Amaro Jr. said in a release. “I’m grateful to 'The Goldbergs' for being able to pay tribute to my dad in this special way.”

This is, of course, just the latest in a long line of shoutouts to southeastern Pennsylvania from the show, from Hersheypark, to Merrill Reese, and even a throwback South Street reference.