While other aging vets play in All-Star Game, Phillies' Howard can only watch

And the fans are left with nothing but fading memories 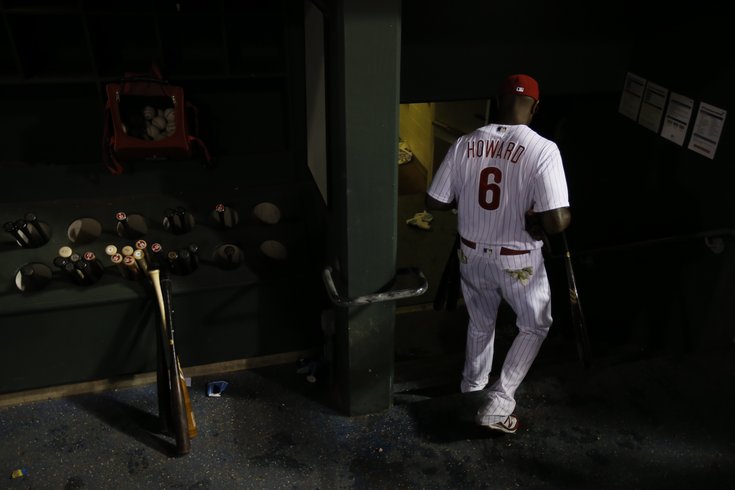 Phillies first baseman Ryan Howard heads to the clubhouse after a game.

For fans of the Philadelphia Phillies, the missing piece from the Major League Baseball All-Star Game has been The Big Piece – Ryan Howard.

This year's rosters include a couple of long-time veterans in both leagues: Bartolo Colon, the 43-year old New York Mets pitcher who, by the way, will be pitching on Saturday night at Citizens Bank Park against the Phillies, and David Ortiz of the Boston Red Sox.

Ortiz, 40, is on the second half of his final march through baseball. He still has plenty of power, and there are more than a few fans who wish that Ortiz would reconsider and provide at least another year of the show.

Meanwhile, in Philadelphia, Phillies fans can’t wait for Howard to end his career and exit Philadelphia.

Make no mistake, of all players on any roster in all of baseball, no player had less of a chance to get invited to the All-Star Game than Howard. He has arrived at this All-Star break as advertised – a long ago great player who has lost his abilities.

This entire season has been an exercise in hiding Howard, and finding a way to promote Tommy Joseph to take over his position at first base. It has been a sad tale that included Howard having to deal with a dopey fan tossing a plastic beer bottle his way after a game-ending strikeout.

But it wasn’t all that long ago that Howard was noted for game-ending home runs. It was a time when you would look ahead an inning or two, and glue yourself to the TV for a Howard plate appearance.

It was a time of Jimmy Rollins and Chase Utley; a time of Roy Halladay and Cliff Lee; and, yes a time of Cole Hamels, who earned a spot on Tuesday night’s All Star roster.

One day before, Hamels gave what amounted to an ode to Philadelphia when he announced that he missed his days in Phillies pinstripes. More than anything, he missed the wild crowds at Citizen’s Bank Park, the streak of sellouts, and the feeling of walking on to the mound in Philly to start a postseason game.

Well, even if Hamels hadn't been traded, those days would still be gone. Even with a season that has gone far better than expected, the ballpark is never packed and the Phils are in what you hope to be the early stages of rebirth.

Much of the reason for the new hope can be found in the players former general manager Ruben Amaro and the club’s front office acquired when they dealt Hamels to Texas -- a half dozen prospects, including highly-regarded catcher Jorge Alfaro and outfielder Nick Williams, along with Alec Asher, Jared Eickhoff and veteran Matt Harrison.

That is what's so sad about an All-Star Game featuring players such as Colon and Ortiz.

It would have been fitting for Howard to have made his exit from the Phillies with a confetti-filled final season. It would have been great if he had aged like Colon or Ortiz, and had a summer of standing ovations.

Instead, the final scene we will remember is Howard busting out of the batter’s box in October of 2011. It was the final out of the National League Division Series, and Howard was writhing on the baseline between home plate and first base.

It was not only the end of the game and the series, it was the end of an era. And the end of Howard as a force.

If you really want to drive yourself into a baseball depression, think of how different things could have been if there was no torn Achilles that night.

But the reality is that Howard’s future was also torn. There was no full recovery in terms of his power, and we are left with the sad scenes of the end of his career.

Unlike Colon and Ortiz, there will be no late-career applause for Howard, a Philadelphia icon who we all wish could've gone out a lot better.