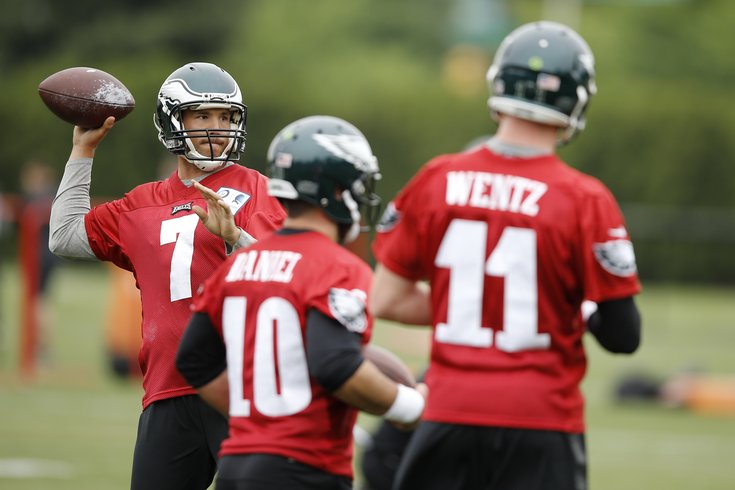 From left to right: Sam Bradford, Chase Daniel and Carson Wentz. Is that how the Week 1 depth chart will read?

Breaking: The Eagles have three quarterbacks that they are paying handsomely. One of them is Sam Bradford, who signed a lucrative two-year deal in March, and then subsequently left the team for a short period after the Eagles traded up to the No. 2 overall pick to draft a quarterback. Chase Daniel was signed during free agency, also in March, to a pricey deal for a backup. And finally, the Eagles gave up a bounty of draft picks to select Carson Wentz second overall in the 2016 NFL Draft.

There. You're caught up once again.

Prior to the draft, former Raiders and Buccaneers head coach -- and current ESPN TV analyst -- Jon Gruden noted that Eagles head coach Doug Pederson is going to find it challenging getting each of his three quarterbacks a sufficient number of reps in practice, via Zach Berman of the Philadelphia Inquirer:

"When you look at the amount of reps you can have with your team, that number is substantially less than it was five years ago with this new collective bargaining agreement," Gruden said. "You've got a new head coach who's running a new offensive system - he better get it in there quickly, because the games are about to start - so who's going to get the reps and who's going to get the leftovers?

"You don't have time to get three guys reps. You just don't. If you do, you're not running a real sophisticated offense. It's hard to get one guy to go today, let alone two. So there could be a trade. I don't want to start any rumors in Philadelphia, but if they do draft a quarterback with all they have invested in him, I'm sure they'll want to get him as many reps as possible, and that's going to make somebody I think unhappy and perhaps expendable."

It certainly doesn't appear as though a trade is happening at this point. Bradford requested one, and it appears that the Denver Broncos had some level of interest, but that ship has likely sailed.

So how will the reps be split among three quarterbacks?

"I don't know if you counted reps today but in all the scripted team periods it was equal, so all three quarterbacks got the same amount," said Pederson. "I’m not sure what the last period was – it was unscripted – but it was probably pretty similar. And that's the way we're going to approach the offseason."

For now, anyway. When the Eagles get into training camp, Pederson explained that the starter, presumably Bradford, will see his reps increase. Pederson was asked if it there were any drawbacks to splitting reps equally.

"This time of the year, no," he said. "All three of these guys are smart guys, they are sharp guys. I don't have any issues with dividing it up three ways. I know once we get later into camp, we need to get our starter, Sam, we need to give him more reps, but right now I'm not concerned with that."