The Mount Airy native called off performances of her new album 'Spirituals,' saying the last several years have taken a toll on her and her family 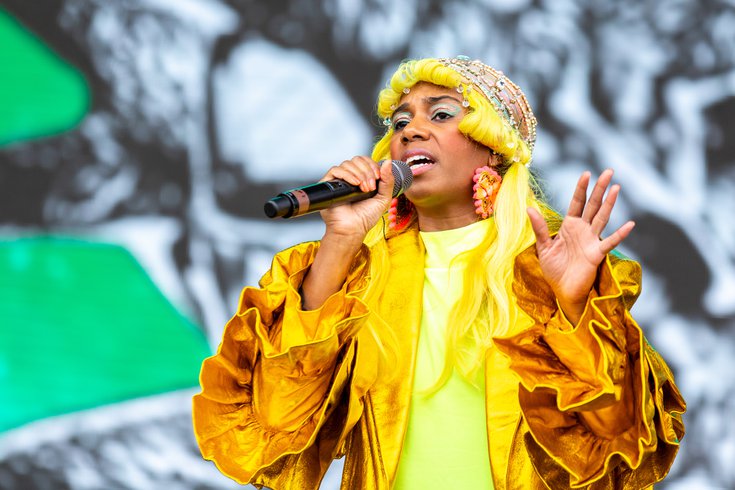 Santigold, a Philly native, multi-genre musician, is the latest in a growing list of artists who have canceled or postponed tours, citing mental health concerns and the 'unsustainable' music industry. Sanitgold, whose real name is Santi White, released 'Spirituals,' her first studio album in six years, on Sept. 9. All tickets will be refunded. She is pictured above on stage in San Francisco in 2019.

Santi White — who performs as multi-genre artist Santigold — shocked fans last month when she abruptly canceled her upcoming "Holified Tour," noting that the last several years in a "relentless industry" has taken a toll on her mental and physical health.

With her announcement on Sept. 26, the Mount Airy native joined a growing list of musicians opting to cancel live performances over mental health concerns, even after two years of uncertainty due to the COVID-19 pandemic. Santigold reassured fans that tickets would be fully refunded and expressed her sadness at the thought of disappointing them.

This was especially true following the Sept. 9 release of "Spirituals," her first studio album in six years. In her letter to fans, Santigold expressed that she faced a difficult decision: "How could I release 'Spirituals,' an album about honoring yourself and refusing to cross your own boundaries, and not take this opportunity to do just that for myself?"

Santigold said she was proud to cancel the tour if it meant proclaiming that she was putting herself first in the face of an industry she said has become "unsustainable for, and uninterested in, the welfare of the artists it is built upon."

Santigold, whose music typically blends pop, hip-hop, punk, and funk sounds, has been active in the industry since at least 2001. She previously worked for Epic Records as an artist representative before making her own musical debut as the singer for Stiffed, a Philly-based rock band that was active until 2006.

She was born in Northwest Philadelphia in 1976, the daughter of Ron White, a political advisor to former Philadelphia Mayor John Street and psychiatrist Aruby Odom-White. After graduating from Germantown Friends School, she attended Wesleyan University, majoring in music and African American studies.

Her solo debut, "Santogold," was released in April 2008 to widespread critical acclaim, ranking among one of the best albums of the year. Each of her following albums — 2012's "Master of My Make-Believe" and 2016's "99¢," both received positive ratings, cementing Santigold as a major player in pop and multi-genre dance music.

Recently, she received a shout-out from Beyonce in the remixed version of her hit single, "Break My Soul," which also included call-outs to other Philly artists like Jill Scott and Tierra Whack.

In a recent interview with Rolling Stone regarding her decision to cancel her upcoming tour, Santigold said that the decision was not easy.

"It starts way before the pandemic," said Santigold. "It starts with the fact that the system was already broken. People were just trying to hold on, pre-pandemic. As the music business has been changing over the years, there's been hurdle after hurdle for musicians. That includes streaming and us being left out of that equation as labels and everybody else were ready to grab their piece of the pie and basically throw us under the bus."

The musician said that inflation, high gas prices, and a lack of tour bus availability have also contributed to the cancellations, as artists have "flooded" the market looking to tour following two years without live music because of the pandemic. Other hot-button issues, like venue promoters and increased prices on ticketing sites, have left musicians with smaller monetary guarantees while fans scramble to afford shows.

For this particular tour, Santigold's concerns were largely focused on the impact that touring would have on her family. As the mother of three small children, she spent the bulk of the first two years of the pandemic home with her family before releasing her latest album.

With less money guaranteed for artists who choose to tour, Santigold wasn't sure how much she would be able to bring back home. That, coupled with issues of chronic pain, led to her decision to cancel the 19-stop tour, which would have included a show at Philly's Franklin Music Center on Oct. 13.

However, Santigold did tell Rolling Stone that she's open to performing live again in the future.

"I will play a show when it actually makes sense," she said. "I just can't do it right now. It's zero sense in it. And I love shows, I love my fans, I would love to play shows for them. But I can't kill myself to do that. And so if an opportunity presents itself, and it makes sense, then I'll do the show."

Santigold is one of many artists that have chosen to cancel live performances or entire tours over mental health concerns, as well as growing economic hurdles.

After canceling a series of shows throughout the summer, Canadian pop star Shawn Mendes canceled the remaining dates on his 2022 Wonder Tour to focus on his mental health. In an Instagram post, Mendes shared with his fans that returning to touring was more difficult on his health than he anticipated, and needed to focus on grounding himself and preparing himself for live performances again.

Fellow pop star Justin Bieber canceled due to physical health concerns. Bieber, who revealed he was unable to perform due to facial paralysis from Ramsay Hunt Syndrome, told fans in a statement that he needed to focus on his health in lieu of finishing his world tour, which was set to run through March 2023.

Experimental pop band Animal Collective also made the decision to cancel their European tour because they "could not make the budget" without losing money. In a statement to fans, the band pointed to a dismal economic reality, inflation, and currency devaluation, as reasons they couldn't reasonably travel to promote their recent album, "Time Skiffs," which was released in February.