PhillyVoice spoke with two of the show's performers, including ensemble member Steve Czarnecki whose grandfather was a Philly detective 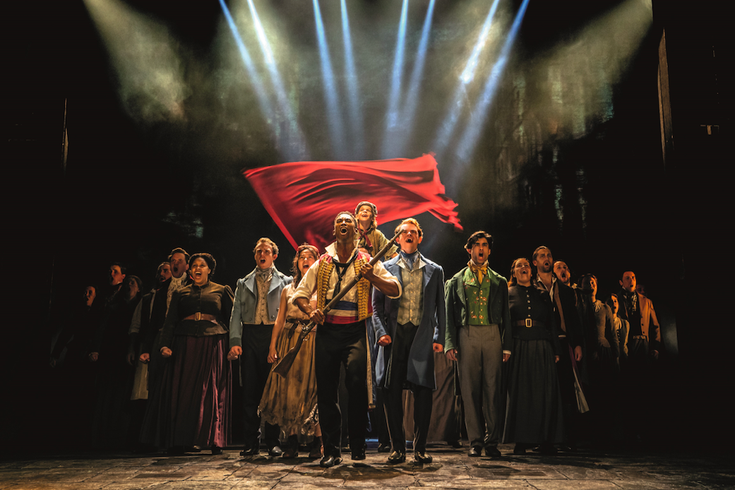 Tony Award-winning theatrical phenomenon "Les Misérables" returns for the first time since 2018 to Philadelphia's Academy of Music, from Nov. 2 through Nov. 13. The cast of the musical, produced by Cameron Mackintosh and written by Alain Boublil and Claude-Michel Schönberg, includes multiple local actors.

A world-famous musical is making a triumphant return to Philadelphia next month, nearly five years after it was last performed in the city.

Tony Award-winning theatrical phenomenon "Les Misérables" will be at the Academy of Music on the Kimmel Cultural Campus from Nov. 2 through Nov. 13 as part of its current national tour. Tickets are available online starting at $20.

RELATED: 'Creed III' trailer shows Adonis fighting an old friend – and his past

The show's score features iconic songs like "I Dreamed a Dream," "One Day More" and "On My Own." The lead roles of fugitive Jean Valjean and Inspector Javert will be portrayed by tour alums Nick Cartell and Preston Truman Boyd, respectively.

Mackintosh conceived the new production in 2009 in honor of the show's 25th anniversary.

“The phenomenon of 'Les Misérables' never fails to astound me," Mackintosh said in a release. "No show in history has been able to continually reinvent itself and remain a contemporary musical attracting new generations of brilliant new talent, many of whom go on to international stardom. No show in the world has ever demonstrated the survival of the human spirit better than Les Miz."

Over 130 million people worldwide in 53 countries (and in 22 languages 😉) have seen @LesMizUs. It hasn’t been called “one of the greatest musicals ever created” for nuthin’ 🤷🏾‍♀️.

Les Miz remains one of the world's most popular shows, having been seen by over 130 million people worldwide in 53 countries and 22 languages. The production last made a tour stop in Philly in 2018, and was set to return in March 2020 before the COVID-19 pandemic caused its cancellation.

The musical's return to the city in a few weeks is extra special because there are multiple cast members who were born in the region or reside nearby.

One such actor is Steve Czarnecki, who is the Fight Captain and part of the ensemble. Czarnecki, who was also involved in the last Les Miz tour, was born in Philly and has many relatives and friends in the city. In fact, he has a personal connection to his additional position as an understudy for Inspector Javert – his grandfather was a former detective with the Philadelphia police.

"It's so special. The last time we were in Philadelphia, I actually made my debut as an understudy for Javert, which had this weird connection to me because my grandfather was a detective for the Philadelphia Police Department for years," Czarnecki told PhillyVoice. "And so it was really interesting getting to play this detective/inspector character, and to do it for the first time in Philadelphia, and I had all sorts of friends and family come and see the show there. It was really awesome. I love coming back ... It's one of my favorite places on earth."

Czarnecki is particularly excited for the show to be performed at the Academy of Music, which he describes as the "most beautiful venue," because it highlights the epic scale of the show, which includes a 17-piece orchestra. He also notes that anyone can resonate with the show's themes.

"The best thing about Les Miz is its storytelling; it can capture anyone in their human existence and experience in a moment," Czarnecki said. "You could be coming into the show having the best day of your life and just be ready to celebrate the triumph of Valjean's journey. Or, you could be having a really tough time and could be relating to the trials and struggles of Fantine. There's just so many characters that are going through so many different levels of experience in the show that are so relatable. Anytime you see it, you have a different experience because of where you are in your life."

Randy Jeter, who plays the Bishop and is an understudy for Valjean, is also excited to perform in Philadelphia. The actor lives in Lancaster with his wife who went to Temple University.

"It's going to be an out of body experience," Jeter told PhillyVoice. "I'm looking forward to it so much. We're going to have so many friends and family attending, it is just going to feel like home."

Jeter believes this iteration of Les Miz and its message of perseverance is exactly what people need to see in a post-pandemic society.

"It's a story of broken dreams," Jeter said. "This unrequited love and passion, sacrifice; it really is a survival of the human spirit. I feel like it's what the country really needs right now. And I'm not saying that just because I'm in it. I really feel like it's one of the best musicals ever written, and it's kind of a blueprint for 'Hamilton,' and a bunch of other musicals that have come ... I think people are really, really going to love the show and love this cast. And just for the people who have seen it before, they're going to fall back in love with it."