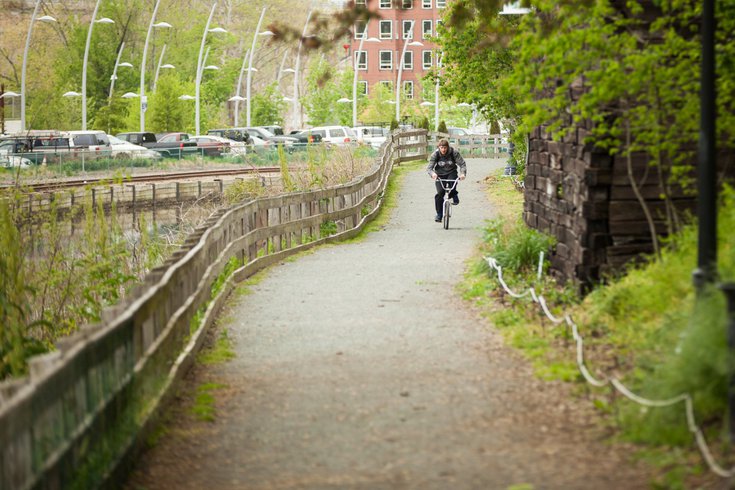 An new section of the Schuylkill River Trail in Chester County will help connect roughly 60 miles of path space between Philadelphia and Reading. Above is a file photo of the trail in Manayunk.

Starting this weekend, pedestrians and bicyclists will be able to enjoy a newly-constructed stretch of the Schuylkill River Trail in Chester County.

A 2-mile section of the recreational path opens to the public Friday afternoon as part of a celebration of Earth Day. The trail segment runs north from Linfield Road to Fricks Lock Village within East Coventry Township.

The $6 million project, which broke ground last April, also includes the construction of a new trailhead at Linfield Road and resurfacing of the county's existing 5.7 miles of the Schuylkill River Trail.

The new stretch of the Schuylkill River Trail is part of Chester County's second and final phase of filling a gap in the path between the Parker Ford section of East Coventry and Pottstown.

When completed, 4-mile extension of the trail will run from Parker Ford to the new Route 422 Bridge that crosses the Schuylkill River at the Montgomery County border near Pottstown. This extension, combined with the existing 5.7-mile-long segment, will provide the county with approximately 10 miles of trail space from Phoenixville to the Kenilworth section of North Conventry

The project's initial phase, which was completed in the last decade, extended the path from the Cromby Trailhead on Township Line Road in East Pikeland Township north to Parker Ford.

When finished, the Chester County portion of the regional trail will run parallel to the Schuylkill River for more than 12 miles, connecting the Route 422 Bridge in Pottstown south to the Route 29 Bridge heading into Mont Clare, Montgomery County.

About 30 miles of Schuylkill River Trail space stretches from Philadelphia to Parker Ford. Following the path's gap, the trail picks back up in Pottstown and runs for about 20 more miles to Reading, Berks County.

The trail's connection over the Schuylkill River into Pottstown is expected to be completed by spring 2024.

The remaining Schuylkill River Trail gaps in Chester County were among those prioritized in connecting nearly 60 miles of path segments between Philly and Reading.

More than 75 miles of the Schuylkill River Trail are open to the public in sections across Southeastern Pennsylvania. The path has primarily been paved and built over abandoned railroad lines, and until several years ago, the trail existed in unconnected stretches known by locally-given names.

Efforts in recent years have focused on closing the remaining gaps in hopes of creating a unified trail system from South Philly to Schuylkill County. Once finished, the Schuylkill River Trail is expected to total approximately 120 miles.