Science proves they're beyond a millennial fad 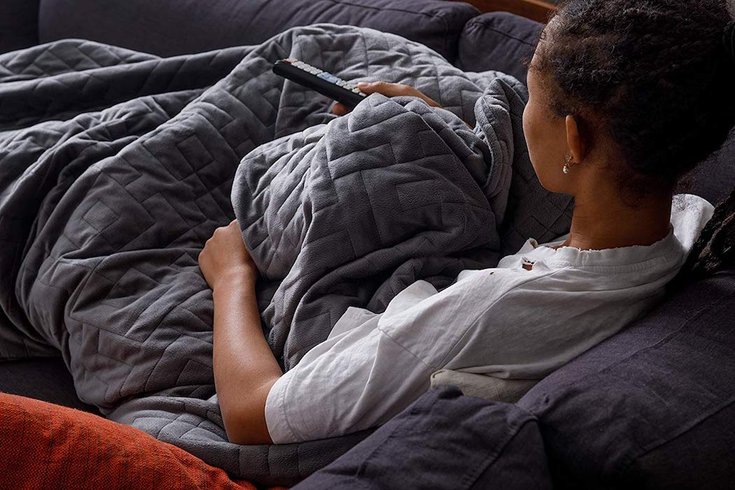 The Gravity Blanket is one of the stress-relieving weighted blanket options on the market.

Weighted blankets, in case you’re not in the know, are the ever-so-cozy modern solution to insomnia and stress reduction.

A weighted blanket is exactly what you'd picture it to be: "a heavy blanket with evenly distributed weight throughout that essentially cocoons you," according to Popsugar.

The blanket both hugs you and grounds you, and each of these actions affects hormone levels, easing your anxiety. Think about it: hugs naturally make people feel better because they release oxytocin, a hormone that serves to reduce blood pressure, slows your heart, and increases feelings of relaxation. The simulated hug can also release serotonin, a hormone that decreases stress.

RELATED READ: This is how much sleep parents lose after having a kid

The weight and size of the blanket can vary, but the evenly distributed pressure is said to mimic "deep pressure touch stimulation,” which can have a calming, soothing effect, according to Medical News Today.

According to a study in the Journal of Alternative and Complementary Medicine, grounding or weighing down the body helps control the secretion of cortisol when a person is sleeping. Cortisol is released by stress.

While deep pressure touch stimulation is generally considered to be an effective tool, there aren’t many studies on the effects of weighted blankets specifically, Well and Good reports.

These are the main sources of scientific evidence for weighted blankets, according to the health and wellness website:

One small study published in 2006 found that 63 percent of the 32 adults who used such a blanket reported a reduction in anxiety, and 78 percent preferred the blanket to other self-soothing techniques. Another study, published in 2015, found that people wearing a weighted vest (which provides a similar effect) saw reduced sympathetic arousal after only a short period of time.

As for buying a weighted blanket, there’s a few things to know — especially because they don’t come cheap. Depending on the brand, weighted blankets can range from about $100 to $250. Here’s a list of the best ones, according to sleep experts, including one of the most popular brands: the Gravity Blanket.

It’s also important to know what weight to buy. Most blankets range from four to 30 pounds, but don't cheap out with the lightest option. Well and Good recommends picking a blanket weight equal to between 7 and 12 percent of your own body weight.