It’s been weeks since it was unveiled that the congressman's honor was a gag for 'Who is America?'

Sometimes it’s fun to wonder how much time politicians spend reading the news during their busy days. Some seem preoccupied with the internet. Apparently, that doesn’t apply to everyone.

Scott Perry is the current U.S. Representative for Pennsylvania’s Fourth Congressional District, which covers all of Adams and York counties along with parts of Dauphin and Cumberland counties. He's running for re-election this November in the re-drawn 10th District, which includes all of Dauphin, most of Cumberland and the northern half of York County.

Perry was also, apparently, one of the numerous politicians and influential figures fooled by actor Sacha Baron Cohen on "Who is America?" into sitting down for interviews and/or accepting fake awards for making the “70 at 70” list in honor of the 70th anniversary of Israel’s founding.

Keep in mind, and this is important: The 70 at 70 list does not exist.

Baron Cohen’s stunt was revealed in mid-July when Sarah Palin, and then others, figured out what was going on as Showtime prepared for the show's premiere on July 15. But the folks over at Think Progress noticed Friday that Perry’s campaign site, Patriots for Perry, still lists the 70 at 70 — or, rather, the “70 for 70” as his website has it listed — on the website’s awards page: 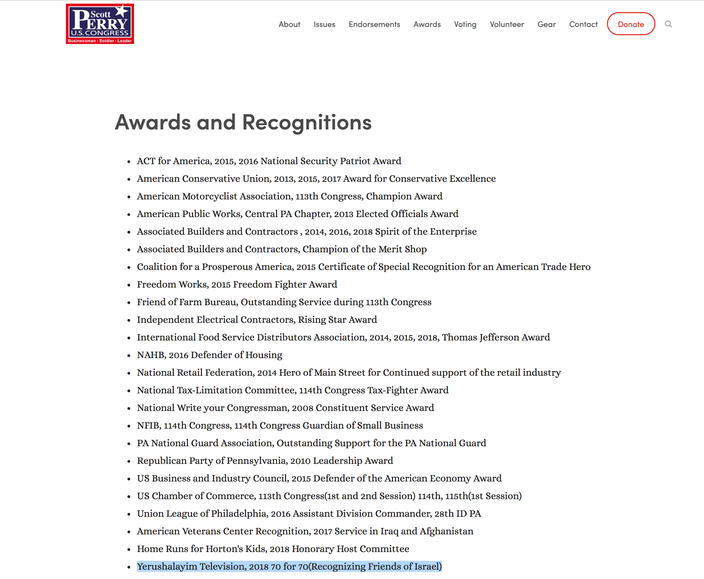 We’ve posted our screenshot above because, eventually, the award probably will be scrubbed from the campaign website when someone on his campaign notices this story, or the ThinkProgress story, or something else.

Probably. It’s been weeks, after all, since the ruse was unveiled, so nothing is guaranteed.

The United States’ midterm elections will be held Tuesday, Nov. 6, 2018.