Mini artworks dot the corridor thanks to community project 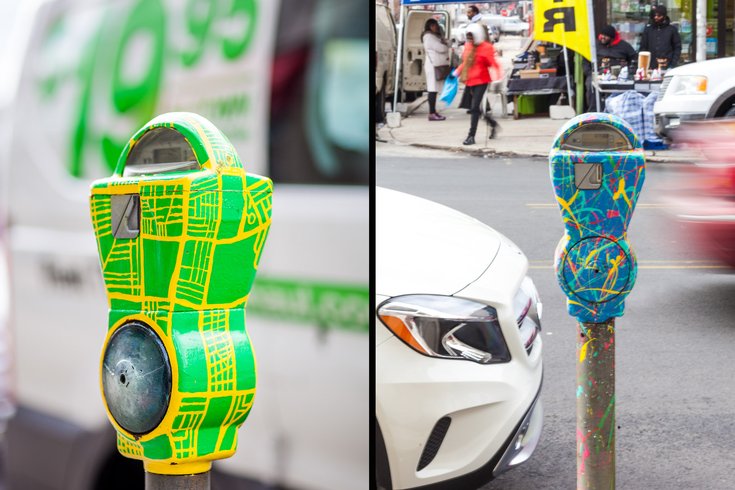 To Monna Morton, anything can be a canvas -- even a parking meter.

A teacher of a Saturday children's art program in West Philadelphia, she explains as much to her students. She lays spatulas, frying pans and drawers out on a table and asks them to transform them into art. So naturally, when Enterprise Center Community Development Corporation -- founded in 1989 to provide economic opportunities to minority entrepreneurs -- called for artists last summer to take the same approach to 52nd Street's parking meters, Morton hopped on board without a second thought.

"The idea [with the class] is to create something within your own environment, and it's the same thing with a parking meter: You make it become a piece of art in its environment, almost like a monument," Morton told PhillyVoice. "They look like little statues along the corridor.”

Morton was one of eight artists commissioned by Enterprise Center last fall to paint approximately 24 parking meters that span Arch to Walnut streets along 52nd Street, what's often described as "West Philly's Main Street." Philadelphia LISC funded the project with the mission of tying the community surrounding the 52nd Street corridor in with the project, and West Philadelphia artist-resource group Small But Mighty Arts, meanwhile, helped connect local artists with the project. 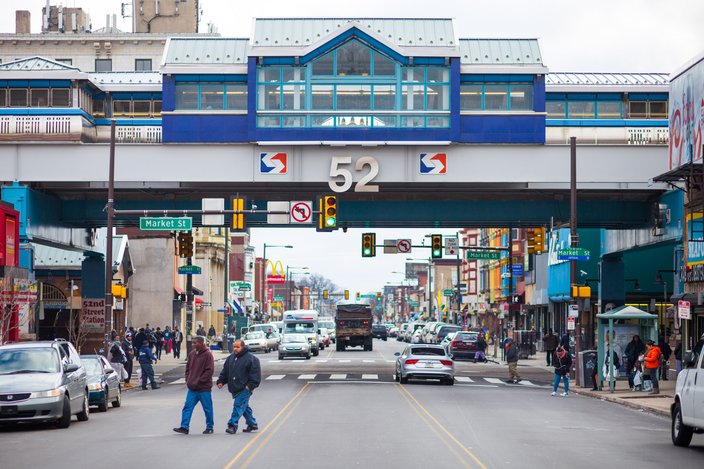 The intersection of 52nd and Market streets in West Philadelphia. 52nd Street is commonly referred to as "West Philly's Main Street."

“What’s really great is there were community leaders and residents who actually selected these artists," Erica Hawthorne-Manon, executive director of Small But Mighty Arts, told PhillyVoice. "So the community had an impact throughout the process. Whether it was the artists speaking with the community to find out interests and needs, or being with neighbors as they painted and worked. It wasn’t just that artists stepped in and did something for folks; it was a community effort.

Brian Nothing, another of the eight artists, told PhillyVoice he appreciated that the project wasn't just another collection of "art school people."

"When I started talking to community leaders and business people, my ideas kept changing on what I thought I was going to do," Nothing said. "But I took a lot of feedback from just the vibe of the street, and I did lots of stuff on poles where little kids would see them and adults might not, and more interesting things up top." 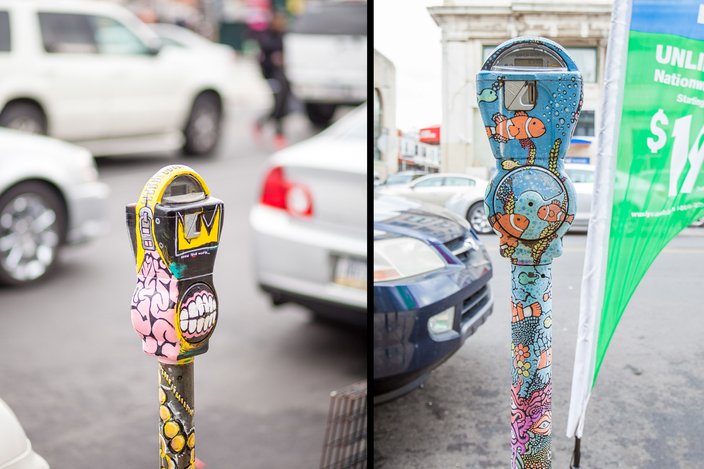 Meter murals by Terrance Woolford, left, and Brian Nothing, right.

A native of Southwest Philadelphia, Morton said she remembers a time when 52nd Street was a true commercial corridor -- a place she went scouting for school shoes and shopped on a Saturday. While painting her murals -- hers, along the southwest corner of 52nd and Market streets -- she went in wanting to capture that feeling of vibrancy.

"One of the things I got from the neighborhood and initial meeting is, they wanted something that would bring joy, light and hope -- a sense of what it used to be like," she explained. "Not nostalgic, but capturing the happiness, when it was prosperous. That era when it wasn’t downtrodden and not a place people feared to be in." 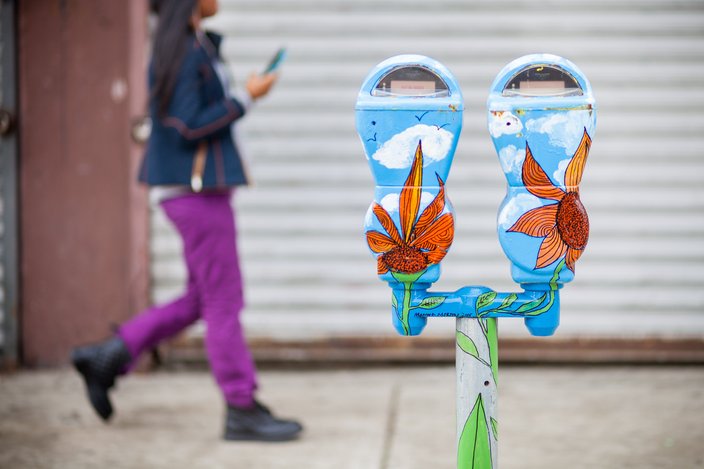 Meter mural by Monna Morton. “I did plants, flowers and birds [for one mural],“ Morton said. “And not in a traditional sense, but capturing the African-American and the African spirit that some of the vendors have [on 52nd Street].“

Rahjer Anthony, a Philadelphia LISC Americorps VISTA, came up with the project as part of what he called a 52nd Street "transformation." He told PhillyVoice he was inspired by a similar YorkArts (now "Creative York") beautification project. And because the rusty meters are likely to stay put, despite the replacement of many with kiosks in places like Center City, the parking meters approach just made sense -- doubling as a way to brand the street. (Each artist was also responsible for painting one meter with blue and gold, what they've made the official colors of the corridor.)

Akeem Dixon, 52nd Street commercial corridor manager for Enterprise Center, further remarked that the Philadelphia Parking Authority has taken notice of the meters and reached out with high praise. There are hopes that the project will be replicated in other neighborhoods in the future.