The Sixers center had just been named an All-Star starter, but it was their absent guard who caught more than a few strays from the NBA legend. 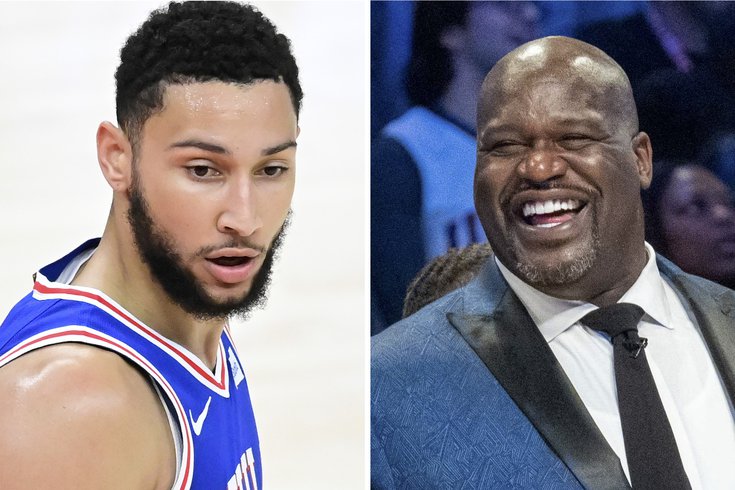 Ben Simmons has yet to play this season for the Sixers. Meanwhile, his teammate Joel Embiid was just selected to start in his fifth straight NBA All-Star Game and is considered by many to be the frontrunner for the MVP award. But according to Hall of Fame center Shaquille O'Neal, that's hardly the only difference between the two.

That latest honor for Embiid was announced during Inside the NBA, prior to the Sixers' matchup with the Lakers at the Wells Fargo Center on Thursday night. And while Shaq was praising Philly's big man, he wound up absolutely crushing Simmons for his inability to "take criticism without being a crybaby," going so far as to say he doesn't respect him.

Here it is again in case you can't listen where you are:

"[Embiid's] doing what he's supposed to do. He's dominating. We/I stay on big guys because I care about them. I want them to play a certain way. I want them to play at a certain level. The difference between [Embiid] and his soft partner is he can take criticism without being a crybaby, and he still wants to play. Because me and Charles, we've been on him. We told him to his face what he needed to do. He didn't cry. He didn't say I want to be traded. He didn't complain about mistreatment, and that's the difference. That's why I like and respect him.

"The other guy [Simmons], I don't respect. I mean, think about it, you're missing a whole season because they asked your coach a question, "Can they win without you?" And your coach gave a funny answer. That should tell you that you need to get in the summer time and work on your game. You don't think I haven't been criticized by you guys and Stephen A. [Smith]? You don't think I've been criticized by the New York and L.A. media? Great players get criticized, but great players also step up to the criticism and perform. So this other guy? I don't respect him. I would get rid of him."

While Simmons continues to hold out after demanding a trade because Doc Rivers hurt his feelings, Embiid has been simply dominant, averaging 29.0 points, 10.8 rebounds and 4.3 assists per game for the season. Recently, however, he's been on another level. Heading into Thursday's game against the lakers, Embiid had at least 38 points and 12 rebounds in four straight games, the longest streak in franchise history.

Simmons, on the other hand, has only been seen in the form of trade rumors, with the latest suggesting the Sixers could try to wait until the summer in an effort to land James Harden, but with the trade deadline looming, we'll know soon enough.

Meanwhile, Shaq's comments in front of a national TV audience that was tuned in to see the All-Star teams revealed aren't going to help raise Simmons' value as Daryl Morey works the phones.

But sometimes the truth hurts.