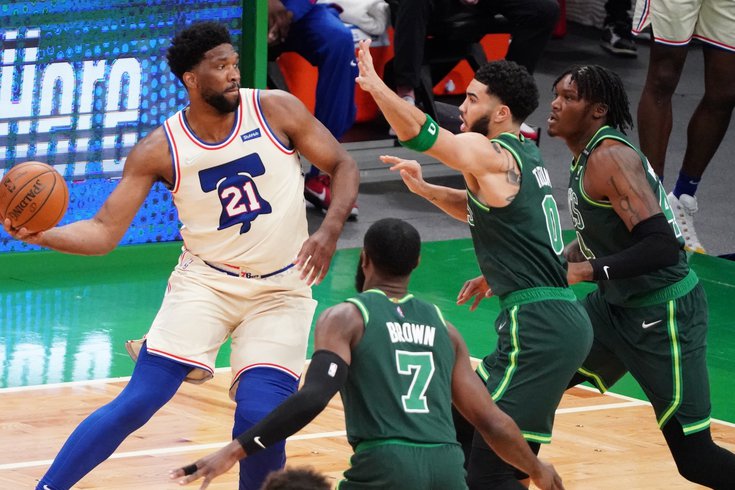 Joel Embiid battling against the Celtics.

The Sixers' 2022-23 schedule is here, and as usual, it's time for us to pretend we have any idea how this is going to play out months before the season begins. Injuries, COVID-related absences and normal regression/progression around the league? Throw those out and let's just do a vibe check.

Seriously though, at least we have a broad idea of what the season looks like. Here's the full schedule.

On to the #analysis.

Congratulations to the Sixers on their new-look roster, your reward for upgrading the team is having to play the two teams most people are betting on to win the Eastern Conference this season. To make matters worse, both the Bucks and Celtics are among the teams with the most established identities, featuring core groups that have played a ton of games together over the years. Well, at least that's true if the Celtics opt not to trade for Kevin Durant.

Getting early stress tests out of the way is a good thing, though, as the Sixers will be fresh off of training camp/preseason with all of their reps and plays burned into their brains at that point. They won't have a set in stone rotation at that point, but we should get an early look at how their Plan A looks against a Plan A from teams that have been developed over much longer periods of time. And hey, maybe you can catch a pair of very good teams early enough in the season that you can steal one or both games — the Sixers have a lot more to prove than the Celtics and Bucks at this stage, so delivering a haymaker opening blow would send a great message to kick off the season.

The month of March can already be a brutal time for NBA teams with serious aspirations, as it tends to be the time where teams take their foot off of the gas pedal and rest up a bit for the playoffs. The bad news for the Sixers is that phenomenon will be combined with a road-heavy slate, which could depress Philadelphia's record as they come down the home stretch.

In March alone, the Sixers play the Miami Heat, Dallas Mavericks, Milwaukee Bucks, Chicago Bulls, Golden State Warriors, Phoenix Suns and Denver Nuggets all on the road, with five more games away from home mixed in with that stretch. If they emerge from those games with even a .500 record, let alone an above-average mark against those teams, they will have set themselves up for prime positioning in the playoffs. Doing so in a month with a whopping 17 games played would be quite a feat.

Here's the bad news — the Sixers have to face all three of Milwaukee/Boston/Miami in the final week of the season, before ending with road games in Atlanta and Brooklyn to close out the calendar. I'll have to compare it to the rest of the league, but I would imagine they have one of the tougher closes to the season of any team in the league. Five of their 12 back-to-backs coming in the final month-and-a-half is also not great, and will probably force the Sixers to use a lot of load management days for their stars (and role players) leading into the playoffs.

The first period of the schedule that jumps out in a good way is the run beginning with a trip to Charlotte on November 23rd. From that game until their meeting with Golden State on December 16, I would argue there isn't a single game they should be underdogs for. There are some tougher tests in that group (the Grizzlies, the Lakers if they're healthy) but the rest of those teams are opponents they were outright better than last year, opponents they beat up on because of matchup quirks, and potentially both.

Of course, these runs can be a bit deceiving because when you face a row of substandard opponents, the tendency can be to let down a bit. The Sixers have done a better job of avoiding those pitfalls over the last two seasons, and they have a deeper group to cope this year, but it's still a problem you have to consider when sizing up the schedule.

Philadelphia's gift for ending the season on a brutal note has to be the portion of the schedule from Christmas onward. Though there are some playoff teams and tough matchups sprinkled in there, getting a nearly month-long run against teams they should be better than can't be taken for granted. Save for a matchup against the Clippers in mid-January, the Sixers will be up against a series of teams that probably top out as mid-tier playoff teams on their best days. Though they'll be jetting around the west coast for the back half of that period, they have every ability to pile up wins against the likes of Indiana, Detroit, and Oklahoma City before they reach that part of the schedule.

Maybe "Simmo the Savage" will have some Thanksgiving turkey at his old home with Nick Castellanos' family.

Between a Christmas Eve tilt between the Eagles and Cowboys and the Sixers' Christmas Day meeting with the Knicks, all the holiday traditions are getting thrown out the window for a lot of people in the area. As someone who has mostly skipped out on the churchgoing surrounding big holidays for a while, the big loss at this point is quality time with the family. For those of you who looking to get away from the family, talk about a good excuse to get away (or maybe a bad one, depending on whether grandma is an Embiid fan or not.)

Personally, I'm going to be the most miserable sports writer in the area during that time period, so I hope the rest of you get some joy from it.

Here's a new one for the NBA, with the Sixers part of a weeklong slate featuring individual and team-based rivalries. Love the concept, not sure I love the execution. You can only play so many Sixers-Celtics games a year, and I understand the Simmons-related angles for the Nets game, but it's still pretty difficult to call the Nets a "rivalry" of any sort because it has been rare for both teams to be good at the same time throughout their respective histories.

Oh well, another reason to get tuned up for a January game is fine.