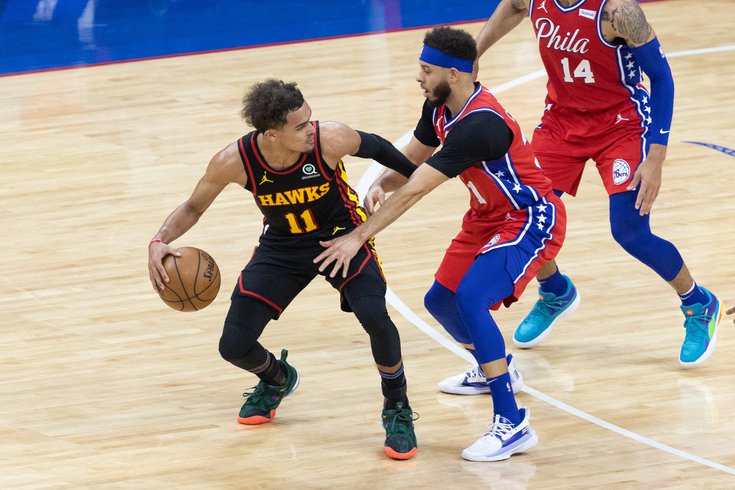 Can the Sixers find a recipe that works for handling Trae Young?

You don't have to grind the tape to see exactly what went wrong for Philadelphia in Sunday's Game 1 defeat. Atlanta's Trae Young did whatever he wanted, whenever he wanted in the opening 24 minutes, carving Philadelphia up en route to 35 points, 10 assists, and the victory over the Sixers. Figure out a way to slow down Young, and you go a long way toward evening the series before it moves to Atlanta later this week.

Nobody had a better view of what went wrong than Danny Green, the guy who spent most of the game on Young, to the chagrin of Sixers fans everywhere. And he'll be the first to tell you how big a challenge the assignment is, with Young bringing a potent blend of skill and salesmanship to the table that puts defenders (and officials) in a tough spot.

"The tough part is, as a defender, you want to kind of feel the guy and get into his body when you're going over screens.," Green said Monday after a team film session. "It helps you to get over the screen and not [hit] the screener so he can't screen you as much, and also to get the offensive guy not to come directly off the screen, shoulder to shoulder, when you're not able to get into his body. He's going to obviously draw contract, draw fouls, stop, jump backward, whatever he does to get the foul. You have to play off him more, which allows him to run more freely, so it's tough for anybody to guard anybody that way."

The difficulty of walking that line has been a major talking point for the Sixers in the 48 hours following their defeat. They're not totally out of line for calling attention to it — the Sixers lost a challenge in the third quarter on Sunday on what appeared to be an easy overturn, with Young rewarded for going out of his way to push off of Matisse Thybulle. Ben Simmons picked up two quick fouls early in the second half when he took the Young assignment, inspiring him to wonder after the game if the officials would actually allow him to take advantage of his size. Whether they've done enough to draw the attention of the officials or draw a fine is hard to say, but at the very least, Philadelphia is trying to make their case by any means necessary.

Playing politics, though, is not going to be what stops Young. The Sixers were so aware of their own strategic failures on Sunday that they had shifted things around by halftime, sending more bodies and different looks at Young in an effort to keep him off-balance. They need a lot more of it in Game 2.

One area where Rivers held Green personally responsible after the game was on plays where Young decided to reject the screen in pick-and-rolls and take Green himself. There were schematic issues to blame when Young came around the corner and dropped floaters on Philadelphia. Not so on a look like this:

"It's all body position," Rivers said Monday. "Once the pick-and-roll coverage is called, you have to take your man to the pick. It's just that simple. And that's not hard, we have to do that. If we're going to give Trae the ability to go either way on pick-and-rolls, we're in trouble. That's something that's discipline. We all know it, Danny knows it, it wasn't just Danny, it happened on several guys and so that can't happen, that's for sure."

Whether the general public accepts that explanation — or the complaints about officiating for that matter — is another story. Green's whole thing is supposed to be bringing fundamentals and veteran saavy to the table. He doesn't have the legs or the length to win with last-second recoveries, and he rarely even gave himself a chance to attempt one of those in Game 1. It's why many have demanded for a matchup switch (and perhaps a lineup switch) to get somebody else on Young in Game 2.

NBA.com's matchup stats, insofar as they're reliable as a barometer of defense, paint an ugly picture:

That's an incomplete data set, to be clear. Simmons picked up the aforementioned fouls in the third quarter, driving home a point Rivers has made all year about the danger of putting him on the best opposing player from the get-go. If Simmons can't stay on the floor due to foul trouble, they're going to end up in a compromised position sooner rather than later.

"We like Ben on Trae, we don't like him on him all game," Rivers said Monday. "Trae does a great job of drawing fouls, and so we got to be careful with that. Some he gets fouled, some Trae sells pretty well. And so, you know, listen, if Ben's allowed to guard him, then yeah, I'm all for it. And then Ben has to do a good job on him as well."

Whether that's Rivers playing coy or a reflection of his actual thoughts on the matter will only be determined when we see Philadelphia line up for the first defensive possession on Tuesday. The head says Rivers will stick with his guns and go with Green to open Game 2. It would not be a popular move, but it tracks with how Rivers has deployed his guys all season. Simmons has been the second-half closer for the Sixers on defense, and he barely even got to play that role in Game 1. The playoffs are about adjustments, but you don't want to throw the baby out with the bathwater.

"Just not to panic," Green said when asked about how to compartmentalize a bad performance. "If a guy scores, it's not going to be 6-10, the score is 100 something to 100 something for a reason. People are going to score, so if a guy scores, don't panic and say oh we need to change this, change that. We lose a game, that's the reason why it's a series...let these guys know, we're obviously not in the position we want to be, but we're okay. There's still a lot of basketball to be played. Still a lot left. We can turn this thing around."

In the immediate aftermath of Game 1, Joel Embiid sounded like a guy resigned to his fate, rather than someone who was encouraged by how he felt in his first game playing through an injury. Things could be better, but things could also be worse, and Embiid's focus at the moment is on doing whatever he can to deliver this team to the promised land.

Ultimately, there were some questions following the opening loss about whether Embiid's health (or lack thereof) had impacted their setup to start the game. It's a fair question — leaving Embiid hanging back toward the rim to save wear-and-tear on his knee early in the series makes some sense. But Rivers wouldn't use that as an excuse for how they set up, only saying he was concerned for Embiid when things went into scramble mode late in the fourth quarter.

Fair enough, but the Sixers will almost certainly play higher (and harder) coverage against the Hawks in Game 2. Are the Sixers concerned for Embiid, assuming he plays? Rivers wouldn't go that far, but he knows there's a limit the Sixers will run into sooner than later.

"I like it, but I don't like it for game, you know? Last possession of the game? Yeah," Rivers said Monday. "Coming out of a timeout? Yeah. A whole game? No. It's just too much to ask out of Joel."

We'll find out pretty quickly what Rivers (and Embiid) think is too much to ask. Philadelphia continues to evaluate him on a day-to-day basis, and will likely be doing so the rest of the playoffs.

Doc Rivers did not mince words when asked what he saw from the all-bench unit on offense in Game 1.

"Nothing," Rivers said. "No really, really.  I thought their unit ran what they wanted to run, we didn't run what we wanted to run.  We lacked discipline in how we ran our offense throughout the game, both units, honestly.  But that unit can be way better. We obviously for the most part have had Tobias or Ben with that unit. Last night, we didn't early, because we extended their minutes because we're down so much. But that unit even as itself has to be a better executing unit. I think they had three or four turnovers in that stretch. And those things can't happen."

That doesn't sound like a man who is dead set on avoiding the all-bench unit altogether. Stay tuned.