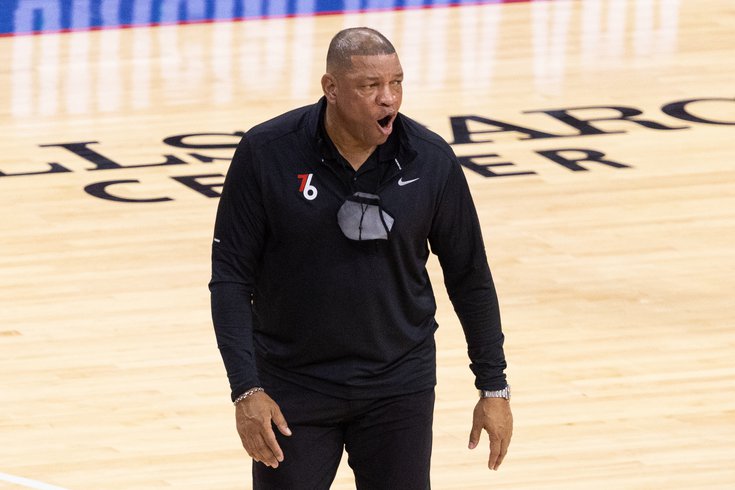 I don't get emotional watching sports anymore. And my wife hates me for it.

She'll be the one standing and screaming at Greg Ward for dropping a deflected pass on first and 10 in the opening minutes of a game. Come the fourth quarter, I'll still be sitting there calmly while the Eagles try to drive the ball down the field for the go-ahead score. She'll have migrated to another room, unable to watch the action live, because either outcome — good or bad — is just too much to bear.

The funny thing is, that used to be me (to some extent, at least, although I was never the most excitable person). But over a decade of working in this industry covering Philly sports has changed me. I no longer look at the local teams from a fan's perspective, but rather as someone staring down the prospect of added work. And when I'm actually working? Forget it. I sat silently on my couch as the Eagles won their first Super Bowl. Thirteen years earlier, when they lost to Tom Brady and the Patriots in Jacksonville, I was sitting on the street with my head in my hands fighting back tears.

Now... nothing. Every play, every moment could be the thing that requires me to log back onto my computer and dive full-on into work, no matter what else is going on. Even if it's not, I can't help but see something and think: That would make a good story, we should probably get someone on that. And if we don't, someone else will, and then I feel like I'm not doing my job.

That's a tough way to watch sports — it certainly makes it almost impossible to enjoy games — and, as a result, your fandom slips away and what you're left with is nothing more than a nostalgic feeling of a time when your entire mood hinged on the outcome of a game. (Now that I think about it, that also sounds like a terrible existence, but I digress). So I sit, and watch, and when the game is over I move on with the rest of my day, unaffected by the final result and free of any of the emotional scars that come with being a fan in a city where it feels like sports exist simply to test the limits of a person's breaking point.

It's part of the reason I've sought out other sports that hardly ever intersect with my working life, where I can watch through a fan's eyes — and yes, my wife also hates that she now wakes up every Saturday and Sunday morning to Premier League matches on the television (and golf in the afternoon).

It's also part of the reason why it was so surprising on Sunday when I found myself standing up and screaming at the television once again. And I was doing it with a local team for the first time in as long as I can honestly remember.

But I wasn't doing it as a Sixers fan. I was yelling at them as a basketball fan and someone who loves the game. Because whatever that team was doing for about 36 minutes on Sunday could hardly be considered basketball. Every frustrating thing that can happen in a game was happening to the Sixers — and for the most part, it was their own damn fault.

I was screaming at Doc Rivers to mercifully take his all-bench lineup off the floor. I was yelling at him to get Danny Green off Trae Young — and for the love of good stop having him pick him up 75 feet from the basket. I was screaming at the defense to stop over-committing on the help, a side-effect of Green beings stuck on Trae and getting beat off the dribble, and leaving the Hawks shooters wide open for corner threes (or their big men open for lobs). I was screaming at the referees to be more consistent. And the turnovers? Don't even get me started on the turnovers.

In the end, all of those mistakes — ones that had the Sixers down as many as 26 points and 20 at half following one of their worst stretches of basketball all season — and this essentially came down to a one- or two-possession game thanks in large part to the Hawks' overall lack of playoff experience. All of those things going wrong, and it was still that close.

There are two ways of looking at that as a fan. You can either look at it as a positive moving forward — there's no way this team can play this poorly again — and even then they were able to make it close in the end so imagine when they play well. Or, you can look at it as a massive missed opportunity. Cut those turnovers in half? You win the game. Make a few more free throws? You win the game. Put Ben Simmons or Matisse Thybulle on Young earlier? You likely win the game. Stop that all-bench lineup from allowing the early lead to balloon? You never fall 20 points behind and, in the end, you probably win the game.

Even in smaller individual moments, you could see this unfold. The Sixers would go down 24 points. They would go on a run and cut it to 16-18 points, and instead of holding it there until they could get another run in them, they would turn the ball over, the Hawks would get a corner three, then another stop and another Hawks bucket, this time maybe a drive and lob from Young to Clint Capela, and suddenly the lead was right back up over 20.

It was like they lulled themselves into a false sense of security, thinking that run would simply continue, forgetting that there's an incredibly high-level scorer on the other side of the ball. It almost felt like that was the case for the game as a whole, as if after a big Game 5 win over the Wizards, the rest of the team felt like they could take their foot off the pedal in this one because Embiid was returning to the lineup. He held up his end of the bargain, posting 39 points while playing a team-high 38 minutes despite a small tear in his meniscus. But did everyone think that because he was back they wouldn't have to work as hard? It certainly felt that way at times, so much so I actually found myself questioning whether this game would've been closer if Embiid had been held out and everyone else was forced to step up in his absence, not unlike the series finale against Washington.

It wasn't until the final moments of the game when the team really seemed to wake up — but even then, in the midst of the comeback, you'd have something like Danny Green suddenly deciding not to pick up Trae Young under the other basket and instead letting him waste nearly 20 seconds off the clock. As a veteran, not to mention that it being the opposite of what he'd been doing all game, Green has to show better awareness here.

At least Embiid seemed to be aware of the situation. But it was infuriating nonetheless and makes you question the impact moments like this — and there were several of them, from dumb turnovers to silly fouls — collectively had on the final outcome. Because from there, the team was finally able to get over that hump and cut the Hawks' lead to single digits and eventually a one-possession game in the final minute.

But it was all too little too late, and me screaming at the TV for the first time in years didn't seem to change things. Sloppy basketball is sloppy basketball. And in the playoffs, that's going to cost you even if you're the No. 1 seed, playing at home, in a game you're favored to win easily. And all that's before you considering the pre-game news that your MVP finalist was good to go.

Seeing all the mistakes made along the way and realizing that despite all that, the Sixers still, with a few bounces going their way, could've stolen a game they had no business winning. That's maddening.

Game 2 is on Tuesday night. Let's hope they allow me to stay seated and actually enjoy this one, because I honestly don't know how you guys do this every game.