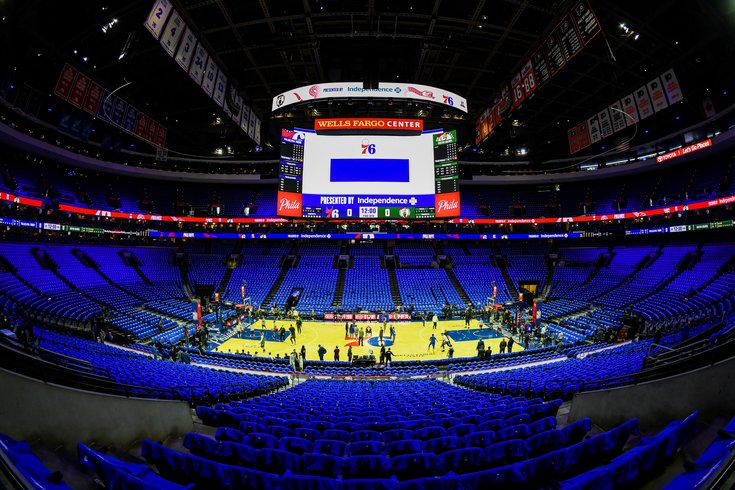 The NBA has already taken the first major step to protect the health of their players as coronavirus concerns grow, temporarily restricting access to team locker rooms. But as countries around the world take drastic steps to limit the damage and spread of the virus, questions remain about whether the Sixers and the rest of the league will end up postponing or playing games behind closed doors as a result of the worldwide pandemic.

A conference call is expected to take place between NBA officials and team owners on Wednesday on the subject of moving games behind closed doors, but discussions on that subject have been minimal amongst players and team personnel so far, with the focus mostly on current impact and preventative measures recommended by the powers that be.

"It's scary," Josh Richardson said of the current situation. "I'm praying for the victims of it, hoping for the best for those who have been affected, directly or indirectly, and that's all I can really say about it. Try to stay safe."

Second-year guard Shake Milton told reporters on Tuesday that their instructions have been similar to the talking points you've all read or seen on the news — wash your hands, no high-fives, and stay on top of keeping things sanitary. Not a bad life rule across the board. They may be a billion-dollar franchise (or more if you believe Forbes) but the Sixers are working with the same information.

"There are people that are educated and are employed to provide whatever information we're all getting, and far be it from me to question much," head coach Brett Brown said Tuesday. "I'm just following the lead of people that are in the know, I concede it is a different course for sure. Personally, I am fascinated by the whole thing, but as it relates to our job and what we're able to do or not able to do, it hasn't reached a stage [where] I feel it's impeding our ability to prepare or coach or whatever yet."

"There has been so much that's gone on from things from our own organization," Brown added. "Before we played Golden State, their team doctor came in and explained this is their venue policy, and the procedures, the protocol that are now in place to make us feel more comfortable. They are aware there is some anxiety, at that stage in San Francisco there was quite a few cases, there was a cruise liner expecting to dock over in Oakland that ultimately would transfer some of the passengers to San Francisco, and so that was mentioned. But in general, we have had a lot of information given to us."

The spread of the virus seems to be putting the NBA on a crash course with more drastic measures. The city of Philadelphia announced its first confirmed coronavirus case on Tuesday afternoon, and estimates around the country have begun to skyrocket. Massachusets Governor Charlie Baker declared a state of emergency Tuesday, announcing that confirmed cases in the state had more than doubled from 41 to 92 in a 24-hour period, with 70 of those cases connected to a conference in late February.

Following the announcement of first confirmed case in the city, Philadelphia city officials recommended that people should not attend gatherings of more than 5,000 people. The Sixers play their home games at Wells Fargo Center, which can hold nearly 20,000 people, but the team says they are staying the course as of this moment.

"We are aware of the recommendation offered today by the Philadelphia Department of Public Health," a Sixers team official told PhillyVoice on Tuesday evening, "which included no mandates to postpone or cancel events, so there are no changes to our game schedule at this time. We will continue to monitor the situation, in coordination with the NBA and Wells Fargo Center."

Their control of the situation, it's worth noting, might not last much longer, pending the outcome of the conference call on Wednesday. But the players are not exactly prepared for that moment if it arrives in short order.

"I haven't really thought about it, but that's an interesting dynamic, I think it'd be very weird for a lot of guys because we're used to playing in front of packed stadiums, I guess it would be like a pickup game at that point. It would be like a pickup game, we might as well just call our own fouls," Richardson told reporters Tuesday. "I think teams would have to bring our own energy, I think that would be a big advantage or disadvantage for a lot of people. So I think it would be a lot of internal things that would have to line up."

More questions emerge as it relates to how the fans will be treated given the current circumstances. In a conversation Tuesday evening following the broader recommendation from the Philadelphia Department of Public Health, a team official provided the following statement to PhillyVoice on the subject of fans seeking potential refunds for tickets.

"We're going to manage that on a case-by-case basis, and we will work closely with our fans toward finding another game for them to attend in the future," the team official told PhillyVoice.

As concern grows around the country, the prospect of playing games in front of an empty gym is obviously pretty far down the list of concerns during a public health crisis. The Sixers may not be fired up about the prospect of that happening, but if it comes down to it, they are committed to going to work.

"It would be obviously a rough situation and not ideal by any stretch of the imagination," Brown said. "But if the people in the know felt like that was what was needed to provide the greatest level of safety, then that's what we will do. We all obviously hope it doesn't get to that stage."