Five early takeaways from the Sixers' preseason opener vs. Boston

Here are some things we learned in Doc Rivers' first game at the helm in Philly... 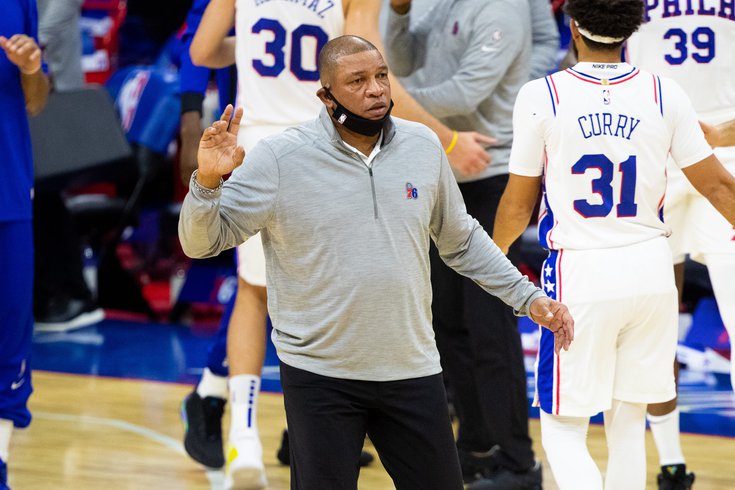 We've lived through nine months of a global pandemic, and the Sixers have turned over most of their basketball ops department, but it turns out they're still pretty good at home. Kicking off the preseason against the Boston Celtics, Philadelphia looked good (if a bit sloppy) in their first game under Doc Rivers.

Unlike in a normal year, we won't have a lot of time to study trends before the season starts. The second and final preseason matchup for Philadelphia is on Friday, and then it's off to the races for Joel Embiid and Co. next week. It's less time than just about everybody wants (save for TV executives), but it's what we have.

If you're ready for some snap reactions and early takeaways from one preseason game, look no further. While we're a long way from crowning anybody yet, it's never too soon to hit the tape.

Joel Embiid is ready to go

Doc Rivers did not mince words when asked about the performance of his star player on Tuesday evening. With Embiid getting a lot of his looks on actions that were not designed for him, the head coach viewed this game as a blueprint for how he can dominate without just standing on the low block all game.

"Phenomenal," Rivers said of Embiid's performance. "You know, it's a great example for Joel. Like we ran our stuff, but we didn't run his stuff, and he still had 18 [points]. And you know, that's one of the things that I was telling him. 'Joel, we can run continuity offense and not even run any plays for you, but you're still gonna end up with the ball because you're the best player, and you'll see that happen.' That did happen tonight, I thought that was a great thing for Joel to see."

The ball finds the best player, no doubt, but it also finds energy. That's something Embiid has been short on at times in the past, and something he showed an abundance of on Tuesday night.

One of the downsides of an Embiid-centric offense in the past has been how static the floor can get, even when the play doesn't really involve the big guy. When he's in the post, that's by design so he has easy reads around him. But it's arguably worse when he's out of the post, with Embiid defaulting to standing still and preparing to shoot a three.

There was a noticeable change in Embiid in game one under Rivers. On two different occasions in the first half, Embiid saw and tore through space when the ball was in Ben Simmons' hands, scoring on one cut and getting fouled on another.

It's a reflection of something that seemed obvious — he's in better shape and more engaged this time around. If Embiid is lighter on his feet, he's a dangerous man.

He may not be Lou Williams or Jamal Crawford (yet), but Shake Milton has been a Doc Rivers favorite throughout training camp. The lovefest isn't going to stop after the opener, as Milton (18 points, 8/14 shooting) arguably had the best night of any Sixers player.

Milton has earned the trust of the head coach rather quickly, something Rivers wants him to feel constantly so that he's just playing, not thinking on the floor.

"I tell him literally every day, ‘Be Shake, be Shake,’ I probably have said that 15 times already," Rivers said Tuesday. "And I thought tonight he did that. He's very comfortable, under control, didn’t force a lot of shots, he was fantastic."

Without subjecting you to a barrage of Milton clips, suffice it to say he hit every type of shot in the book on Tuesday night, capping it off with a pull-up three in a two-for-one situation at the end of the third that would have made the aforementioned Williams proud. Milton got hot enough that Brad Stevens actually called for a trap on him as he crossed halfcourt near the close of the third, which he picked apart easily for a Korkmaz three-point attempt that unfortunately bricked.

"When I'm out of the game and he's running point, he's able to take over and get buckets and get everybody in line," Ben Simmons said Tuesday. "And the experience he's had, being in the bubble and starting later in the season, it's been great and he keeps getting better and better, which is great for us."

More importantly, Milton seemed to make use of the added bulk he put on this offseason to mix it up on defense. He had a couple of really nice defensive sequences against a big, athletic wing in Jaylen Brown, drawing a charge in the third quarter and executing a disciplined contest in the mid-post in the second. He's going to continue to have some issues with lateral quickness, but it was a terrific start on both ends for Milton.

...and Dwight Howard is going to help him

It does help that Milton has a running mate on the second unit who Rivers called "phenomenal" after the game. The head coach and I agree on that assessment — Howard looks the part of a high-level backup to Embiid.

Milton hooked up with Howard for a lob to close out the opening quarter, and it was far from a clean execution, with Howard getting minimal contact for the screen. No worries — Milton threw a brief hesi to create separation, and it was easy money on the oop.

Howard's bigger impact was as the man creating separation for Milton as a scorer, with many of Milton's pull-up jumpers coming off of Howard screens. It's something they've been able to toy with running together on the second unit in practice, and a combination that should only grow stronger over time.

"I definitely feel like it's coming along well," Milton said of their partnership. "Somebody like Dwight, he's gonna set really good screens for me, and I know he's gonna get guys open, whoever the ball handler is. So it makes your job, it makes your reads a lot easier. You know, whether or not you're coming off the shooter, you're coming off and then firing to the opposite corner or hitting him on a lob, it just kinda opens everything up for you."

Tyrese Maxey is going to play his way into the rotation

When the rookie struggled during his opening stretch of play in the fourth quarter, I worried for a moment the rookie was going to be the victim of his own bad luck after missing the start of camp. In a two minute sequence, he was torched by a Celtics player, traveled with the ball, fouled someone on defense, and then got blocked pretty emphatically at the other end. Not the start I think he imagined.

Guess he needed to get all of the bad plays out of his system early — Maxey was much better from that point on, announcing his arrival with a crispy Euro-step before showing off a floater package he killed with as an amateur.

Tyrese Maxey is a dog 🔥 pic.twitter.com/nwMip5rTVa

(If you're asking me, anyone who gets their first bucket while "Blow The Whistle" is playing is on a rocketship pointed toward success.)

As for that pesky delay for the start of his camp, Maxey was frustrated by it, but chalked it up to part of the process. And his coach doesn't seem too concerned about him.

"He's a good player. He's going to push for minutes because he's a good basketball player. He knows how to play. Can't speed him up, he's got a plethora of shots, makes simple plays," Rivers said Tuesday. "This kid knows how to defend, he talks on defense."

The Sixers seem more together

Maybe this says more about my goofy priorities observing a game, but one play stood out about all the rest despite being pretty unimportant to the outcome.

With Tacko Fall's back turned late in the first quarter, Ben Simmons decided he was going to gamble for a steal. When he failed to come up with the ball, it could have led to a wide-open three for Jayson Tatum, but Furkan Korkmaz (longtime owner of a brutal defensive rep) timed his rotation and positioned himself so that his vacated man could be covered and he could funnel Tatum toward his big man if he got beat. Tatum settled for a tough three instead.

Watch the upper left corner of the clip, just below the basket. You can see Justin Anderson rise to his feet mid-possession, and when Korkmaz executes, Anderson begins clapping, yelling "Good job! Good job!" at the top of his lungs in appreciation for his teammate.

That is just a small snapshot of how engaged the Sixers were on and off the floor on Tuesday. After a 2019-20 season filled with so many miserable moments and stretches of play, it was refreshing to see this team appreciating the little things, celebrating everyone from the stars to the rookies. The head coach even believes that the rookies are helping to foster the atmosphere.

"I think guys are very supportive," Rivers said. "We have some rooks that are extremely humble and want to listen. That actually pulls a team together, as strange as that sounds, because they want to be in as well. Joel and Ben, all the guys are engaged. But we got to keep it that way. We just can't do it early on and when you hit a bump it goes away. So you know it's good to see, I love the spirit.”

This team will ultimately succeed or fail on the merits of their stars. But when the chips are down, it's this sort of togetherness that has the chance to pull them through.