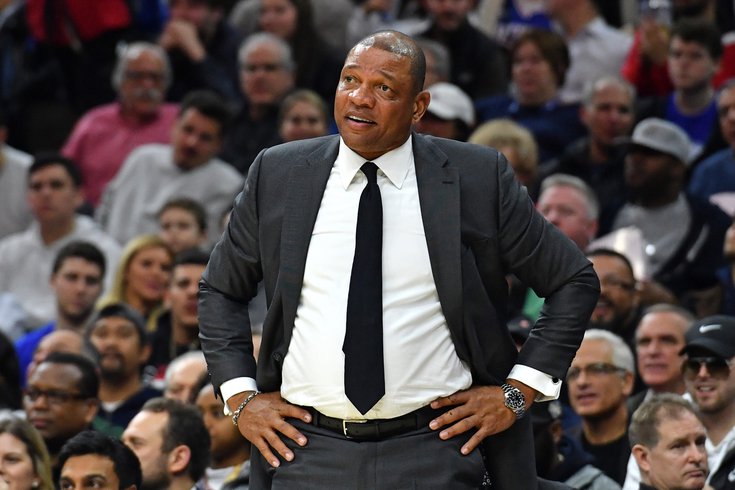 Nine days from their season opener against the Wizards, the starting lineup for the Sixers this season is just short of being carved in stone. Take the two stars, Tobias Harris, and the offseason trade acquisitions, and call Doc Rivers in the morning. The only drama left is the makeup of the second unit, and who will get the chance to mix in with that starting group once Rivers turns to the bench.

We got our first hint from the head coach on Monday, days after Dwight Howard spoke about who he'd been paired with at practice — a bit of a giveaway as the anchor of the Embiid-less lineups.

"I think obviously Shake and Furkan being together, I definitely want to see Tyrese a little bit with that group a little bit as well because of his ballhandling ability," Rivers said Monday. "Dakota Mathias and his ability to shoot. Mike Scott has had a phenomenal training camp — not a good one, a phenomenal one — so I'm real happy for him. I think he had a shot with me the first time and I think he knows what I'm looking for out of him, and you can say he's come in very comfortable, I would say would be the word."

While we've speculated some on the outlook of the rotation, it's about to become more real on Tuesday. Save for the early endorsement of Mathias, one of their two-way guys, there are no real upsets here. Can anyone find a way to squeak into the 10-man group of Embiid-Simmons-Harris-Green-Curry-Milton-Korkmaz-Howard-Thybulle-Scott?

The fan-favorite (and the most likely candidate to break through) is Tyrese Maxey, who missed the start of camp due to COVID precautions but has impressed since joining his teammates in Camden. Tasked with keeping up through Zoom sessions before arriving, the fighting spirit Maxey showed at the amateur level has continued to shine through during camp, with the head coach and other players taking a liking to the rookie so far.

"He was making plays offensively, his jump shot was...he was hitting threes, his defense was great. He's active, he's communicating, but the best thing about him is that he's willing to listen, willing to learn and ask questions. He's getting off to a great start, he's just got to keep that up and he'll be a great young player," Scott told reporters Monday. "I thought he was the MVP of today."

"I've always liked Kentucky guys early in their careers because I think [John Calipari] does a great job preparing them for how to play NBA basketball, just play basketball in general," Rivers added. "That's why a lot of those guys do well early right out of the gate. And you can see Max, defensively especially, knows how not to get picked, knows how to fight through picks, stays in front of the ball, talks on defense — for a rookie that's unheard of — and he's doing all of those things."

Maxey's future role, Rivers believes, is not one you can label with a pure "point guard" or "combo guard" label, a product of the system he intends to run this year. Without a true and traditional point guard, a la Rajon Rondo, Rivers wants to see his guys shifting in and out of responsibilities as the moment and lineup necessitates it, which will allow someone like Maxey to get reps in different floor spots and with different pieces around him as the season wears on.

That logic applies to the bench scorer role, too, with Rivers hesitating to name a true sixth man at this stage of the game. Accustomed to having guys like Jamal Crawford and Lou Williams on his bench, it's no surprise Rivers is waiting to anoint someone. But Milton appears to be far out in front there early, with Rivers excited to work with the guard who torched his Clippers on national TV early in 2020.

"Shake is going to be, he can be a starter or a sixth man," Rivers said Monday. "Shake is going to be a heck of a basketball player, he really is. You can just see it all over him. So with him and Furkan, with that type of firepower you can use off of the bench, man, that's going to make us pretty good."

For those keeping score at home, that's the second Korkmaz name drop of the day from Rivers. "Furky from Turkey wit da jerky," as Mike Scott once called him, appears to have gained the respect of his head coach rather quickly. Perhaps that shouldn't be a shock, given Rivers' affinity for movement shooters and his ability to coax value out of them, even young ones like former Sixers guard Landry Shamet.

The real mystery now is how Rivers will choose to sub it for Philadelphia, something that hinges on his star players as much as anything else. How much will the patterns change under Rivers compared to what they look like under Brett Brown? In L.A. last season, the Kawhi Leonard-Paul George combo played deeper into first and third quarters than Joel Embiid tends to.

A minute or two here or there doesn't sound like a big difference, but it has a domino effect for the rotation and the sort of looks you might see when the starters/closers are not on the floor together. That's a decision that may not totally be in his hands — the sports science department and Embiid himself will influence what the shifts look like for the big guy.

Tuesday will certainly have the trappings of a preseason game, right down to the non-existent crowd brought on by COVID-19 limitations, but there is some urgency for Philly to get things accomplished in a short amount of time. They have just two games before their real season opener, and for a team implementing new players on top of a new system, it's a lot to handle at once. Expect a healthy dose of the starters in the first 24 minutes of action before they give way to the bench.

• The Sixers waived Derrick Walton Jr. and Ryan Broekhoff on Monday, as Keith Pompey first reported, whittling the roster down closer to the 15-man group they'll have to start the season. These moves follow previous cuts for Lamine Diane and Justin Robinson, players on Exhibit 10 contracts who had to be waived in order to clear roster space ahead of the preseason.

(For those unaware, Exhibit 10 deals are signed in the first place to try to keep guys in the G-League as they compete financially with overseas deals. A player who signs an Exhibit 10 deal can receive up to a $50,000 bonus if he stays with the team's G-League affiliate for 60 days, though there is some doubt about the lure of these deals this year, with COVID-19 threatening to derail the G-League season.)

That leaves the Sixers with 16 rostered players and two players on two-way deals (Paul Reed, Dakota Mathias) heading down the final stretch of camp, so they only need to cut one more player to get down to the regular-season limit. There's also the possibility the Sixers could look to trade one of the players at the end of the roster, but they would need to find a taker for an end-of-bench guy like Vincent Poirier or Justin Anderson, the former of whom has a fully-guaranteed deal for this season.