Sixers' Dave Sholler giving back to A.C. Rescue Mission that helped his family in time of need 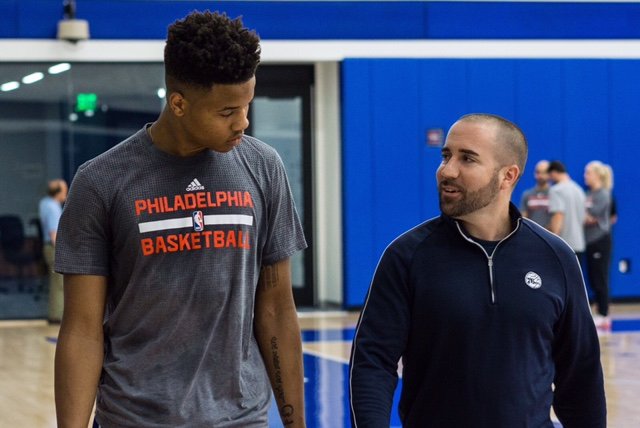 The narrow eight-foot long corridor of faded wood paneling and laminated grayish tiles served as the Spectrum and Veterans Stadium to the four of them. It was an imaginary world where the Phillies, Flyers, 76ers and Eagles always won.

It was where Dave Sholler and his three younger siblings could be Duce Staley or Randall Cunningham running for a touchdown, or Allen Iverson driving to the basket, or Eric Lindros scoring a goal.

The area, inside the tiny trailer on English Creek Road, in Egg Harbor Township, N.J., was where Sholler cultivated his love for the local teams.

It’s never lost on me that I’ve had some incredible people help me growing up, and have remained around me to this day.

Today, the 33-year-old is living his dream in a very prominent role with one of them. Sholler is currently the 76ers vice president of communications, a role he took over in November 2016 after almost eight years as the UFC’s senior vice president of public relations and athlete marketing and development.

Sholler grew up in a hardscrabble environment where he essentially raised his brothers Dan and Dennis (who are both PhDs) and sister Jillian (a college graduate) by himself in a trailer park. His father was addicted to opiates, his mother worked countless hours a week to pay the bills.

It was during that time Sholler learned an important lesson, one that has stuck with him to this day and continues to shape not only his view of the world at large, but also the role he, and those like him, can play.

“It’s never lost on me that I’ve had some incredible people help me growing up, and have remained around me to this day,” Sholler said. “Personally, with the Atlantic City Rescue Mission, when my father was out of options with rehab, out-patient, in-patient, you name it, types of recovery, he ended up at the rescue mission. The 76ers are so engaged in the community that we run a program called Project 76, where every Sixer employee is asked to perform 76 hours of community work — and it’s real work.

"It hits home for me. There was a time in my life when I got off the school bus at the trailer park and my house was surrounded by police officers, because my dad was being physically removed from the home. Out of options, he wound up at the Atlantic City Rescue Mission."

Sholler never forgot what the Atlantic City Rescue Mission meant to him as a child. What it provided to his father, and countless others in similar situations. And what it needs if it hopes to continue providing those services.

It's why on Thursday, August 10th, Sholler is hosting the Atlantic City Rescue Mission Summer Gala Fundraiser at the Claridge in Atlantic City, N.J. [More info below.]

Not only is the event closing in on a sellout, but it also got a big, unsolicited donation late Monday afternoon from a big name – and Sholler deserves at least some of the credit.

His commitment and influence to the A.C. Rescue Mission is so genuine that it prompted his former UFC boss, Dana White, to donate $10,000 – $5K from his own pocket and $5K from the UFC – during a radio interview, much to Sholler's surprise.

"He did it totally organically and spur of moment," Sholler said via text. "Incredible. [I] had to make sure I didn't cry on air."

Beyond just working for a team he grew up a fan of, this type of emotional connection to the community is what made the Egg Harbor High and Stockton University graduate want to come home.

It's why, last August, Sholler decided to give up a successful career in the UFC to work for the Sixers, who sat at the NBA bottom coming off a 10-72 season.

I didn’t want to sit down 15 years from now and go, ‘What if?’ The way life has unfolded for me, I want to swing the bat every chance I get.

What ultimately swayed Sholler to leave was that burning desire to return to his home — and a vision that began to unfold of standing on a flatbed truck rolling down Broad Street with millions of fans celebrating an NBA championship.

“I felt like I had accomplished everything that I ever dreamed of accomplishing at the UFC,” said Sholler, who interned with the 76ers in 2004. “I always wanted to be part of the Sixers organization again. What sold me was a personal connection and growing up with a strong passion for the 76ers. I firmly believed in the direction that they were heading. So when I had a chance to come out and meet with [Sixers CEO] Scott O’Neil and [general manager] Bryan Colangelo, I heard their vision for where they believed the Sixers were heading. As I sit here, we’re definitely on that path.”

The tangible effects came at that meeting with Colangelo and O'Neil, specifically during a tour of the team facilities.

A big tradition with the Sixers sales department is each time they make a big sale, they ring a bell and dunk on a mini-basket.

“I remember turning around and looking to Scott, and I said, ‘I feel like I’m in the Cavalier’s front office,’” Sholler recalled. “That was just after they won the championship. The energy, the enthusiasm; this unparalleled buy-in from everyone I had talked to believed in the vision of where this team was heading. Sitting down with Scott and Bryan for as long as I did, I truly believed in their vision.

“I keep going back to the moment when I told my grandfather when I was 15 that I was going to win a championship in Philadelphia. I didn’t want to sit down 15 years from now and go, ‘What if?’ The way life has unfolded for me, I want to swing the bat every chance I get. Most people in life spend their lives chasing one dream, I have a chance to chase two dreams. I have a chance to work for two remarkable people like Scott and Dana White, with the UFC. You run through walls for guys like that.” 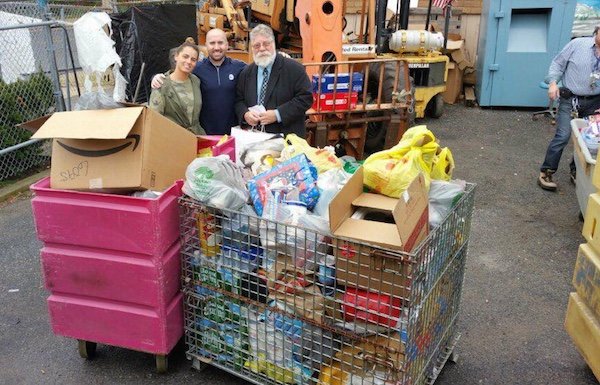 Sholler has never veered too far from his roots, or how rugged they are. He was afforded few opportunities to go to games as a kid. It’s why one of his lasting memories was his first Sixers’ game. Through a family friend, Dave’s family scored upper-level tickets to a Sixers game at the Spectrum.

Sholler was around seven. He remembers walking to the upper bowl and encountering a season-ticket salesman leaning against the tunnel area with a basketball in his hands. The salesman bounced the ball to Sholler as he entered the bowl. Dave caught the ball right where Charles Barkley’s autograph was. He went to throw the ball back—and the salesman told him to keep it.

To this day, it pains Sholler that he doesn’t have that ball.

That moment has stayed with me all of this time. When you think you have it tough, there are families that have it tougher. That gave me a level of perspective, and I wanted to do something for the rescue mission when I got home.

The Sixers are among the hottest teams in the NBA. They’re approaching 14,500 season tickets being sold. Sholler has latched on to a team on an upward arc — and he’s using his position and success to help those less fortunate.

It’s a vision Sholler has always held, ever since he was imitating Philly stars in his family trailer in South Jersey.

"We were down as a family back then," Sholler recalled. "And I’ll never forget this African-American woman around my mother’s age, standing there at the A.C. Rescue Mission with her three children — who were similar ages to us.

“The mother had this blue duffle bag and that’s all she had. That moment has stayed with me all of this time. When you think you have it tough, there are families that have it tougher. That gave me a level of perspective, and I wanted to do something for the rescue mission when I got home. They serve 700 meals a day — and good portion of them are homeless, addicted, jobless. They could have a dozen full families there. They serve 700 families a day off of one industrial oven on donations from area residents.

“I felt compelled to be a part of re-energizing my hometown and fight back. I want to give back. I remember where I came from. The power of people is very strong.”

NOTE: There is a dire need for cleaning products and hygiene products for the AC Rescue Mission supply drive.

Hosted by Dave Sholler at the Avalon Conference Room at the Claridge in Atlantic City, N.J.

Go to ACrescuemission.org for more details.