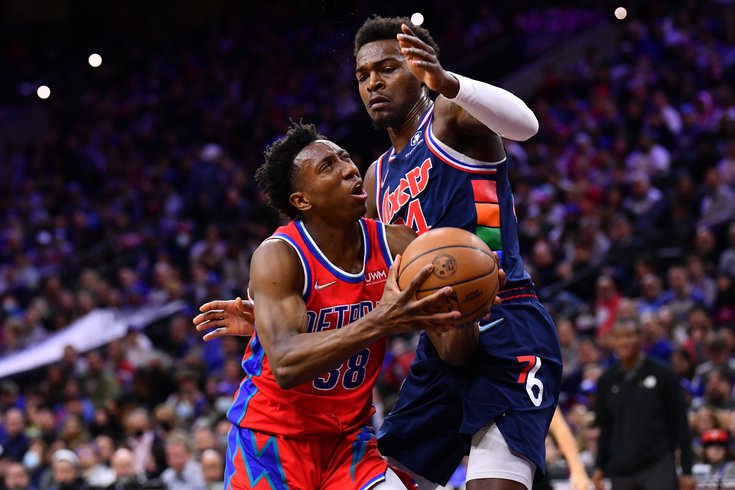 Sixers two-way guard Saben Lee during his time with the Pistons playing against Paul Reed.

The Sixers are signing Saben Lee to a two-way contract, as ESPN's Tim Bontemps first reported following Tuesday's win over the Brooklyn Nets. Philadelphia will waive Michael Foster Jr. to clear the two-way slot up for Lee. While assessing the Sixers' health situation earlier this week, we indicated in this space that Philadelphia's most likely roster move was a hard look at their two-way spots, and Lee ends up being the man who steps in for Philadelphia.

In the third year of his NBA journey, Lee has already touched three different organizations, drafted 38th overall by the Utah Jazz in 2020 before being dealt to the Pistons and signing a two-way contract for Detroit. Lee ended up playing a fairly significant role for the Pistons over the last two seasons, averaging a shade over 16 minutes per night and appearing in roughly half of Detroit's NBA games over that time. After moving back to the Jazz in the Kelly Olynyk/Bojan Bogdanovic trade this September, Lee was waived and subsequently picked up by the Toronto 905, the G-League affiliate of the Raptors, where he has spent his 2022-23 season to date.

Lee's time with the Pistons mirrored a lot of what we saw from Lee at Vanderbilt, where he spent three seasons before making the leap to the league. Ball in his hands, Lee is a threat to score and put pressure on your team's interior, particularly as a foul drawer. Lee's speed and athleticism, in addition to his footwork and ability to mix up paces, can put defenders in tough spots inside the arc, provided he's able to make them respect his jumper enough to play up on him in the first place.

The trouble for Lee is that his inconsistency as an outside shooter has made it hard to rely on him as a regular NBA contributor so far, especially as an off-ball player. Lee has connected on just 26.5 percent of his attempts from deep at the NBA level, and it's hard to glean much from his time in the G-League given the limited sample size.

Swapping out two-way guys is understandable in the spot they're in — Philadelphia is in desperate need of any guard help they can get, and Lee can fill in for spot minutes while they wait to get their reinforcements in the weeks to come. Unlike Foster, Lee has already had some moments as an NBA rotation player, requiring less time and development before he can actually fill a role. Like any two-way guy, limit your expectations on upside, but there are worse bets to make than one on a 23-year-old who has already had some success scoring and creating at this level.

And he'll certainly be ready for whatever role the Sixers throw at him from a fitness standpoint. Lee is averaging nearly 34 minutes a night in the G-League this season, having played 40 minutes in his final game with the 905 earlier this week. Lee will likely be an afterthought on most nights, someone you basically hope doesn't have to see the floor if things are going well, but he should be ready to step in and play if Doc Rivers calls his number. In the circumstances, that's about all the Sixers can hope for.