Now that he's signed, Saric ready to help Sixers in any way possible 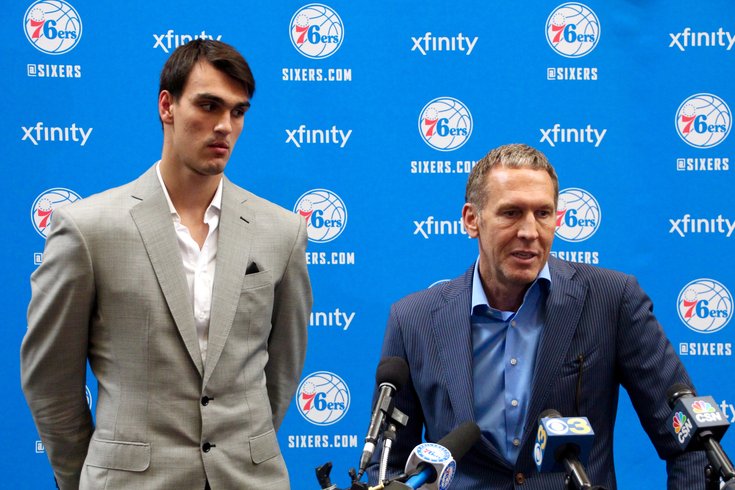 It’s official. Croatian forward Dario Saric, the 12th pick in the 2014 NBA Draft, has signed with the Sixers.

General manager Bryan Colangelo announced the highly anticipated signing during a press conference at their Navy Yard offices in South Philadelphia late Friday afternoon. As per team policy, the terms of the deal were not disclosed. Per the rookie scale, Saric was likely signed for four years and a little north of $10 million.

Considering he's joining a team that finished one loss shy of tying the NBA record for most in a single season, Saric sounded genuinely excited about joining the team and putting his game to the test against the best players in the world on a nightly basis.

The theme of Friday's presser was growth. Not just how Saric has grown as a player, but also how he's grown as a man -- not to mention his growing relationship head coach Brett Brown and his new Sixers teammates.

Since being drafted by the Magic — and ultimately traded to the Sixers on draft night — the 22-year-old has been playing Euroleague ball in Turkey, and many thought he would stay overseas to play out the final year of his contract, one that would certainly be more lucrative than a rookie deal in the NBA.

Further complicating the situation was the fact that Saric had to pay $450,000 of his $1.1 million buyout — the Sixers were only allowed to pay $650k of it.

"This process of drafting Dario Saric and him ultimately signing a contract has been, obviously, much anticipated," Colangelo said. "And we have all been eager to have him join the team. There's been a lot of talk and speculation about when, where and how this was going to happen, but I will say that it's official. He has signed his contract. We're very excited to announce that today and I'd like to welcome Dario to Philadelphia."

After landing in Philly on Thursday, Saric said that he decided to take the short-term financial hit because he wanted to keep his promise to the Sixers -- after the draft, Saric said he would join the Sixers after spending two seasons in Turkey.

Despite the recent political turmoil in that country -- turmoil that boiled over into an all-out political coup on Friday -- Saric said that the timing of his deal with the Sixers was a basketball decision.

"This timing was just about basketball and not about the situation in Turkey," he said. "Because I lived there for two years and was with those people every day, I am very sorry to see what's happening in Turkey. But the only reason why I'm [in Philadelphia] is basketball."

My position is what coach says [it is]. ... in Europe, most of the time I played the four, a couple of games I played the three, but I think I can help at both positions.

To Colangelo, who had already been impressed by his on-court development, his desire to follow through on his promise to join the Sixers was a sign that the young Croatian had grown as a person as well.

"I want to also just point out that when you talk about young men, you talk about what they're made of, both emotionally and basketball-wise, everything," Colangelo added. "We know what he [Saric] is basketball-wise. He's a well-rounded player; he's really coming into his own at the age of 22. I first saw Dario when he was probably 17 or 18 years old and I can tell you how far he's come as a player. Physically, he's also come a long way, but his game has just really advanced to a level that we're all excited to see how it's going to fit and translate at this level.

"But also, just as a young man, you're talking about a mature young man at 22 who has been through a lot, who has played years of professional basketball. That's going to bode well for him in terms of his transition. But also his integrity. When he said he was going to come here in two years, and when he told us just within the last couple of weeks -- he told Brett Brown, 'Coach, I will be there. I will sign that contract.' And here he is today. There were a lot of unknowns as to whether or not it would all take place, but it did. And once again, we're just excited and thrilled to have him here."

But that’s in the past. Saric is a Sixer.

And now that he is, it will be interesting to see where the 6-foot-10, 220-pounder fits in Brown's rotation. Saric has played primarily power forward in his career, but with Nerlens Noel, Jahlil Okafor and the expected debut of Joel Embiid, he may be used more as a small forward.

"My position is what coach says [it is]," Saric said with a laugh. "It's a simple answer, but if you're asking my opinion, in Europe, most of the time I played the four, a couple of games I played the three, but I think I can help at both positions. I think I can post up some players at the four. Make spacing on offense for other players to be able to play one-on-one, but we'll see because I just got here."

Saying that he'll play wherever he's needed may seem like lip-service, but not when you consider the fact that he talks to his new coach more often than most people speak to their families.

"We didn't just talk about Philadelphia and whether or not I would come here," Saric said of his phone conversations with Brown, which occur as often as three or four times per week. "We talked about all life, about players and I was in touch all the time with him. I think he's a great person and a great coach. And he will improve my game and the game of the whole team."

I was surprised by [how closely Sixers fans were following me]. I didn't know that would happen, that people would welcome me in that way, but I'm very happy because of it.

He isn't the only Sixers rookie coming in with a previous relationship with Brown. The same can be said for first-overall pick Ben Simmons, whose father played for Brown in when he was an assistant in Australia.

Saric also sees some similarities on the court.

"If you have five players who can run and feel each other on the court, I don't think it matters what position you play. It's more about how you play and how you help each other during the game. And I think we'll make good things [happen]. Not just me and Ben, but I think the whole team."

Because Simmons and Embiid will also be making their NBA debuts for the Sixers this fall, Saric may not face the same kind of pressure he would have in past seasons, especially since fans have been waiting for him to arrive for two-plus years (just like Embiid).

But Saric doesn't view it that way, not after finding out how closely Sixers fans have been tracking his progress (and trans-Atlantic flights). And definitely not after seeing the crowd that was waiting for him to land at Philadelphia International Airport on Thursday.

"I was surprised by [how closely Sixers fans were following me]," Saric said. "I didn't know that would happen, that people would welcome me in that way, but I'm very happy because of it. Of course, that means the stone* on my back may be [a little heavier], like 'You must do something.' I'll try to put that on the side and focus on my game. ...  But I'm happy because the city is happy that I'm here."

Saric isn't yet sure when he'll be joining the Sixers for good, but that likely won't be until a little closer to the season. He will head back to Croatia tomorrow and then to Rio to compete for his home country at the Summer Olympics. After that, he'd like to take a little time off after what he described as "a busy summer."

Maybe it's time for his first introduction to the Jersey Shore.