P.J. Tucker is expected to sign a three-year deal for the full mid-level, a source confirmed to PhillyVoice on Thursday. Shams Charania was the first to report the news.

This has been, almost unquestionably, the worst-kept secret of the offseason so far. Reporters from various outlets around the country have been connecting Tucker to the Sixers for weeks, and even when the money didn’t appear to make much sense, those whispers continued.

If you watched Philadelphia’s second-round series against Miami this spring, you know exactly what P.J. Tucker brings to the table. There has been a lot of talk about the Sixers needing players with a “dog mentality” or some other cliche, and few players represent that better than Tucker. Trying to sum up his contribution to a basketball team with statistical factoids strips away what he brings to the table — a consistent physical presence, a fearless demeanor, and a willingness (even a desire) to do the dirty work necessary to win.

Often, that has been Tucker needing to take the top defensive assignment in high-stakes situations, a task that has left him on the receiving end of some nuclear scoring efforts from all-time greats. If you’ll forgive me for including this in the middle of a serious analysis and reporting post, one of the all-time great NBA memes concerns Tucker and his inability to stop LeBron James at the peak of his powers. 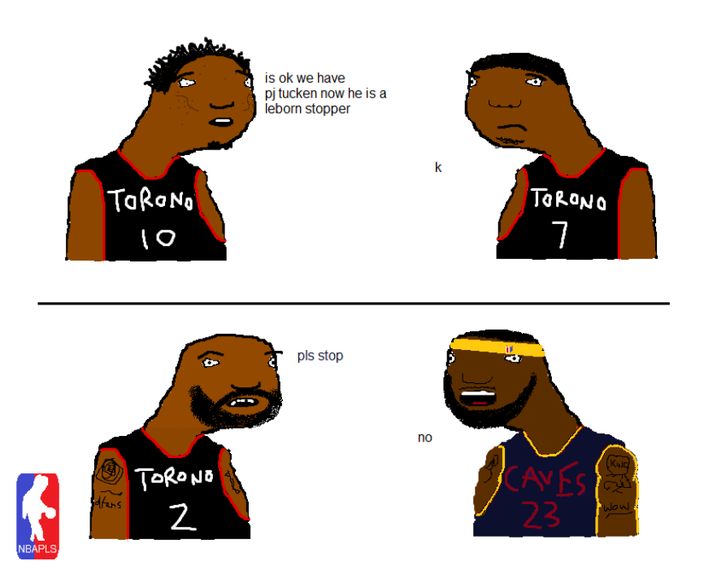 But you’re not bringing Tucker into the fold because you believe he can shut down the elite players of the NBA. You bring in Tucker because even at 37, he will relish that assignment, he will get in that guy’s face, and he will use every trick in the book to try to throw them off of their game. If it requires going over the line, trash talking, or trying to drag an opponent into a confrontation that becomes less about basketball than manhood, he will do it. He is a prototypical guy that teams hate playing against and love having on their team.

On the offensive end, Tucker has more than proven he can carve out a useful role on a team led by James Harden. He was the league leader in corner threes made in every full season that he played with Harden in Houston. Tucker has been an above-average shooter for his career, and the shot Harden lives to create has been a constant source of success for Tucker, with and without Harden there to create them.

Philadelphia's push to sign Tucker are not all about what he accomplished with his former running mate in Houston, or even Daryl Morey's desire to bring together the pieces of those teams who could not get over the hump. Joel Embiid was a factor in the Sixers going after and ultimately getting Tucker, an effort that started in earnest when Embiid sat at the podium following their Game 6 loss and sang Tucker's praises to the media.

"When you have size and toughness, that goes a long way. You look at someone like PJ Tucker, great player, but it's not about him knocking down shots, it's about what he does, whether it's on the defensive end or rebounding the ball," Embiid said. "Defensively, plays with so much energy, believes that he can get from point A to point B, and he believes that no can beat him, and he's tough. He's just physical and he's tough, and they have a few of those guys."

"Since I've been here, I'd be lying if I said we've had those type of guys. Nothing against what we have, it's just the truth. We never have PJ Tucker, that's really what I'm trying to say. I think physicality, once you get to the playoffs or the later rounds, you need that, you need those guys that are really tough."

Now, the Sixers went and got Tucker specifically, not needing to settle for a bargain bin version of him or a guy who might one day turn into Tucker. A role player who has consistently been a part of winning teams, earned the stamp of approval from their franchise player, and has a run of success with the second star? That sounds like a winning formula on paper.

The obvious concerns with Tucker all concern his age. Though the money matters insofar as it could have been spent on another player for the full mid-level, the real issue is whether you can put your faith in a 37-year old player to hold up physically in the years to come. Though NBA players are sustaining success longer than ever these days, a physical grinder like Tucker dealing with any noticeable slippage will have a pronounced impact on his value. And the sort of players succeeding deep into their 30s have very rarely been role-player types that simply sustained their careers — the guys who make it this long are often stars who have enough talent to either outrun long odds or at least transition into smaller roles.

If there is any solace for Sixers fans looking at his age and fearing the worst, it's that Philadelphia's other signings have all been pointed in a similar direction — getting bigger, more athletic, and more defensive-minded on the whole. Were Tucker the only acquisition of the offseason, there would be real questions about how much they were putting on his plate at his advanced (for the NBA) age, but between the Tucker signing, Melton trade, and House acquisition, the Sixers have added to their steel across the board. If Matisse Thybulle sticks around — the Sixers have insisted they're not going to move him unless they get value back for him — Philadelphia suddenly has far more defensive versatility to deal with wings than they've had in years.

There's every reason to hold your breath and get nervous about how Tucker holds up over the life of this deal. But if he can continue to do the things he has done everywhere else up to this point, he will be an impactful addition that plays his way into the hearts of Philly fans fairly quickly.