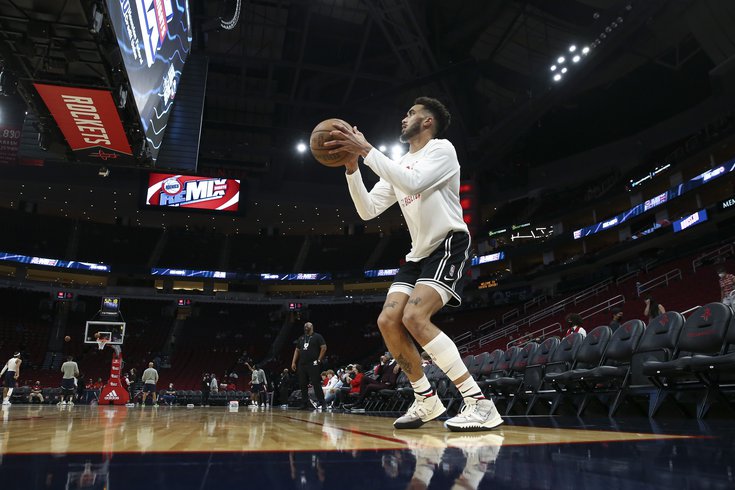 The Sixers are signing Trevelin Queen to a non-guaranteed contract with a partial guarantee in year one, a source told PhillyVoice on Thursday evening. Derek Bodner of the Daily Six reports that Queen's partial guarantee is for 300k.

Queen's road to the NBA has been unorthodox to say the least. Queen finished his high school career with no college offers thanks to a chaotic series of moves around the country. Growing up in Maryland, Queen was not able to play basketball his junior year after moving to Florida as a result of the timing of his transfer. He would move again prior to his senior season, playing just nine games for his hometown high school in Maryland. He went through a series of junior colleges to open his career, and then nearly became a teammate of Charles Bassey's at Western Kentucky before transferring again, finally landing with New Mexico State.

Those two seasons at New Mexico State, one shut down by the COVID-19 pandemic, showed what Queen might be capable of. Prior to the season being shut down, Queen showed off a fascinating mix of skills that most teams would love to have at the pro level, flashing the ability to shoot off of movement, open-court playmaking, and solid instincts as a team defender, and decent size (6'6") to boot. But without much in the way of tape to show teams, Queen was forced to take the path through the G League first, spending most of the last two seasons with the Rio Grande Valley Vipers. This past season, Queen was named the G League's Most Valuable Player and Finals MVP en route to the Valley Vipers winning the title, posting a 25.3/6.7/5.2 line to lead the way for Rio Grande.

Few young players have had the experiences Queen has gone through just to arrive here. Let Queen describe for you himself the settings he lived in as he made his way through the amateur ranks, looking for a place to prove himself:

I was homeless, kicked out, hungry. I didn’t know what was next. When I was in California, there were 15 of us from rougher areas in Detroit, Baltimore and Chicago. We were in a retirement home and it was so small that if I farted, the neighbors could hear it. We had two bedrooms and nine air mattresses. We all got kicked out. Three teammates and I – and I had just met these kids two or three weeks prior – moved to East Oakland in a 1982 Delta on Bancroff Avenue. We were all like 6-foot-2, 6-foot-4, 250 pounds. We had all our clothes in the backseat. You put us in there and the gasoline starts to leak and to get to our school was 45 minutes. And gas in California isn’t cheap. Every time gas started to leak, we had to pull over on the side of the road and fill it back up manually.

The first week, we were living in the Delta. My teammate didn’t know that he had some family in East Oakland. His mom told him to go there. We were living in the car three streets down from his mom. So us four went there and they already had like eight people living in there. We had to shower with slides on. No towels, nothing to eat. There were shootouts every day. I was living on an air mattress with a hole in it. But that gave me so much strength, too. I went through all that. This was before Cash App or Venmo, so I went to the Western Union to get money but I was damn near scared to walk by myself. It was so hard. I was always questioning myself, but I stayed positive. [Hoops Hype]

None of that, obviously, will ultimately decide whether Queen has the chops to stick in the league and become an NBA player. But he has a shot to compete for a spot on Philadelphia's roster at the very least, and that has to be hard to fathom for a kid who would have probably found it remarkable to be anywhere close to NBA radar five years ago.

And before anyone starts preparing their "Rockets East" jokes and complaints, it is worth noting that Morey was gone from the organization before Queen was acquired by the Rockets. So while he may have been on a two-way deal for Houston this past season, and it's really rather funny that it turned out this way, this isn't exactly a "getting the gang back together" move. It is, as far as I understand it, an opportunity for a resilient kid to battle for a place on an NBA roster.