Philly hoping to break trend of road shooting woes in Game 5 vs. Heat 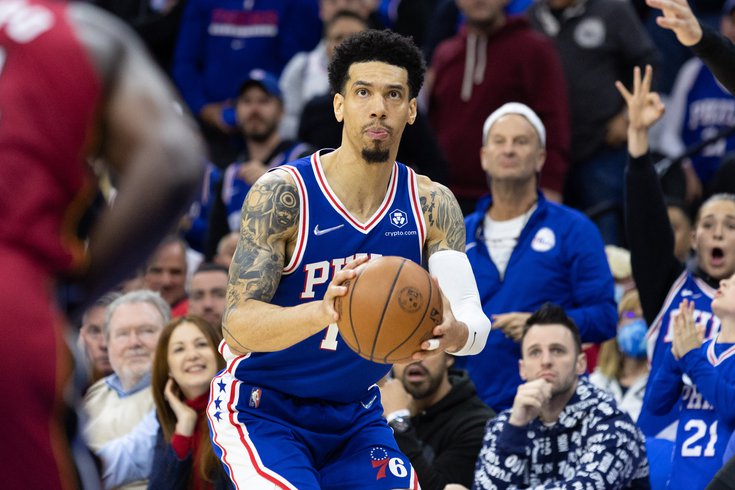 Danny Green spots up to shoot for the Sixers.

MIAMI — Any analysis of the second-round battle between the Sixers and Heat starts with the most basic observation of all. Road teams have shot like crap in every game this series, role players struggling to build any sort of rhythm away from their home arenas. Winning this series may very well come down to being the first team to come up with a passable effort from three in a hostile building before the seventh game ends.

The Sixers are hoping that Tuesday's Game 5 is their night to flip the script.

"You better make some shots, I don't really know if there's a thing that we could do better," Georges Niang said at shootaround Tuesday. "Obviously, with Joel here when we didn't have him the first two games, just having him on the floor creates open shots for other guys. When you're taking open shots rather than contested ones, they tend to go in a little more."

At this point in the series, all parties have essentially acknowledged the old belief that role players play and shoot better at home than they do on the road, though no one has offered a concrete explanation for why. Tyrese Maxey acknowledged some of the factors that change — sight lines and "backgrounds" and the comfort of a familiar rim — but ultimately assured reporters none of those were good enough excuses for shooting variance on the road.

If the Sixers are hopeful of their ability to steal one in hostile territory for Game 5, a look back at the game state of the series opener is instructive. They would end up losing that game by 14 points thanks to a strong Tyler Herro performance off of the bench, but they were able to keep Miami down from deep, forcing them into a 9/36 three-point night only slightly better than Philly's horror show. With Embiid on the floor instead of DeAndre Jordan, who has all but evaporated from this series, perhaps the Sixers find a way to win that sort of game even if their own outside shooting is dreadful.

One of the big variables of Game 5 is a subplot that has been discussed throughout the series — where art thou, Duncan Robinson? Miami's well-paid marksman has been a complete no-show, something that has not gone unnoticed by his representation:

Though that's an admittedly hilarious period of time to use as your evidence (I don't think I've ever measured anything in a 19-month window), there's plenty of merit to the idea of playing Robinson. He's a deadeye shooter when he has it going, and his ability to shoot off of movement is a point of distinction from most of the other guys in Miami's current rotation.

Doc Rivers and the Sixers, however, don't see the introduction of Robinson as a big variable or a change they're unprepared for should Erik Spoelstra decide to finally bring him into the mix.

"We prepare for it, but if he does he does. We prepared for it last game," Rivers said. "He may or may not, I don't know, but we just have to prepare for anything."

"Because he's just another shooter, so for us, it doesn't change the way we guard anyone... we're scared of [Max] Strus and all of those guys too. So it just adds another shooter on the floor."

Philadelphia's approach to guarding shooters in this series, mind you, has been one of the differentiating factors in approach from the two sides.

On one side, the Heat are committing an abundance of players/resources toward the middle of the floor, hoping they can stop entry passes to Joel Embiid and close off paths to the rim for James Harden. In the case of the former, they've been successful at minimizing his post touches, though it's been tougher to wall off Harden now that Embiid is back in the mix. If Miami is going to live with anything, it's Philadelphia's other guys hurting them from deep, which is why their success from outside has been such a critical feature of each win and loss.

By comparison, the Sixers are hugging shooters as tight as they can and trying to make Miami beat them man-on-man inside the arc. That's a task Jimmy Butler is well-suited for, but the philosophy is pretty straightforward — if you minimize Butler's playmaking opportunities and his individual success rate drops as a scorer, you might be able to choke out their offense entirely. Easier said than done, obviously, especially with Butler in the mood he's in at the moment.

Dealing with Butler on switches is a subject that Embiid touched on following Sunday night's win back home in Philadelphia, noting that he wasn't satisfied with the overall approach as a group. And from the sound of things, the Sixers are content trusting Embiid in that matchup if and when he gets it, which (in theory) allows everyone else to stay committed to their goal of protecting against open threes elsewhere.

"We're making it too easy for him," Embiid said Sunday. "You look at the way they guard me or they guard James, it's hard for me to catch the ball. They're making sure I don't catch the ball. And when [James] is driving, having the ball at the top, he's seeing a bunch of bodies. We got to do a better job of showing a crowd so he doesn't get it as easy as he's been able to."

"We're not going to have Joel locking and trailing," Rivers added at shootaround Tuesday, "and he's not going to catch and shoot. So we don't mind Joel guarding Jimmy at all, we believe Joel can guard about anybody. What we don't want to do is overuse Joel, because we need him on the other end."

Slow down Butler, and perhaps the shooting won't matter. But until Philly proves they can do that, the old "just make shots" factor looms large in their quest to take the lead in this series.

Tyrese Maxey, on the postgame process of winding down: "As soon as the game is over, home game I can go home and be with my dog, so that's great. Away games, my mom and dad were here last two times and they're not here this time, but I can go home and call them, call family members, call friends. 'Doctor Strange,' I can't go see it yet because I'm in the playoffs, but that's okay. But yeah, I do different things like that to put my mind at ease after games."

I feel you, Tyrese. Hobbies and Marvel movie outings get put to the side during this time of year.

I made fun of Miami for having this insane list of questionable guys before last game, and then they went and ruled Dedmon out with an illness before the game, so I suppose I have to give them some benefit of the doubt this time around.

Based on how Lowry looked the last two games and what the Heat said immediately after Game 4, this might be a situation like the first round where Miami actually benefits from sitting him in Game 5. A compromised Lowry isn't doing a whole lot to help them at the moment, either as an offensive engine or defensive chess piece, save for some stand-up possessions in the post against Tobias Harris. On paper, they will be replacing him with "worse" players, and they're demanding a lot from guys like Gabe Vincent in this spot, but the Heat have shown time and time again that they embrace the next man up mentality, with a talent ID and development program to match that philosophy.

The interesting thing to me is whether the Heat decide to lean into Butler basically playing point guard as a result of Lowry's injury, since he's the critical piece in a lot of their actions right now anyway. Treat him that way, and you can potentially throw some looks at the Sixers they haven't seen yet, including any with Robinson on the floor. Stay tuned.

Put it this way, I would say I am not the world's biggest Kane Fitzgerald booster.