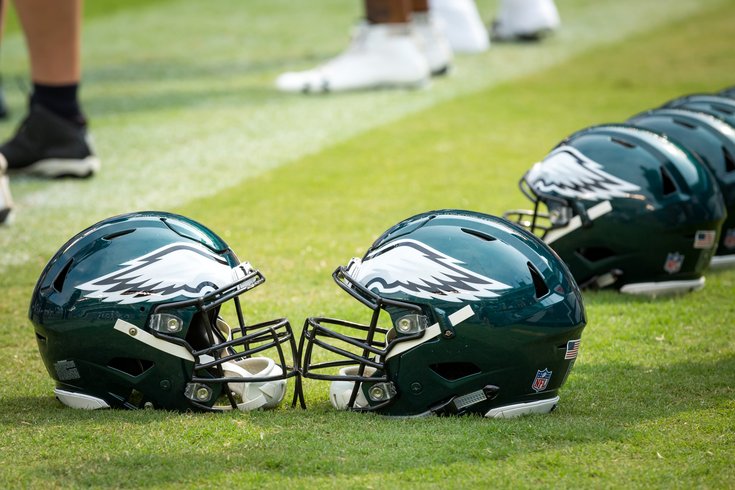 Eagles helmets at Lincoln Financial Field during the Eagles public practice on August 11.

With the start of the NFL regular season still a week away, here's a look at some season-long predictions, as well as some college picks.

First, however, we'll start with the Eagles' season opener against the Falcons, since that game will already have been played by the time next week's column is published. Let's turn it over to The Philly Godfather...

The Line: Eagles minus-3

What is the line telling you: Atlanta should win the game outright. You have Carson Wentz playing what essentially will be a half a game here, because he’ll need time to catch up to game speed. Plus, he has limited options and limited weapons. The Eagle haven’t been in sync on the offensive side of the ball yet — and Atlanta has revenge on their mind. I think the Eagles start 0-1 this season.

Bottom line: The smart money going is on Atlanta at plus-4 and plus-3.5.

What is the line telling you: The Eagles are probably going to be an underdog in only one or two games all season. Even though the Eagles’ SOS (strength-of-schedule) has the Eagles at No. 19 overall in the NFL, in my opinion, it’s a schedule that is a lot tougher than it looks. The Eagles started as a four-point favorite, and immediately, the sharp money bought up all of the plus-4 on Atlanta, regardless of all the rumors that Carson Wentz will play in Week One. Other than the Colts, the Eagles will be favored by three or less in the first six games of the year.

The middle of the schedule sees the Eagles playing the Jaguars and Saints away, and three of the last four games will be on the road. I’m not saying the Eagles can’t win the division, but anyone who is willing to lay minus-185 to minus-200, depending on where you shop, must have forgotten the fact that in the last 10 years each NFC East team has finished first in the division twice, and no team has repeated as NFC East champions since Eagles did it in 2003 and 2004.

I can’t see the Eagles going 5-1 in the division again, plus the Eagles play seven playoff teams from the previous year. My heart hates me for this wager.

Bottom line: The smart money is going on the under.

What is the line telling you: The Cowboys have issues with center Travis Frederick’s health, and guard Zack Martin is also hurt.

Bottom line: The smart money is going on the under.

What is the line telling you: This is an upgraded team and Saquon Barkley is going to take a lot of pressure off Eli Manning.

What is the line telling you: The Redskins’ defense is better than most people think. They have a great pass rush and they were decimated by injuries last year, and Alex Smith doesn’t turn the ball over.

What is the line telling you: They have a great defense.

What is the line telling you: The Packers strength of schedule appears the hardest in the NFL, but when you start dissecting it, it’s probably going to be the easiest road to the Super Bowl by any NFC team. The Packers will be favored in their first six games of the season. They’ll be favored in 13 of their 16 games this year. They play three of their first four games at home. Any team starting 3-0 has made the playoffs 75% of the time. They also play three games in December at home in Lambeau Field. Aaron Rodgers just happens to be 15-0 playing at home in December.

Bottom line: The smart money is going in that direction.

Rookie of the Year: Sam Darnold, NYJ: less than 2-to-1