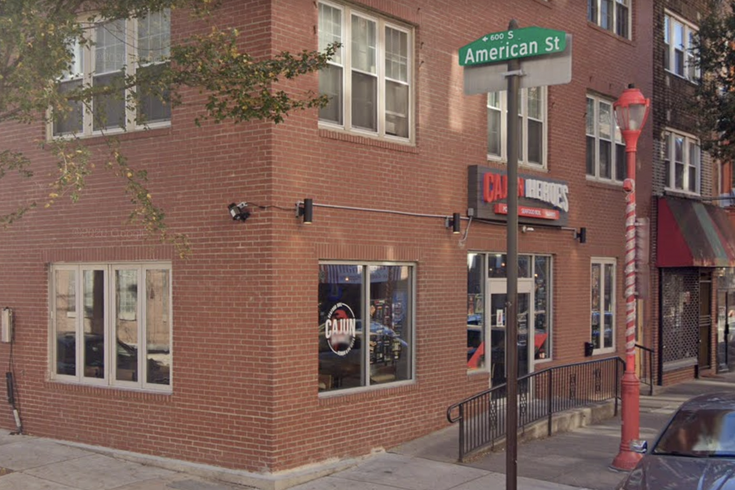 Three people were killed and 11 were injured during a mass shooting on South Street in Philadelphia on Saturday night. One alleged shooter was shot by police before dropping his weapon and running down the 600 block of American Street, above.

Two men are in police custody and facing charges for their alleged roles in last weekend's mass shooting on South Street, which killed 3 people and wounded 11 others, authorities said. The second man, who was arrested Monday night, was not immediately named as police continue to piece together an investigation involving multiple gunmen.

The first man taken into custody was identified Monday afternoon as 18-year-old Quran Garner, who is charged with aggravated assault and weapons offenses in a non-fatal shooting. Garner was one of several men allegedly involved in a confrontation that was captured on surveillance video, before a hail of gunfire broke out near Third and South streets around 11:30 on Saturday night.

The second suspect was arrested by the U.S. Marshal's Service, police said. Additional details will be released once the suspect has been formally charged.

"There is still more work to do," Philadelphia police Commissioner Danielle Outlaw said Monday night. "The PPD will continue to work with all of our law enforcement and community partners to identify and apprehend each and every individual responsible for these heinous crimes."

Garner allegedly fired several shots on South Street before Philadelphia police returned fire at him. He was struck in the hand and dropped a weapon with an extended magazine that was recovered by authorities at the scene, police said. Garner was at Thomas Jefferson University Hospital on Monday after undergoing surgery for his injuries.

Updates in the investigation were provided by the Philadelphia District Attorney's office during a news briefing Monday afternoon. The D.A.'s office had said an unnamed person remained wanted by police thus far in the investigation, in addition to Garner, and said a warrant had been issued for that individual's arrest earlier Monday. That person will face charges of attempted murder, aggravated assault, conspiracy and related offenses.

The conflict that led to the shooting centers on at least three people who have been publicly identified at this time, investigators said. A brief video segment of the initial fight has been circulating on social media, allegedly showing Gregory Jackson, one of the people killed in the shooting, remove a firearm and hold it at his side before the ensuing gunfire.

Police continue to review vast amounts of surveillance footage from the area of the shooting.

Micah Townes, one of the men injured in Saturday's shooting, had been walking along South Street in close proximity to Garner when they encountered three other men, including Jackson, investigators said. Words were exchanged between Townes and the other men, prompting Jackson to punch Townes in the face, video evidence showed.

Soon after, another unnamed man entered the fight and briefly pushed Townes up against a window to beat him, police said.

Both Jackson and Townes had permits to carry firearms. There were 17 shots fired between them, Assistant District Attorney Joanne Pescatore said. Prosecutors described Townes as a victim who was defending himself. He is not facing charges.

Authorities have not yet determined what led to the initial disagreement on South Street.

Micah Townes, Gregory Jackson and the unnamed man all are connected to boxing in Philadelphia, Pescatore said.

"I don't know if they had some sort of relationship prior to that," Pescatore said. "You just see them pass each other on the sidewalk, words are exchanged and then everything breaks out from there."

Jackson was a boxer and trainer based in Philadelphia. Better known by his ring name "Japan," Jackson was known to teach children about boxing and self-defense. His Instagram account features photos and videos of him coaching boxers at Pivot Boxing Academy in Fairhill.

“Japan” Greg Jackson was killed in the shooting last night in #Philadelphia. A father and boxer, he ran boxing programs for kids in the city. pic.twitter.com/LAiscR75Fe

After the initial fight and crossfire, Quran Garner allegedly began firing shots down South Street in the direction where the first shots had been fired. He then turned and fired shots at responding Philadelphia police officers, prosecutors said. An officer fired back at Garner, who was struck in the hand and fled down the 600 block of American Street, police said. Pescatore said Garner was wearing a face covering at the time of the shooting.

Garner encountered police again at 4th and Bainbridge streets, where there had been another shooting earlier in the night, and told officers he had been hurt in the South Street shooting. He was taken to the hospital.

At this time, authorities do not have evidence linking the South Street incident to the shooting at 4th and Bainbridge streets, Pescatore said.

Garner allegedly did not have a license to carry a firearm and had been using a ghost gun that was assembled from a kit, according to prosecutors.

It's believed that Garner opened fire on South Street to retaliate for the shooting of Townes.

"That is the belief, except that Mr. Jackson was already down and that particular incident was clearly over," Pescatore said. "Probably 20 to 30 seconds (passed) when Quran Garner begins to fire down that street."

In addition to Jackson, the two other people killed during the mass shooting on South Street have been identified as Kristopher Minners, 22, and Alexis Quinn, 27. Eleven other people, mostly innocent bystanders, were injured in the shooting, police said.

The crime scene covers about a two-block radius that works its way east down South Street to American Street. Numerous surveillance videos have been supplied to police by local businesses to help investigators reconstruct the sequence of events on Saturday night and identify those involved.

The man accused of shooting Townes left the scene after the initial gunfire, prosecutors said. A third man, who was with Jackson, remained at the scene to render aid to Jackson and gave his information to responding officers.

Investigators have recovered four guns from the scene at this time, including three 9mm handguns and a 40-caliber pistol, Pescatore said.

Ballistics evidence from the scene is still being reviewed in conjunction with surveillance video to determine who was responsible for the gunshots that struck innocent bystanders on Saturday night. Investigators confirmed there is video of evidence of a fourth shooter, but declined to disclose where that person fired shots.

No murder charges have been filed at this time and there have been no further updates on the status of the shooting victims.

It remains unclear whether extended surveillance video footage from the shooting will be released to the public to potentially aid in the investigation, which continues to evolve by the hour, Krasner said.

"I went to the scene myself the morning after the shooting to see what was there, and it was chilling," Krasner said earlier Monday. "No less chilling that it happened in more than 10 places around the country over a space of a few days. It is enough. We have come to the point where it is enough."

One of the victims killed in the shooting, Kristopher Minners, was a resident advisor at Girard College in North Philadelphia, according to a statement released by the American Federation of Teachers.

Our statement on last night's mass shooting in Philadelphia: pic.twitter.com/v5gAR5S83z

"Our hearts are broken for Kristopher and his family, and our thoughts are with everyone who was impacted by this appalling act of violence," Turner wrote Sunday in a letter to the Girard College community. "I visited with Kris' parents this morning and the College will continue to offer them every support.

"Kristopher was proud to return to Girard and serve as a role model to the young boys in his care. He was doing an amazing job for us, even being named RA of the month in March. Kris was a vital member of our community, and his loss will be felt deeply."

Girard College will have social workers, behavioral specialists and psychologist on hand to support students as they grieve his loss, Turner said.

The AFT also called for elected officials to strengthen gun laws, saying Minners' death is a reminder that gun violence can touch anyone.

"Mass shootings are a daily occurrence in only one, wealthy peacetime country on Earth," the AFT said. "Petty disagreements turn deadly even for innocent bystanders. It doesn't have to be this way."

Family members and friends of Quinn also mourned her death on social media.

"My heart goes out to the Quinn family," wrote Mieshia Quick, who described herself as Quinn's aunt. "You (Quinn's mother) and your family have my deepest condolences, that was my little niece. Alexis aka your little twin is gone but will never be forgotten. The shooting and killing has to stop. That could have been my daughter, she was down there at the same time it happened. We need to do better. Please!! Please!! Put the guns down, the city of Philadelphia is a danger zone."

"While many of us were out enjoying the beautiful day in the city, horrendous and unthinkable acts happened in a very popular local and tourist hangout," she said.

The wounded people ranged in age from 17 to 69. Some of them remained in critical condition Sunday, Outlaw said.

Anyone with information about the South Street shooting is encouraged to call the Philadelphia Police Department's tip line at (215) 686-8477. There is a rolling $20,000 reward for anyone who provides information leading to an arrest.