10 sports video games that deserve remasters or remakes in 2020 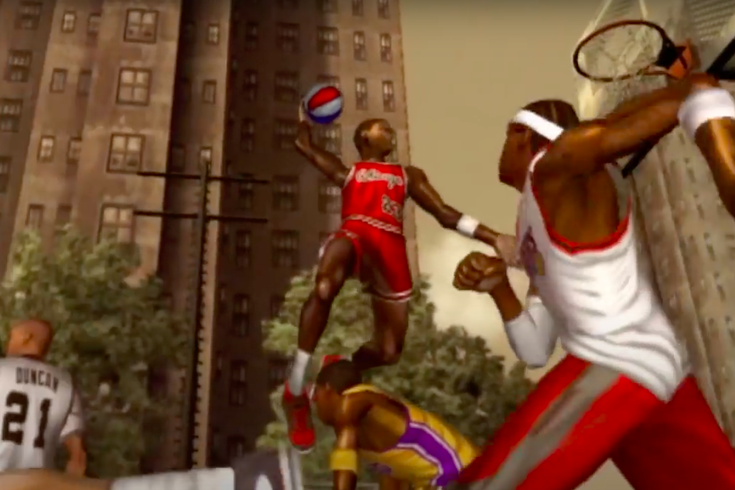 NBA Street Vol. 2 was a classic.

Tuesday was a big day for anyone who grew up on the Tony Hawk's Pro Skater games, with the legendary skateboarder and Playstation announcing the first two games in the beloved series would be remastered and released on September 4th of this year. If nothing else, they're a reminder of a simpler time at the turn of the century when people weren't afraid to go outside or eat at an Applebee's.

While remastering games rather than making something new can lead to some creative fatigue in the video game industry, making something old new again can also help us reconnect with some old classics. And since sports aren't on at the moment, what better way is there to do that than strolling down memory lane with some classic sports games?

Here are a few games and series I'd like to see return in the not-so-distant future.

(Honorable mentions to a few that I either don't care enough about, are too sameish to other games on the list, or just simply missed the cut: FIFA Street, WWF No Mercy, and Fight Night.)

To me, this is the holy grail of sports video games, and certainly of basketball video games. Vol. 2 took the formula of its excellent predecessor and dialed it up a notch, building the best three-on-three basketball game of all-time with absurd moves, the iconic gamebreaker system, and an elite soundtrack to match.

In the game's main mode, "Be A Legend," players assembled a roster of elite NBA talent from the early 2000's alongside legends and special fictional characters, traveling across the country for pickup games while songs from Black Sheep, Lords of the Underground, Pete Rock & CL Smooth, Nelly, Nate Dogg and more blasted in the background. There are even three different versions of Michael Jordan to add to your team — the high flying rookie, the leader of the 72-10 Bulls in 1996, or Wizards Jordan.

I would pay roughly $100 for an updated version of this with present-day players.

The snowbound cousin of the Tony Hawk series, SSX was an outrageously fun snowboarding series from the turn of the century, not coincidentally made by the same in-house dev, EA Sports BIG, that was responsible for NBA Street Volume 2. Like Volume 2, Tricky was an improved version of what was already a great original game, adding uber tricks (you could do the worm on your snowboard!) and a gratuitous amount of Run DMC to coincide with the game's title.

While other snowboarding games focused on the realistic, Tricky was purposefully over-the-top, featuring levels that included Tokyo Megaplex, themed after a gigantic, boardable pinball machine.

The Dynasty mode in NCAA Football is one of the most beloved game modes of all-time for good reason — you're involved in every step of building a program, from recruiting to winning titles to convincing your best players to hang on for one more season before chasing NFL glory. There were also more offensive options in the college game that reflected the stylistic choices of programs around the country, from spread offense to zone-read plays.

I hate to be the bearer of bad news, but these games are probably not coming back for the foreseeable future. After Ed O'Bannon successfully sued the NCAA on the grounds that using players likenesses in games was a violation of federal antitrust law, the NCAA decided it would rather continue not paying their athletes than allowing them to profit from future NCAA games. Perhaps they'll return one day, but I'm not especially optimistic.

Who doesn't love stepping into the ring as Little Mac and trying to chop down much bigger opponents with access to more elaborate moves? The Punch-Out series was terrific, and suffering through a few pummelings to learn opponent combinations and weaknesses made each knockdown and victory feel rewarding. And let's face it, there's no other boxing series where you can go up against an Italian opera singer turned circus clown* and Iron Mike in the same ring.

Good news on this front — Tyson said yesterday that he's interested in bringing this game back. Talk is cheap, but it's the arcade boxing classic would be just as fun today as it ever was back in the day.

*Yes, the characters often have elaborate backstories provided by the old instructional manuals. Mad Clown, whose only appearance came in the SNES version of Super Punch-Out, was said to have suffered a nervous breakdown during his singing career that prompted him to become a clown. Once he got sick of juggling and driving a car that was too small, he transitioned to boxing. The lore is deep.

In many respects, ESPN NFL 2K5 (which happened to have Terrell Owens in an Eagles jersey on the cover) has an argument as the best NFL game of all-time. Graphics have improved considerably over the last 15 years, but 2K5's presentation style allowed it to age much better than even some more recent football games. From basic components like the camera angles to a pregame SportsCenter segment with Chris Berman, it felt closer to real game presentation than its peers.

2K has shown they can make games feel better with an understanding of how much presentation and style matters — the first time you turn on NBA 2K11, for example, you go through the tunnel for a Michael Jordan introduction set to the iconic Alan Parsons Project song everyone associates with that team. None of that matters without the gameplay to match, and 2K5 made running the ball feel meaningful even at a time when Madden players were getting ahead of the NFL in going to pass-heavy offenses.

A truly absurd relic of the 90s, the Nintendo 64 classic with Wayne Gretzky's branding looks absolutely terrible by today's standards. But from the moment you turn the game on and hear the opening guitar riff, you are in for a thrill ride. The glowing rainbow puck, the over-the-top speed boosts, power shots that set the net on fire and turn the goal horn into a fire engine's siren, this game had everything. It was a delightfully 90's affair.

There's just one thing that would need to be adjusted for a modern audience: the game's absolutely absurd AI. "Rubberband AI" is a foundational part of a lot of sports games (including games like Mario Kart), but winning by blowout in 3D Hockey was simply not an option the game allowed. Get up by a few goals, and you can bet your ass the computer is going to pull some shenanigans. Watching your goalie turn into a six-foot block of swiss cheese was not especially fun.

Fun fact — this game originally was going to include fatalities following fights, a la Mortal Kombat, but it didn't make it into the final version. For shame!

Football doesn't have the same street elements and culture that basketball does, but that didn't stop EA Sports from trying to capitalize on the success of their NBA Street series by bringing it to other games. The result was terrific, adding flash and flare to football and allowing you to see what your favorite NFL players would look like playing both sides of the ball in a pickup setting. Michael Vick's speed, as it turns out, is fairly useful chasing guys down even if he's not much of a tackler.

A fun side benefit of the old Street titles is that EA allowed players who completed their "Own The City" mode in NFL Street 2 to be imported into Madden 06, in addition to a relatively deep team-building mode in the "NFL Challenge". There once was a time when giving players fun options without paying through the teeth for them was the standard, not an exception.

Like Tony Hawk's Pro Skater, NBA Jam was also brought back during the last generation of video game consoles in a 2010 multi-platform release (and an updated, download-only version that followed). That doesn't make it any less important as part of the basketball video game genre, and I would buy new versions of NBA Jam regularly if they were made available. Hot take — simulation basketball games mostly suck.

There is nothing quite like hearing Tim Kitzrow, the announcer of the series dating back to the early editions, bellow "He's on fire!" after you punch in a third straight shot. Bring back classic players and easter eggs, give us the modern NBA rosters, and let's cook.

If you're a Playstation owner, I think you're honestly in pretty good hands with baseball sims, as MLB: The Show is one of the best sports games year after year (and frankly works reasonably well as an RPG). But the demand for MVP Baseball's return will probably never go away, as MVP Baseball 2005 is widely considered one of the best sports video games in the history of the medium.

How good is MVP Baseball 2005? A modding community still exists around the game that updates rosters and keeps the game playable 15 years later. You can play the dynasty mode for up to 120 years, toy with multiple levels of minor league baseball, and the combination of great gameplay and mini-games (ramp hitting remains one of the best side modes ever) add up to one of the most complete packages in sports video game history.

(Personally, I would rather see something like Ken Griffey Jr. Baseball come back, but there are viable alternatives that exist there so I can't be selfish.)

I like games that understand who they're trying to reach and what sort of game they want to be. There is no bullshit to NFL Blitz — you are here to drive opponents into the turf, commit gratuitous acts of violence after plays are blown dead, and call plays from a simplified playbook that includes classics like "Da Bomb." It was completely over the top, and that's what made it stand out.

(As an added bonus, the GOAT Tim Kitzrow is the voice of NFL Blitz, so perhaps we can get this made in tandem with a new NBA Jam.)

Unfortunately, this may be the least likely title to come back on this list, at least with official NFL branding and players. It's a property they like to pretend doesn't exist so they can act as though they have consistently been concerned with player safety. The most recent game in the series, which dropped in 2012, removed late hits from the game at the NFL's request. Without the comical violence and wrestling moves of the old games, it hardly feels like the same series.