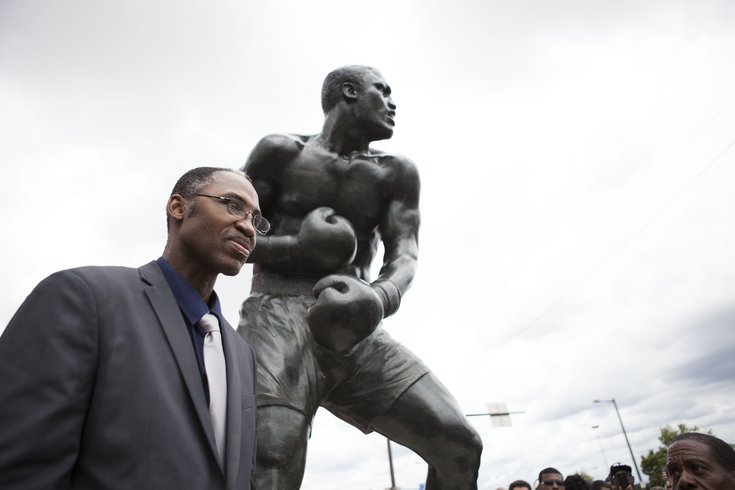 Marvin Frazier poses for photographs in front of a 12-foot bronze statue honoring Philadelphia boxing legend Joe Frazier, unveiled outside the Xfinity Live! complex on September 12, 2015. The artist Stephen Layne recreated Frazier in mid-punch, depicting the moment after Frazier landed the punch that knocked down Muhammad Ali in the fifteenth round of their fight on March 8, 1971, at Madison Square Garden.

There was a visceral tug on Bryant Jennings. The Philadelphia heavyweight contender who gave Wladimir Klitschko his toughest fight in years back in April didn’t want anyone to see how it affected him when the Joe Frazier statue was unveiled to the public in a ceremony held in front of Xfinity Live! on an overcast Saturday afternoon.

But it wasn’t only Jennings touched by the statue of a man who went largely underappreciated thanks to the huge shadow cast by Muhammad Ali; it was the whole rich boxing community, which showed up in force to remember and commemorate a great champion who at one time was the fighting heart and soul of a fighting city.

There was almost an audible sigh that said “Finally” when the tarp was pulled, revealing sculptor Stephen Layne’s fine work.

"It’s more than an image. The image is a reminder of what hard work, determination, what overcoming and perseverance can do."

“When they pulled off the wrapping of the statue, you could see people get emotional and it was like Joe Frazier finally got his just deserts,” Jennings said. “For the Frazier family, it’s important for them, because his death (Nov. 7, 2011) is not that far gone. It was an emotional thing. It’s a proud thing, an about-time thing, but most of all it’s a good thing. We weren’t dwelling on the time it took to happen, we’re just happy that it happened. For me, being in this position as a heavyweight contender from Philadelphia, living in Philadelphia, it makes me proud personally and look forward to something ahead if my career goes the way Joe’s did.”

Playing a very instrumental role in the statue being produced, and even putting a hefty personal sum of over $40,000 himself, was future Hall of Famer and all-time great Bernard Hopkins.

“The Alien,” as he likes to call himself today, had the same emotional current coursing through him as Bryant. It wasn’t just Frazier being honored, Hopkins felt, as much as it was everything the Philadelphia boxing community, which is still very vibrant, stands for and what Frazier the man stood for. It was about those fighters in life who weren’t given any breaks on their upward arc.

“The statue to me is about respect, and what that man Joe Frazier did,” Hopkins said. “You take all of those good traits in all of us, and you take what Joe was about, and if we can use one of those things, if not all, and make that come to part of our life, that’s what the statue means to me.

"It’s more than an image. The image is a reminder of what hard work, determination, what overcoming and perseverance can do. You take the best of Joe and use that in your everyday life. You take that into your house, and then out into society. You take a page out of someone in his life who left a great message and Joe and others motivated me through the years. What I got out of this was not only paying homage, but taking all of the good Joe did and making it a part of our lives.”

Then Hopkins brought up an interesting point.

Originally from Germantown, B-Hop had many offers to leave his native Philadelphia and train elsewhere in the country, though he chose to stay and train in Philadelphia. It’s also what Frazier opted to do. Both wore the Philadelphia brand of fighter on their trunks.

“That’s very important to me,” Hopkins said. “It’s why I had to do something to make sure Joe’s legacy endured. I went to Golden Boy (Promotions, which put up $25,000 for the statue) and told them we have to do something for Joe’s memory. It’s nothing against the Rocky statue. I don’t care about that. This was about honoring a great fighter who touched lives in this city and had a way about him that you could approach anytime and anywhere. It’s why I dug into my own pocket for this project. Joe had to be honored. And I had to do anything I could within my powers to make it happen. I stayed in the city because I know what I needed to motivate me. It was the same way with Joe. People were always able to relate to Joe. I want the same feeling about me. I got my success not just from Joe, but from what he stood for and always be associated with Philadelphia.”

As for his peers, Ali himself forwarded a statement for the statue ceremony:

“I am very happy to know that Joe is being honored and memorialized in the city he loved, something that is long overdue. Joe was a great boxer and a worthy opponent in the ring. He always brought his best when he stepped over the ropes. My only regret is that Joe won't be there to share in the celebration but this lasting tribute will help ensure Joe's legacy lives on with each new generation.”

The Frazier family was there in full force as well. Weatta Frazier-Collins, one of Joe’s 11 children, stood smiling as the statue of her father was presented. There was a pang of emotion that hit her, too, momentarily, and then she remembered.

“My father, knowing him, would have wanted it this way,” she said. “He was a humble, quiet man and respected people and he would have fussed and complained saying something like, ‘There’s better things to do with that space and that money than to build some statue to me. Spend your money on something else like a community center, or something for kids.’ I know that’s what he would have said. But I think he’s at peace now, finally. He’s gotten his just reward. People will look at the statue and always think of my father, a great fighter, but a great man.”

Frazier-Collins said most of her tears were shed earlier on Saturday, when she, her brother, Marvis, and Gene Kilroy, Ali’s former business manager, went to visit her father’s grave.

Kilroy placed a wreath on Joe’s plot with a small note from Ali that said, “Until next time, I’ll see you in heaven.”