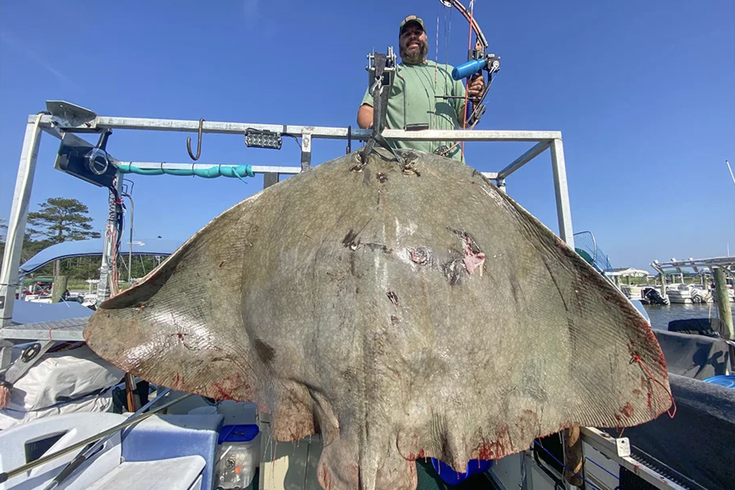 Jeremy Gipe, of Camp Hill, Pennsylvania, is pictured above with a record-setting butterfly ray caught during a bowfishing trip in the Delaware Bay on June 30. The ray measured 7 feet, 4-1/8 inches long and weighed 222.54 pounds.

A Camp Hill man who joined a bowfishing charter group in the Delaware Bay last month came away with a record-breaking catch.

Jeremy Gipe went out with Delaware-based Brossman Boys Bowfishing on the night of June 30 to try his luck with the experienced group, which holds a number of state and world catch records on different ray species.

The Delaware Bay is heavily populated with cow nose rays and southern rays in May and June, but gets an increasing number of butterfly rays heading into July. The diamond-shaped species is found in warm oceans worldwide and also wells in estuaries. They have short, small tails that don't possess a spine, meaning they don't sting and aren't a threat to humans.

Gipe, who's friends with the charter's leaders, Corey and Aaron Brossman, spotted a butterfly ray near the surface of the water around 11:30 p.m. and initially thought it was relatively small, Field and Stream reported. He aimed his arrow and nailed the ray in the head. Several more arrows followed from the other men on the boat, and they were soon able to get the animal onto the boat.

"I actually felt nauseous," Gipe told the publication. "I couldn't believe it when I realized how big it was."

When the group took measurements the next morning, the ray weighed in at 222.54 pounds and was 7 feet, 4-1/8 inches long. That tops the previous record with the Bowfishing Association of America, a 222.1-pound ray caught last year in Maryland by Nick Sampson.

The charter group filleted the butterfly ray, whose meat is sometimes compared to crab or pork.

Gipe, who occasionally goes fishing with the Brossman brothers, told Field & Stream he's not focused on records and just prefers to get out on the water.

Some of the Brossman Boys' bowfishing trips have been featured on the Outdoor Channel, The Sportsman Channel, The Hunt Channel and The Pride Outdoor Network. They also have a few of their trips floating around on YouTube, giving a sense of what it's like to go bowfishing for rays.