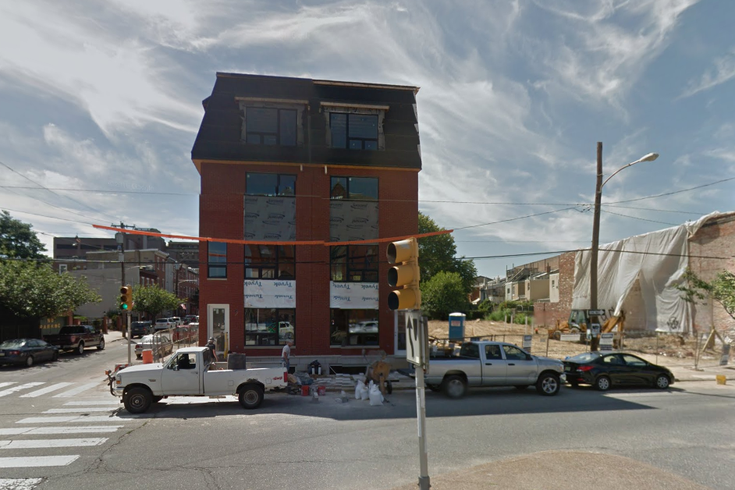 A view of the Constitution Court project at Third and Reed Streets in the city's Pennsport neighborhood. This Google StreetView photo shows the construction site in June 2014.

The city department of Licenses and Inspections issued stop work orders on Wednesday to temporarily halt construction on a residential project at Third and Reed streets in Pennsport.

The site, the former location of St. John the Evangelist Episcopal Church, is being developed as Constitution Court, a development of 12 rowhomes slated to be complete by the end of the year.

According to L&I spokeswoman, Karen Guss, inspectors at the site on Wednesday found that work was being done without the proper electrical, plumbing and building permits, as well as mechanical permits for two of the planned units.

In some cases there was no permit, while in others the permit did not reflect the correct address, a strict requirement, Guss noted. In addition, no permits were posted at the site and the contractor failed to schedule the required on-site inspection before beginning work, she said.

L&I has issued previous violations and stop-work orders at the construction site.

Contacted Thursday afternoon, Barry Sable, owner of the property and a well-known former jeweler, said the problems with the permits were nothing more than a "simple procedure."

"This is just a simple procedure," said Sable. "We should have all the permits tomorrow."

Wednesday's work stoppage was just the most recent issue in the long-winding history of this project.

Sable said that he and the city's electrical union, IBEW Local 98, have been at odds for years after he decided not to use union labor at the site due to cost constraints.

In fact, while Sable didn't say the union had a role in Wednesday's work shutdown, he didn't mince words in saying that the union has been a thorn in his side. He said the work will be completed as planned.

And, in an email to PhillyVoice on Tuesday, IBEW Local 98 Business Manager John J. Dougherty didn't exactly have kind words for Sable, either.

"‎Look who's breaking the law again," Dougherty said. "Barry Sable has a terrible history as a developer who constantly tries to game the system, flaunt the rules and ignore L&I regulations."

The vitriol between the two men goes back to at least May 2014, when Dougherty and construction workers on site were involved in an altercation where, according to reports from that incident, bricks were thrown between union members and nonunion workers.

In January, Dougherty and a non-union construction worker at the site were involved in another altercation over a union sticker affixed to the truck of a nonunion worker at that site.