The surprising Philadelphia roots of Name of the Year

'Nova may have won the national championship, but Philly is also historically well-represented in another annual spring tournament 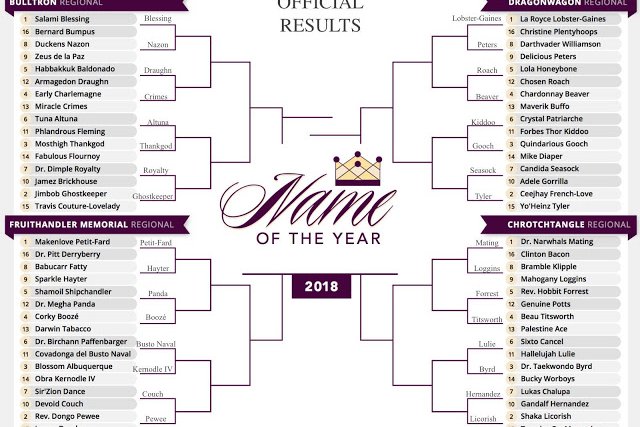 Kristen O'Callaghan /Name of the Year

The 2018 Name of the Year bracket (designed by Kristen O'Callaghan)

Everybody loves a great name. That’s been the impetus behind Name of the Year, an annual bracket of funny, cool and otherwise interesting names of people. It’s an institution that’s existed, in one form or another, for more than 35 years.

The Name of the Year competition was established, according to NOTY’s website, in order “to discover, verify, nominate, elect and disseminate great names.” The 2018 edition of Name of the Year got underway last month.

The tournament has thrived in the social media era, as the names are voted on online, with the brackets often hashed over on podcasts – because if there’s one rule of Name of the Year, it’s that the names are twice as funny when said out loud.

And there have certainly been great ones over the years: Recent winners include Assumption Bulltron, Shamus Beaglehole, Amanda Miranda Panda and 2017 champion Kobe Buffalomeat. And yes, the names are real. There have been various mini-scandals in NOTY history in which results have been invalidated on not-their-real-name grounds.

Not only have some of the better Name of the Year names over the years have come from Philadelphia, but it turns out the tournament itself began right here in Philly, on the campus of the University of Pennsylvania.

Stefan Fatsis, an author, writer for Slate, and host of the "Hang Up and Listen" podcast, told PhillyVoice in an email that he was among the founders of Name of the Year, along with a group of classmates in Penn’s class of ’85. The group included the respected sports documentarian Jonathan Hock and attorney Marc Handelman. Fatsis describes the circles subsequent careers as "your typical Penn medley: law, Wall Street, real estate, medicine."

“NOTY started with a couple of amusing names tacked on a dorm-room door (in the Baby Quad) and then a list on a wall in an off-campus house (on Locust between 40th and 41st) and then in an annual vote for the Name of the Year,” Fatsis said.

“There may have been a drinking game involved too.”

The Name of the Year tradition continued for quite some time after its founders graduated.

“NOTY really was just a way for a bunch of friends to get together once a year and continue a silly college tradition. Then one of us (not me) had the brilliant idea to turn NOTY into an NCAA-style bracket. Then came the internet and I started the blog and we eventually opened the voting to the public. Deadspin kindly hosts us every year now,” he said.

The original group continued to run Name of the Year until 2012, when they got too busy and the tournament didn't take place. However, a group of then-Northwestern undergrads who, Fatsis said, were “obsessed with NOTY," agreed to step up.

“Since then, they've assembled the master list of names from the hundreds of nominations we get via email, and the old and new guard get together one night and select and seed the field.”

Much like the similar group of men who started the first Rotisserie Baseball League, the NOTY founders never trademarked the idea and haven't ever monetized it in any away, although they have considered turning it into a book.

In addition to its Philly founding, NOTY has long featured a lot of locals in its bracket.

Nohjay Nimpson, a then-St. Joe’s track and field athlete, was the committee's choice as the winner of the 2010 edition of the tournament. Local journalist and novelist Mister Mann Frisby came in ninth in NOTY in 2002, a Narberth basketball player named Darwin Mushrush IV was a candidate in 2008 and local cab driver Happy Kumar was in the running in 2011. And the popular Internet writer Brian Grubb, a Temple grad, for years wrote under the pseudonym “Danger Guerrero,” which he pulled from the name of a Cuban ballplayer who was in the NOTY tournament in 2007.

Philadelphia is once again well-represented in this year’s tournament, with at least four competitors in the 2018 Name of the Year bracket having known Philly ties: Obra Kernodle IV is a former staffer to both former Mayor Michael Nutter and Gov. Tom Wolf who currently sits on the Pennsylvania Gaming Control Board. Mosthigh Thankgod is a Philadelphia native who played soccer for East Stroudsburg State in 2014.

Candida Seasock is a business advisor and president of CTS Associates, LLC., while Adele Gorrilla is a Wharton alumna who is now the chief investment officer of Zunis Investments LLC. Seasock and Gorrilla, in fact, squared off in a first-round matchup, which Seasock won. None of the four 2018 candidates could be reached for comment.

But there are other Philly NOTY candidates on the horizon. The Phillies, in fact, currently boast a collection of young pitching and hitting prospects who, in addition to their promising on-field skills, come equipped with NOTY-worthy names: Pitchers Sixto Sanchez, Seranthony Dominguez, JD Hammer, Adonis Medina, Jo-Jo Romero and Ranger Suarez, as well as third baseman Cole Stobbe.

How has NOTY endured for this long?

“NOTY's endurance has little to do with us and everything to do with names, and people's fascination with them. There really is something lovely and moving and curious and mysterious and poetic and, yes, sometimes hilarious about names and their aesthetics, and how and why people get them,” Fatsis said.

“Names have it all—rhyming, alliteration, imaginative spelling, impossible contrasts, the occasional punctuation mark. It isn't just us, of course. Onomastics—the study of names—is a real academic field. We just noticed this a long time ago, and have enjoyed gathering and sharing and smiling ever since.”