The grind never stops for Temple athletes trying to make the leap to the NFL level. 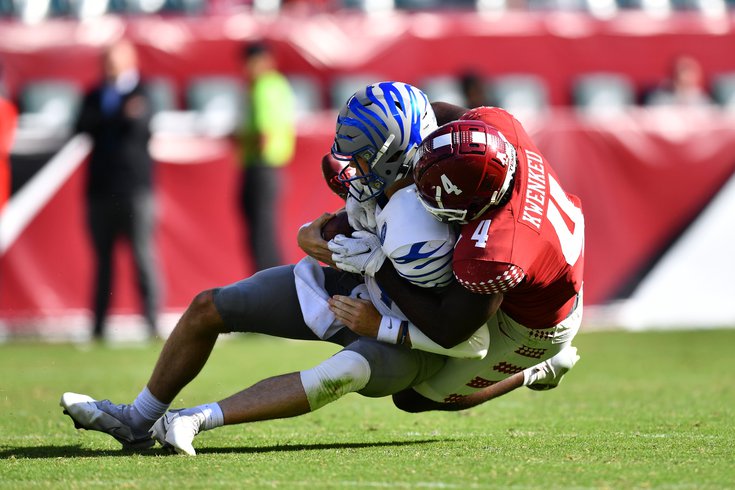 Temple football held its 2022 Pro Day on Wednesday afternoon. It feels fitting that the Eagles, fresh off signing former Owl and Camden native Haason Reddick, would make their presence felt there. Several Eagles staffers, including pro scout Ameena Soliman, were on hand. There were nearly 20 pro hopefuls working out. Besides the Eagles, there were a ton of NFL teams on hand between the Jaguars, Chiefs, Packers, Patriots, Giants and more.

A lingering thought I had while watching these players do the vertical jump, the three-cone drill and other classic combine activities is the drive that these players have. Are these guys who are going to get taken in the first round of the NFL Draft next month? No, they won't be. That's okay though. There is, however, a beauty here in the hardened world of professional sports brings. These are guys who are from the Philly area or went to college in North Philadelphia. They did not arrive in Tuscaloosa or Baton Rouge or Columbus with their football futures laid out in front of them with a path to stardom and the NFL that could be covered in the time of a 40-yard dash.

They worked so hard for this and they will have to work even harder to find themselves on an NFL roster this fall.

Very, very few athletes in any sport get to end their careers on their own terms. Even inner-circle Hall of Famers end up as afterthoughts as age comes for them. Not everyone gets to end up as John Elway, you know? To see guys attempting to make a leap and watch them make an impression on NFL decision-makers is what the grind is about and why sports as a whole remain such a fascinating aspect of the world.

I can't speak as to which players will find NFL glory one day. I can barely nail down a Day 1 and Day 2 mock draft myself. I talked myself into the Jalen Reagor pick, what do I really know? What I can say is that it feels representative of the culture Temple has cultivated itself and a macro-view of Phill wholly watching people work themselves as much as possible in achieving a lifelong dream.

There's William Kwenkeu, the second-most notable Cameroonian-born athlete playing in Philadelphia the last couple of years. There's Casey Williams, a transfer from Temple to Stony Brook who graduated from South Philadelphia high school and battled food insecurity in his life. It's not an easy ride.

This all really hit me when, sadly, I saw center C.J. Perez come up limp with what appeared to be a hamstring injury when he was running the 40-yard dash. Temple officials quickly tended to him to make sure he was okay, but, eventually, the drills continued on. It's a Herculean task to get in the positions these players are as they try to find their way to football's next level. For the slightest thing to go wrong for Perez, or any prospect, in this type of setting is brutal. Life's hard. Life sucks. These prospects persevere nevertheless.

Ultimately, it only takes these guys seeing someone like Reddick, a former walk-on at Temple who just got a contract worth up to $45 million with the Eagles, "make it" to believe that this grind is truly worth it.